Editor’s Note: This Q&A originally appeared in AG Tire Talk to provide answers that farm equipment dealers have about farm tire technology. This is a first in a series that will feature a trending question followed by an abridged version of the answers. For the complete answers, check out www.agtiretalk.com.

What is a Cyclical Field Operation Tire, when should grower choose “CFO” and what yield and productivity benefits can grower expect to receive?

Cyclic Field Operation or CFO designation applies to IF tires. Per the Tire and Rim Assn., the cyclic service is intended for use on a vehicle with a minimal requirement for torque transmission and with appreciable total weight fluctuations, like those on grain carts, combine and air seeders which are repeatedly filled up and emptied. Maximum loads cannot be carried for more than a mile at a time at designated speeds. CFO allows the IF an increased load capacity of 55% when operating under 10 mph and a 30% when operating 11-20 mph. The benefit for growers is that if the IF tire is properly inflated it will be operating at a 20% lower inflation pressure compared to its standard tire counterpart which equates to larger footprint and less ground bearing pressure, which means less compaction and ultimately higher yields if the conditions are right.

Standard non IF have a similar Cyclic Loading that they abide by. The definition of cyclic loading is the same, however a standard radial tire operating in a cyclic application may carry 55% more under 10 mph and 70% more under 6 mph with a 25% increase in inflation pressure with a minimum increase of 6 psi and a maximum of 12 psi.

*No additional load bonus for IF under 6 mph

As you can see from this example, there is a 12 psi difference in operating pressures in a cyclic application, which would equate to a larger footprint and less ground bearing pressure. However, one downside to IF in a cyclic application is the 15% loss of additional load capacity under 6 mph on tires with identical load indexes, which to some growers may be more important to them than the lower inflation pressure. Bottom line, I would suggest growers understand exactly what that piece of equipment weighs no matter what tire they have on it and set the inflation pressure appropriately to ensure they are running with the largest footprint possible to minimize compaction.

The Cyclical Field Operation designation has been utilized for tire inflation recommendations on combines and grain carts where load is accumulated and dispersed during harvesting operations. The CFO pressure recommendations allow for increased load carrying capacity due to the duration of maximum loads.

In recent years there have been advancements in tire technology with the development of “IF” or increased flexion and “VF” or very high flexion tires. This technology allows a tire to carry about 20% (IF) or 40% (VF) more load at the same inflation pressures as the conventional radial tires or the same load with a respective reduction in inflation pressures as well as having the increased load carrying capacity during cyclic field operations (CFO) during the harvesting process. 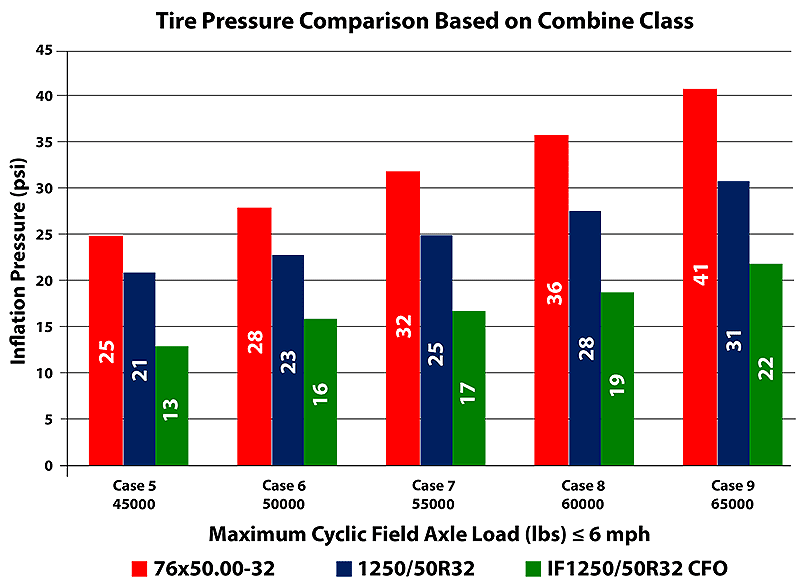 Cyclical Field Operation, or CFO, is a 55% load bonus given to specially designed and constructed IF tires while that tire is being used in a “cyclical” condition and operating at or below 10 mph. “Cyclical” means that the load applied on the tire is in constant flux during the normal operation of the machine on which the tires are fitted; the tires are engineered and built to handle the fluctuating load, including its peaks. The perfect and purest example of this application is a combine during harvest.

Consider the combine moving through a soybean field. The combine is moving at 6 mph and is using its header to harvest beans. The harvested beans move into the feeder house, through the separator and then are deposited into the grain bin of the machine. At the same time, the combine is actively transferring the harvested beans from the on-board grain bin into a grain cart that is following closely beside. During this time, the weight of the soybeans is a live load — their weight is flowing through the combine and then out to the grain cart, shifting from tire to tire. Ultimately, their weight is never constantly being applied to the tires.

This ability to handle massive spikes in load is a must-have for today’s harvesters. These machines have seen a more significant increase in weight than most other pieces of equipment over the last several years. The introduction of VF CFO technology has allowed equipment manufacturers to offer pneumatic solutions for harvesters that carry the load while putting minimum amounts of pressure on the soil. Minimizing soil compaction is increasingly important. The front axle of a loaded combine can weigh as much as a properly ballasted 4WD tractor.

It would be perfectly possible to carry the loads required by today’s combines with a standard radial tire. However, the air pressures needed to do this job would be incredibly high. A good rule of thumb is that for every psi in the tire, the machine exerts roughly 1.1x that pressure as compaction force into the soil.

Not all tires are used for the same operation and for that reason additional features have been added to several tire sizes to be more efficient and adaptable to a specific performance need.

In a normal operation, a tire generates a certain amount of heat due to the internal rubber friction. This is considered during development of the tire. If the tire is overloaded with more than it is designed to handle, the tire’s temperature will rise and create internal damage to the tire, accelerate wear and potentially separate the tread. A tire designed for cyclical operation takes into account this increase in heat and is reinforced internally to withstand this “temporary” overload.

What does this mean to the end user? The tires are stronger and heavier, but the main advantage is the possibility to reduce inflation pressure with a larger footprint and less soil compaction. When considering what inflation pressure to use, we must know the maximum load the tire can carry at a certain speed.

Cyclical Field Operation (CFO) tires are specifically designed for use on combines, cotton pickers and grain carts, where varying loads and reduced soil compaction is important to increasing productivity. The IF/CFO design allows for an increase in load carrying capacity, while not having to increase the air pressure. These tires are designed to carry more weight than the same size conventional radial tires and are constructed to withstand the extreme load changes that exist during harvesting. Since load weights are constantly changing — empty to full to empty again — the tires are given a 55% cyclic load bonus at 0-10 mph without having to increase the air pressure.

One benefit is that the IF/CFO rated tire can reduce ground bearing pressure and soil compaction, since it carries 20% more weight than the standard tire at the same air pressure. Another feature is that the air pressure can be reduced to carry the same weight as a standard tire, which also reduces soil compaction. Reduced soil compaction in the field equates to higher yields year over year. In addition, CFO tires can harvest larger quantities with less stoppage time, therefore increasing the farmers’ productivity. In some applications such as with grain carts, the IF/CFO tires are needed to carry the heavy axle loads. Remember that correct air pressure for the load is important when soil compaction is an issue.

Cyclical Field Operation (CFO) rated tires are designed with technology that allow higher carrying capacity without increasing air pressure during field work and typically found on harvest machinery and grain carts. Harvesters today are heavier than they have ever been. It is becoming more common to see hopper extensions, larger and folding corn heads, 18 row corn heads, etc. These machines are asking more than our standard tires can offer. Therefore, growers need to consider fitting their machines with CFO tires. Not only does a grower gain the additional carrying capacity without increasing air pressure, but he/she will also see an increase in productivity due to traction and flotation in damp soils and significantly lower soil compaction. As a byproduct, they should also see an increase in yield.

Bottom line, CFO rated tires are a great fit for almost all harvesting situations. However, not all CFO tires are the same. I recommend end users do their research. Understand the difference between IF, VF, IF CFO, VF CFO and variance in load indexes.  Any gain in yield goes to your bottom line. James Tuschner has spent 25 years in the tire industry, primarily focused on the agricultural and specialty tire markets. His experience includes time spent at Alliance Tire Americas Inc. (first as director of marketing, then as director of business development) and Denman Tire Corp. He started www.agtiretalk.com in 2016.

Compare & Contrast — Making the Case for Tires vs. Tracks

How to Properly Ballast a Tractor: Increase Traction & Reduce Fuel