Editor’s Note: Vince was the president of the Farm Equipment Manufacturers Assn. when Lessiter Media purchased Farm Equipment magazine in 2004 and began attending the meetings. He welcomed us into the organization and worked to make sure that we we were aware of and understood important distribution issues — often unintended byproducts of other decisions — that affected equipment dealers and their shortline equipment manufacturers. He was a champion of the shortline manufacturing industry and certainly held a presence at virtually every FEMA gathering our staff has attended since 2004. He will be missed. The news release below was shared by Vernon Schmidt today of the Farm Equipment Manufacturers Assn. (FEMA). If you’d like to leave a memory for Pam, please use the commenting field below. 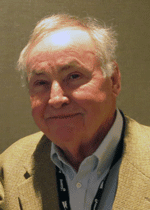 Vince Tomlonovic, a former president of this Association and committed advocate for the shortline industry, died at his home Wednesday, March 13. He was 75.

Tomlonovic retired late last year from his role as general manager at Hiniker Company, where he worked for decades. He was a mainstay at Association events throughout his career and was elected to the Board of Directors in 1997. He served as president of the Association in 2003 and 2004 and treasurer in 2005 and 2006.

In the 12 years that followed, he served as chairman of the Association’s Dealer Relations Committee. In that role, he pored over proposed legislation and spent hours in conversations in pursuit of the best outcome for shortline manufacturers.

Vernon Schmidt, executive vice president of the Association, said that in an organization “blessed with industry leaders willing to give their time and talent to our Association,&rdquo; Tomlonovic’s contributions “cannot be overstated.”

“I often referred to Vince as my ’senior policy advisor’” Schmidt said. “He served as wise counsel, patient advisor, and friend. The industry has lost a leader.”

As is often the case among Association members, friendships form at annual meetings and build into relationships that far surpass three-times-a-year get-togethers. Such was the case with Tomlonovic and Bob Atkinson, who served together on the Board of Directors. Atkinson responded to news of his friend’s death Wednesday.

“Vince was cut from a rare cloth indeed. He was principled and always honest, smart with a big dose of common sense, successful, knowledgeable about our industry, and always willing to do his part and more to help the shortline industry.” Atkinson said. “And, he was my very best friend. He will be missed.”

Among Tomlonovic’s survivors is his long-time friend Pam Oster.

Visitation is 4 to 8 p.m. Monday, March 18, at Northview — North Mankato Mortuary in Mankato, Minn. A memorial service is 11 a.m. the following day at the same location.

The Association will update this announcement as information becomes available.