The 5-day show, which is held every other year in Paris, France, drew a crowd that represented all sectors of the ag industry, including dealers, retails and distributors, crop and livestock farmers and researchers.

Among the well-established manufacturers exhibiting at the show was the Start-Up Village, which featured 35 young companies that were launching a number of products and services ranging from geolocation tools and agricultural robotics to the first crowdfunding site for agriculture.

This year’s show featured the second edition of SIMA Dealers’ Day. The session, which was co-organized with SEDIMA and CLIMMAR, addressed recruitment and employment across Europe. The panel featured association representatives from Germany, the United Kingdom, Switzerland, the Netherlands and France. The challenges North American farm equipment dealerships are facing are common in Europe as well. Gerrit Westers, manager of development at Aere Tech in the Netherlands, says there are over 1,000 job openings in the ag technical sector, mostly for mechanics, but only 300 students enter ag technical programs each year. And, he adds, that number is expected to drop by 21% in the next year. 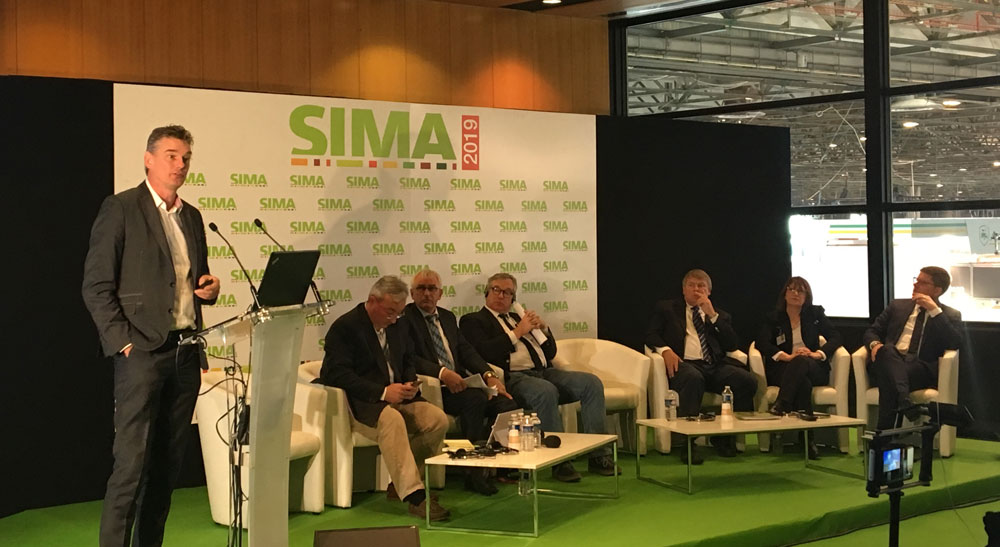 While each speaker presented a slightly different picture of the situation, the overall theme was that addressing the workforce problem will require a unified front by the industry worldwide.

Below are some of the highlights from the 2019 SIMA Show. 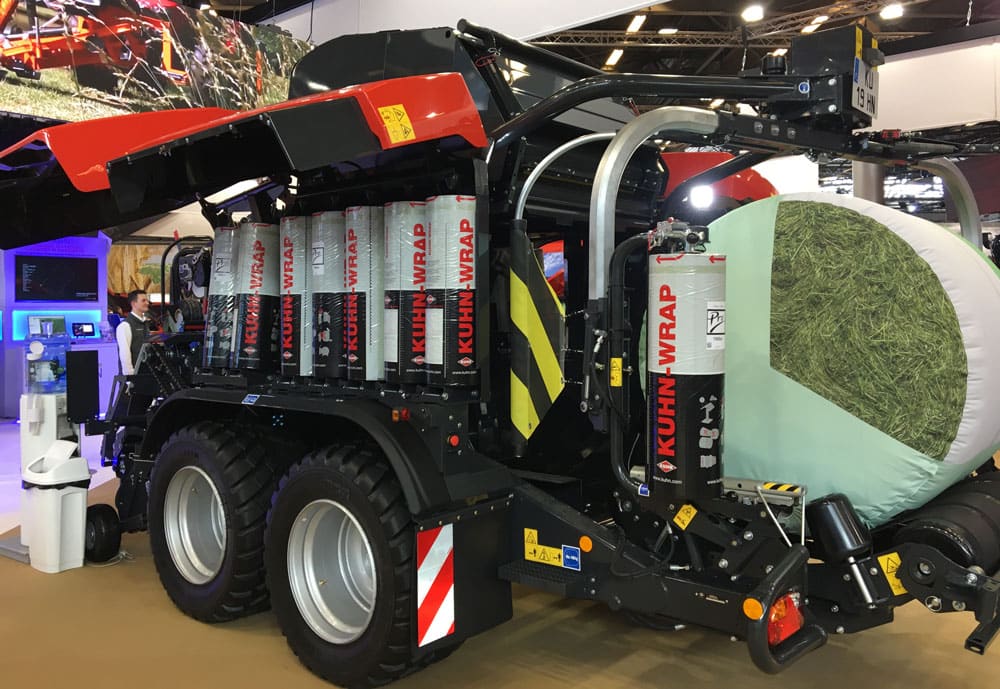 Kuhn's high density large square baler — LSB iD — is equipped with a double plunger TwinPact that allows it to increase the bale density up to 25% with a conventional sized bale. Leigh Poulson-Haynes says the baler requires less force to produce the same density, which means fuel savings for the farmer. The Integral rotor ensures consistent and optimum forage flow to the pre-chamber, regardless of conditions. 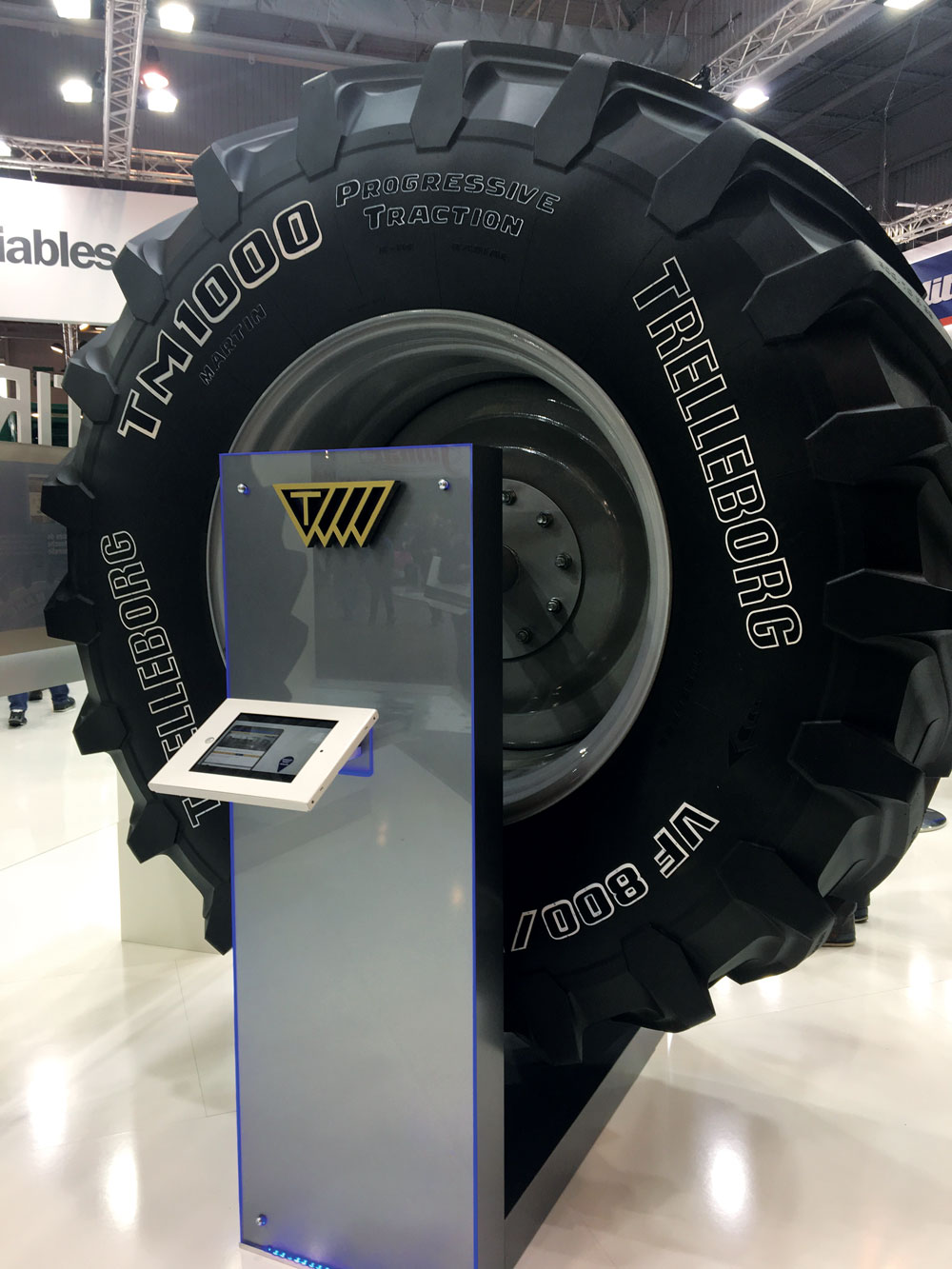 Trelleborg Wheel Systems showcased its upgraded TM1000 tire, which features its ProgressiveTraction technology. This technology releases additional power to the ground and reduces stress on the soil while boosting the performance of the machine for road applications. The tire is designed for high horsepower tractors. The company also featured its new TLC Plus App, which is now available from the Apple App Store and Google Play. The app is a sensor-based check-up system that measures potential tire pressure gaps between the optimum pressure and the actual tire inflation pressure and relays this information via wireless connectivity to a farmer’s mobile device or remotely to their computer. 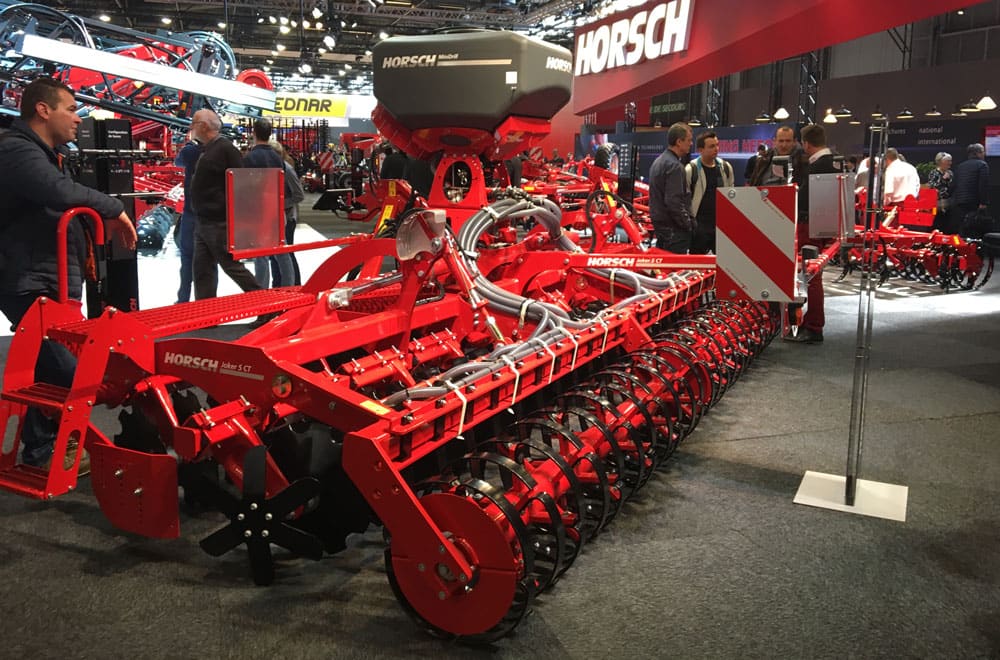 France is a growing and important market for Horsch’s tillage tools, and Remi Bohy says there’s a movement in the country to more shallow, minimum tillage. During SIMA, the manufacturer showcased its Joker CT, which is ideal for both shallow and more intense tillage. The Joker CT features 52 centimeter disc, 3-point linkage and 3-6 meter working width. A cross cutter roller can be added to the front of the unit to cut cover crops, according to Bohy. 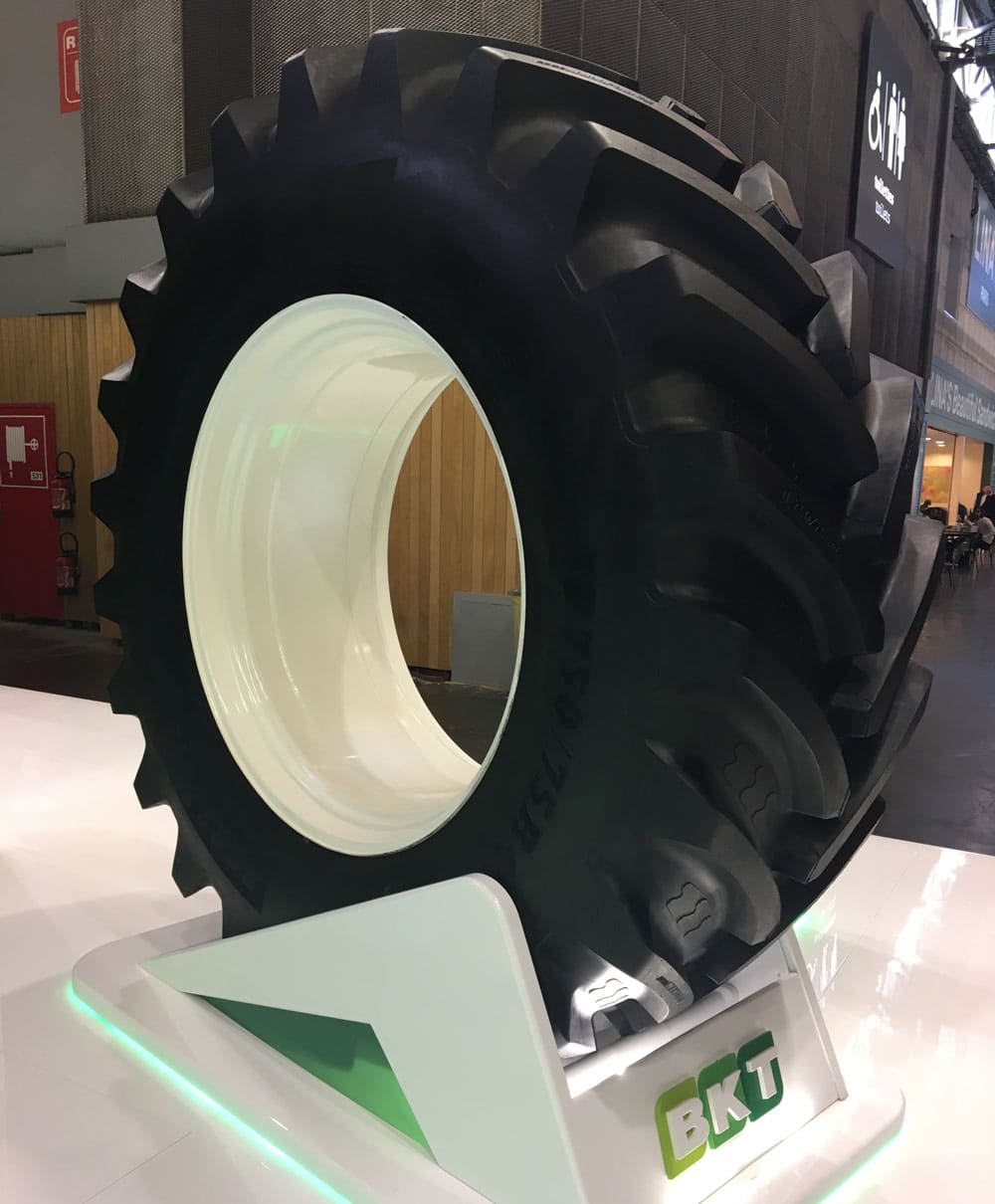 BKT’s world introduction of its largest radial ag tire produced to date — the AgriMax IF 750/75 R 46 — took place during SIMA. With a diameter of 2.3 meters, the tire is ideal for 250-plus horsepower tractors. Thanks to the IF (increased flexion) technology, AgriMax Force operates with a lower inflation pressure compared to a standard tire carrying the same load. In addition, it offers tillage equipment a larger footprint on the soil leading to high flotation capacity plus a uniform load distribution of loads at low pressure, the company says 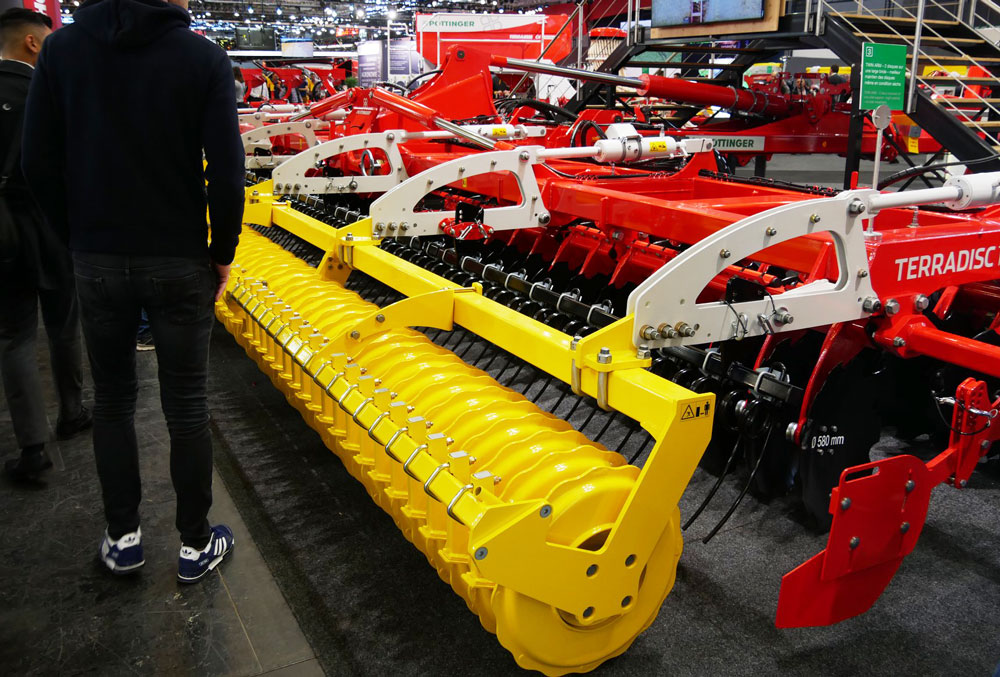 North America is a priority market for Pottinger, says TC Truesdell, director of global marketing communication for Pottinger. He also says the company is looking to expand its seeding and tillage lines in North America. In Paris, Pottinger introduced its new Terradisc 8001 T and 10001 T, which have an 8 and 10 meter working width, respectively, and working speeds of up to 18 kilometers per hour (about 11 mph). It offers the option of working depths from 5-15 centimeters. Despite its large working width, the Terradisc T is compact during transport. The chassis features an integrated folding and transport system for safe road transport with a transport height of 4 meters and a transport width of 3 meters. Air brakes or hydraulic brakes are available. 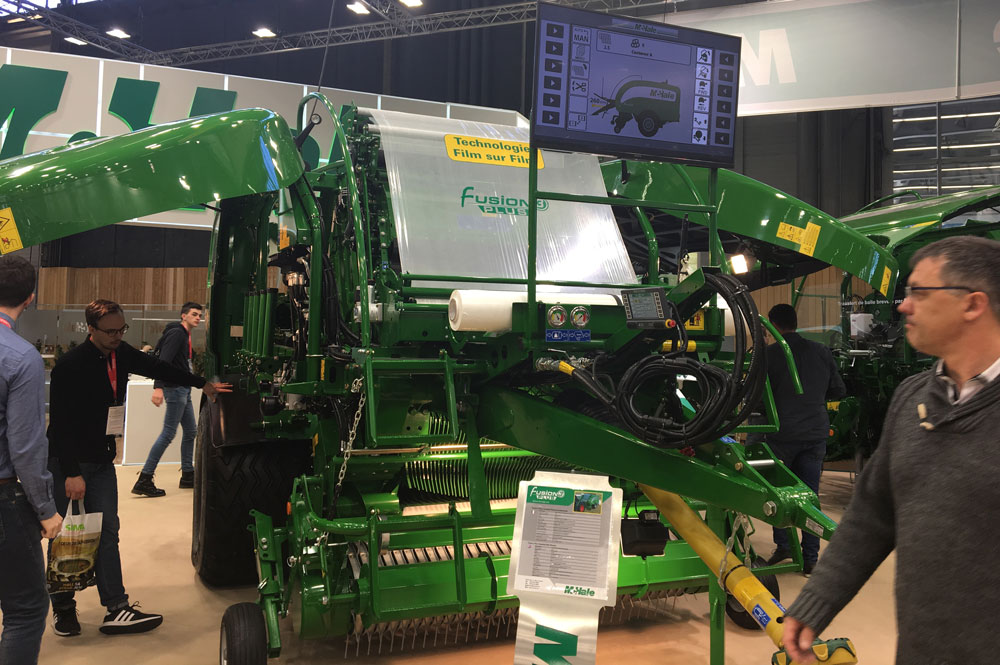 Irish hay & forage equipment manufacturer McHale had a number of new products displayed at the show. Among them was the Fusion 3 Plus, which has an integrated baler wrapper that gives operators the ability to apply film to the barrel of the bale, explains Eoin Clarke. The film is applied in the bale chamber, eliminating the need to use netwrap or twine to bind the bale together as it passes from the baler to the wrapper. The Fusion 3 Plus also offers a moisture meter and bale weighing option, allowing the operator to provide a recording of the average bale moisture content and the average bale weight of a job done for a customer. In addition to being displayed on the McHale I Touch control console, it can also be printed using an optional receipt printer, Clarke explains. The receipt includes the job name, the number of bales, how long the job took, whether the knives were up or down, if film or netting were used, and the average moisture and weight.