“AGCO delivered solid sales and earnings growth in the second quarter,” said Martin Richenhagen, Chairman, President and Chief Executive Officer. “Healthy industry conditions in Western Europe and improved market demand in North America supported sales and margin improvement in those regions offsetting weak results in South America. Our sales performance and customer response to AGCO’s new product line-up confirms our additional investments in product development are paying off. We continue to focus on innovative products like our new Rogator C-series high performance sprayers and our expanding line-up of platform designed tractors that deliver productivity on the farm and expand our market position.”

“Global crop conditions were mixed through the first half of 2018,” continued Mr. Richenhagen. “Crop production estimates in the U.S. have recovered following a cold wet spring, and forecasts are now calling for another solid harvest. The lack of spring rain across much of Eastern Europe and parts of Western Europe is negatively impacting crop development. A dry weather pattern across Argentina and southern Brazil has resulted in decreased 2018 crop production expectations.

“Global industry sales of farm equipment in the first half of 2018 were also mixed across AGCO’s key markets, with future demand dependent on factors such as crop conditions, commodity price development and government trade and farm support policy. North American industry retail sales were up in the first 6 months of 2018 compared to the same period in 2017 as row crop farmers are beginning to replace their equipment after years of weaker demand. Overall, we project industry retail tractor sales to increase modestly in 2018 with improved retail sales in the row crop segment and flat retail sales of small tractors compared to last year.

“Industry retail sales in Western Europe increased slightly in the first half of 2018, following a year of improved profitability by the arable farming segment as well as healthy economics for dairy producers. Industry sales growth in the United Kingdom and Italy was partially offset by declines in France. For the full year of 2018, industry demand in Western Europe is expected to be relatively flat compared to 2017.

“Industry retail sales in South America decreased during the first 6 months of 2018. Industry demand in Brazil softened in advance of improvements in the government financing program, which started on July 1. In addition, industry sales declined in Argentina in response to a weak first harvest. Industry demand in South America is expected to improve in the second half of the year and be relatively flat for the full year compared to 2017. Higher retail sales in Brazil are expected to be offset by lower sales in Argentina due to the impact of lower crop production on farm income. Longer term, we are optimistic about the fundamentals supporting commodity prices and farm income as well as healthy growth in our industry.” 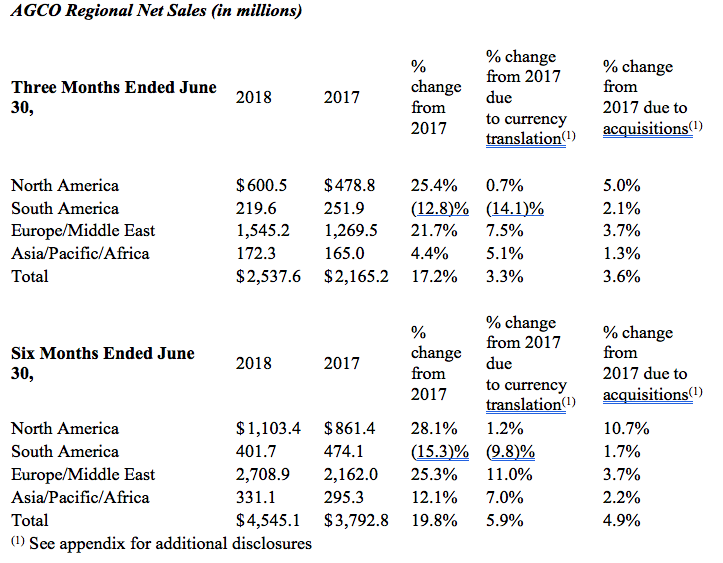 Net sales in the North American region increased 26.9% in the first six months of 2018 compared to the same period of 2017, excluding the positive impact of currency translation. Precision Planting, which was acquired in the fourth quarter of 2017, contributed sales of approximately $82.9 million in its seasonally strong first half. Excluding the impact of acquisitions and currency translation, sales grew approximately 16.2% compared to the first six months of 2017. The largest increases were in sprayers, high horsepower tractors and hay tools. Income from operations for the first six months of 2018 improved approximately $37.8 million compared to the same period in 2017. The benefit of the Precision Planting acquisition and higher sales and production volumes contributed to the increase.

AGCO’s net sales for 2018 are expected to reach $9.3 billion, reflecting improved sales volumes, positive pricing as well as acquisition and foreign exchange impacts. Gross and operating margins are expected to improve from 2017 levels due to higher sales as well as the benefits resulting from the Company’s cost reduction initiatives, partially offset by increased engineering expenses. Based on these assumptions, 2018 earnings per share are targeted at approximately $3.46 on a reported basis, or approximately $3.70 on an adjusted basis, which excludes restructuring expenses and costs associated with debt retirement.