Farm equipment dealers found success in their precision farming segment last year, building onto strong performances observed in 2016. The results of this year’s Precision Farming Dealer benchmark study show that in 2017 dealers had even more financial success than the year prior, which first marked a reversal in recent revenue trends. However, their revenue projections for 2018 are more conservative for high-end growth relative to last year’s results.

“Results of this study continue the positive outlook and results dealers had in 2017,” says Jack Zemlicka, managing editor of Precision Farming Dealer, a sister publication of Ag Equipment Intelligence.

Zemlicka adds that 2017 marked the second consecutive year dealers more than doubled their higher-end revenue expectations. In the 2017 survey, 15.4% of dealers forecasted revenue growths of 8% or more for the year and 10% said they expected similar revenue growth in 2016.

Of the survey respondents, 74% identified themselves as traditional farm equipment dealers. This is the lowest figure since the study began tracking business structure in 2015, beating out the previous low of 75.6% set just last year. Within this group of dealers, 30.4% reported precision growth of 8% or more, doubling 2017 projections (12.5%). Meanwhile, 23% reported growth of 2-7%, well below the forecast of 45%.

Independent precision dealers accounted for 16.9% of respondents, with 57.2% reporting revenue increases of at least 2%. Although they fell short of their 2017 expectations (80% forecasted a 2% or more increase), no independent dealers indicated a decline in revenue, consistent with the 2017 forecast. 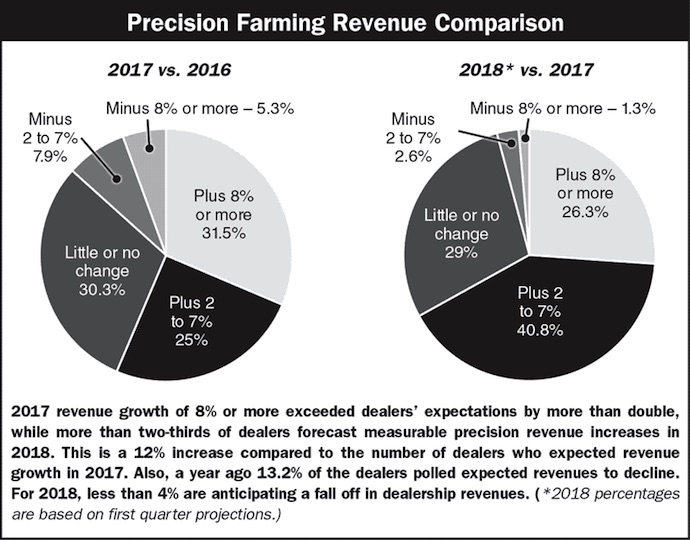 Looking at their current selling year, 67.1% of dealers forecast revenue growth of at least 2% over 2017, with 26.3% projecting growth of 8% or more and 40.8% expecting growth between 2-7%. This represents the highest total since the study began tracking revenue outlook 4 years ago.

If recent history is any indication, the results for 2018 may very well show more dealers ending up with higher revenue growth than expected, and vice versa for those landing in the more modest 2-7% growth category. Only 3.9% of respondents expect revenue declines of 2% or more this year, a record low. Only 2.6% are forecasting a drop in revenue of 2-7%, while 1.3% expect revenue declines of 8% or more.

One farm equipment dealer in Nebraska tells Zemlicka, “Validating the ROI from previous year’s field trials and demo plots show customers that precision is the last place they should be cutting their budgets. Most farmers have the equipment to use the data they collect, but they just don’t do it. We need to show them how and why.” 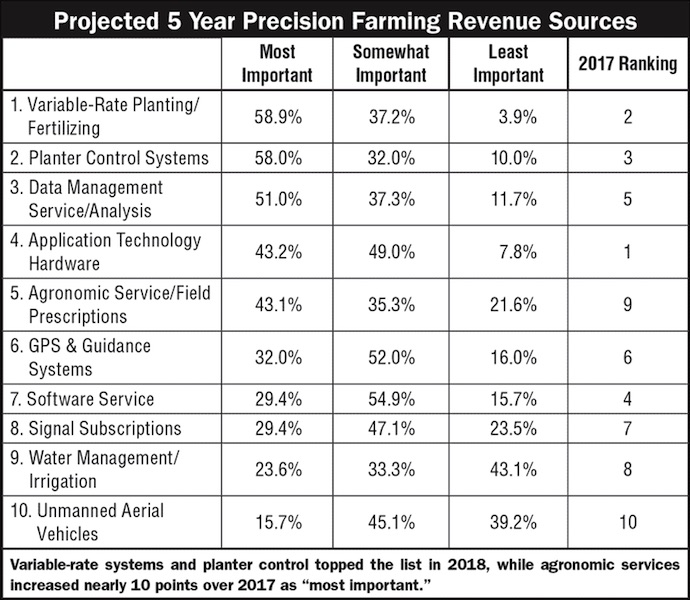 Meanwhile, application technology hardware saw a roughly 10% drop year-over-year. Currently, 43.2% say they view this category as “most important,” whereas in 2017 that number was 52.2%.