CALGARY, Alta. – Cervus Equipment Corp. (“Cervus” or the “Company”) today announced its financial results and operational highlights for the year ended Dec. 31, 2017. In addition, the Company announced that its Board of Directors has approved an increase in its March 31, 2018 quarterly dividend from $0.07 to $0.10 per share.

“I am pleased to report the substantial increase in financial performance in 2017, reflecting the collective efforts of our team in serving our customers, backed by our market leading original equipment manufacturers. These results were achieved through strength in our Agriculture segment and reflected in our record new equipment sales in the year. Further, I am proud of the efforts of our Commercial and Industrial team, which generated a $4.1 million increase in income before income tax expense, despite a soft C&I market. Based on this performance, we have increased the quarterly dividend to $0.10 per share,” said Graham Drake, President and CEO of Cervus. “We look to expand on these achievements in 2018, and to this end, we have made structural changes in our Ontario operations. I am confident in the team and their focus on delivering value to our customers’ businesses, while increasing our internal efficiencies as we execute our strategy through 2018.”

Highlights for the Year

Adjusted income before income tax expense increased by $10.0 million in 2017, compared to 2016. This was achieved through record equipment sales in the Agricultural segment, operational efficiencies in the C&I segment, partially offset by underperformance of the Ontario transportation dealerships. In the third and fourth quarters of 2017, actions were taken to reorganize Ontario transportation operations toward the objective of profitability in 2018.

Within the Agricultural segment, adjusted income before income tax expense increased $8.2 million, while income before income tax expense increased $1.1 million. This performance reflects the record new agricultural equipment sales achieved in 2017, a 20% increase compared to 2016. The increase in new equipment sales had a positive impact on original equipment manufacturer incentives received in the fourth quarter of 2017. Organic growth in parts and service revenue along with improved gross profit margins also contributed to the financial performance of the year, reflecting a continued focus on efficiently servicing our customers’ growing equipment population.

Within the Transportation segment, adjusted loss before income tax expense increased $3.6 million. A significant factor was the $3.5 million incurred in the year related to reorganization costs and valuation adjustments to the Ontario lease fleet. Loss before income tax expense increased $6.8 million compared to 2016, principally due to the non-recurrence of a $0.5 million gain on sale of real estate in 2016, $3.5 million of reorganization and lease fleet revaluation expenses, and a $2.8 million decrease in unrealized foreign exchange gains in 2017 compared to 2016. 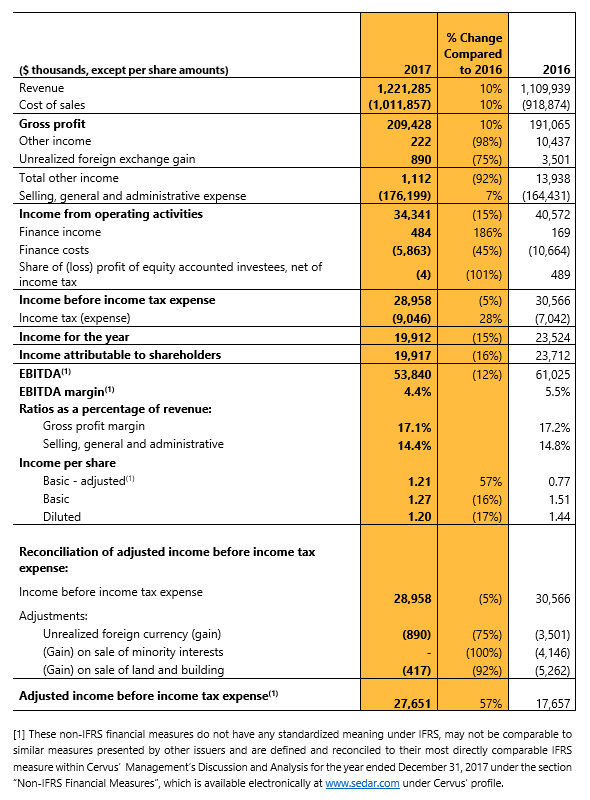 Cervus’ Board of Directors has approved a cash dividend to Cervus shareholders of $0.10 per share for the first quarter of 2018. Payment will be made on or about April 16, 2018 to shareholders of record as of the close of business on March 30, 2018.