For growers already utilizing irrigation to grow their crops, chemigation — applying agrichemicals through an irrigation distribution system — offers an alternative to other application methods. The method can be used to apply a variety of chemicals, from fertilizers to livestock waste, insecticides, herbicides and more.

Whether or not chemigation is the right application method boils down to choosing the best tool for the job, says Steve Melvin, irrigation application specialist with Lindsay. “There are places where chemigation would be more efficient and offer a cost savings and there are places where it would not. If you’re already running irrigation water and you want the product incorporated into the soil, such as with nitrogen (N) fertilizer, you can do all that in one pass with irrigation,” he says. For example, if you apply N to corn right before tassel time it’s going to be more efficient. The N moves right into the soil just as the crop is needing it which minimizes losses. “It’s kind of a win/win/win all the way around for chemigation,” he says.

If an irrigation system is already in place, there’s not much additional equipment needed to apply chemicals. Equipment needed includes a small chemigation pump, a tank to store the chemical (the size will depend on the chemical), a connection point into the water supply to inject the fertilizer into the water stream, and most importantly a check valve, says Jake LaRue, director of R&D, Global Irrigation Division for Valmont. The check valve is needed to ensure there’s no change of water floating back into the well or the surface water source. This is something most irrigation systems should have already, but some older systems, depending on the state they are in, may not. “They also need a power source for the pump itself. And normally it is three-phase, which is compatible with center pivots. Growers need to be sure they are wired into the safety circuit of the center pivot, so if the pivot stops, the pump also stops and they don’t keep pumping a bunch of material out,” LaRue explains. Figure 1 shows a typical setup for a chemigation system. 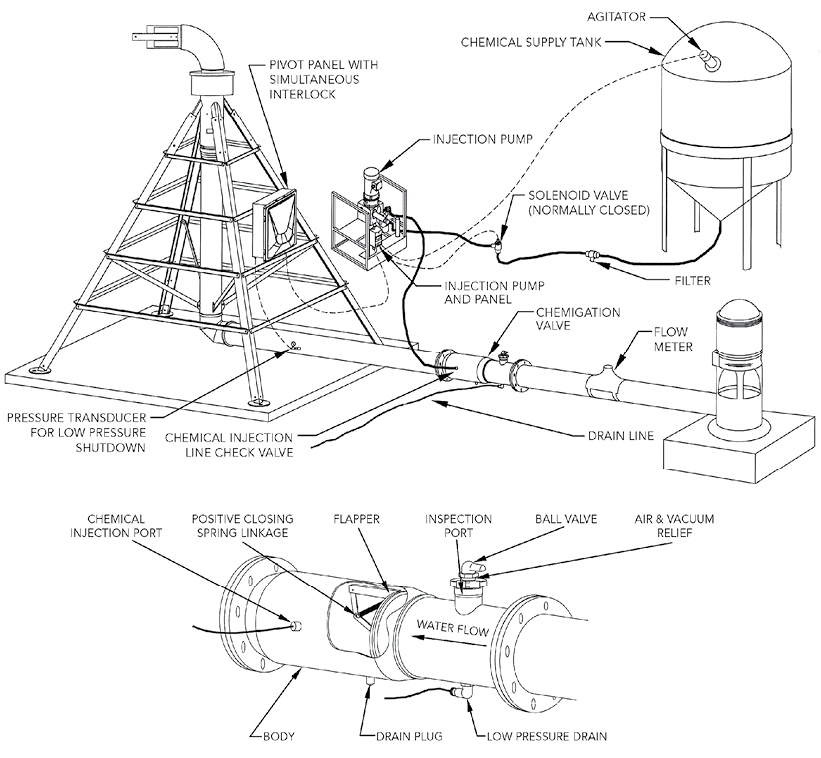 Figure 1: The diagram above shows a typical setup for a chemigation system. The chemical valve is a critical element as it ensures no chemicals flow back into the water source and contaminate it. Source: Growsmart by Lindsay

The number of pivots a grower has will determine what is needed in terms of chemigation, explains Neal Saxton, director of global sales for Agri-Inject. While it depends on the crop, he says usually there will be one chemigation system per every 5-10 pivots. Crops like potatoes that require heavier application use of chemicals, will need more chemigation units per pivot, he says.

According to a report from the University of Nebraska, titled “Using Chemigation Safely and Effectively,” some of the advantages and benefits of chemigation include:

“An additional benefit is that with today’s web-based pivot monitoring and control, like Lindsay’s FieldNET system, the progress of the application on one or several pivots can be closely watched remotely by the person responsible for getting the job done. Plus you have a record of the application.” Melvin says.

Chemigation requires very little work on the part the grower. “I’ve managed different farms at different times over the years, and to me the big advantage is I don’t have to do anything,” says LaRue. “I have to fill my tank, but once it’s calibrated and I’ve started, I can spoon-feed and apply small amounts [of chemical]. I don’t worry about it being lost. If I was using anhydrous in the fall or spring, there’s always the risk of losing some of that material through runoff, or more likely, through the groundwater.”

Being able to spoon feed the crops allows for a more precise application process, says Tom Palmertree, director of marketing for Reinke Irrigation. “You can vary your application of chemicals in a singular field, so you can apply a little more nitrogen here, a little less there, based on yield data, soil moisture, soil maps, things like that so you can get a little more detailed on how you apply your chemical,” he says. “The technology and equipment’s already in the field, you’re already using your mechanized irrigation system to irrigate. It’s a fairly simple process to upgrade and begin using it for a chemical application as well.”

While the advantages of chemigation are numerous, there are still some disadvantages. The University of Nebraska report lists the following:

The chemical being applied also needs to be considered when determining if chemigation is the right method. For example, you can’t apply Roundup via an irrigation system first because it is not labeled for chemigation, but also because it can’t be mixed with the amount of water used in chemigation. “The minerals in the water will tie it up and make it ineffective,” Melvin says.

He says it is important for farmers to check the labels of any chemicals they want to apply. “It will say very specifically on the label whether or not chemigation is legal. If it’s not on the label, it is illegal to apply it with chemigation,” he says.

Palmertree adds another drawback is the farmer is only covering the area of land that is under mechanized irrigation. “If you’ve got a pivot and it does not cover the corners, if you don’t have a swing arm corner, then you’re going to miss those corners as far as application of chemical,” he says

If a farmer doesn’t need to irrigate because the soil is already wet, then chemigation may not be the best application method. “With chemigation, you’re always going to put on at least about a quarter of an inch of water. Some pivots go a little faster and will put on a little less than that and some might go slower and put on a little bit more. But you’re always going to put on some irrigation water,” Melvin says.

While the technology used for chemigation is nothing new, Saxton says it is gaining in popularity as people continually see its benefits.

“Where it’s growing the most is where new pivots are going in. People are seeing the benefits who maybe have owned one piece of injection equipment per 5-10 pivots, now they are adding injection systems so they don’t have to move them around,” Saxton says. “They are seeing that benefit of spoon-feeding, and it’s hard to spoon-feed if you’re using one injection pump per 5 pivots. If you add another injection pump on a pivot, then you can supply fertilizer when the plant needs it.