Focus of Nutrient Application Technology Must Be the ‘4 R’s’

“The focus of the industry has to be the 4 R’s,” says James Fehr. “We’ve got to make sure we’re constantly talking about the right source, right rate, the right place, the right time.”

Fehr, general manager of the Application Division of Jenner Ag, a 3-store Case IH dealer based in Harristown, Ill., says nearly all of the available application technology today — from auto-steer to boom control and nozzle modulation — is aimed at application rate control.

For example, according to John Dobberstein, senior editor of No-Till Farmer, a growing number of producers are moving away from strictly applying nitrogen (N) in the fall.

“This is due to the threat of regulation and growing proof that a N can escape in the environment through volatilization or runoff and be wasted. With current corn and bean prices low they cannot afford this.” He adds, research is also showing that plants benefit by in-season additions of N.

Dealers like Fehr and Brent Wiesenburger say they’re advocates of splitting fertilizer applications. “Trending right now for us is split applications of N,” says Wiesenburger, precision ag manager of Wheat Growers, an ag retail cooperative based in Aberdeen, S.D. “This has become a very big talking point for us.”

In addition to buying grain and selling agronomy inputs, Wheat Growers is also a custom applicator. Wiesenburger estimates the co-op will reach 2.7 million acres of customer application this year.

How & Why of Splits

Both Fehr and Wiesenburger point out that, while the benefits of split fertilizer applications are similar throughout the country, how they’re carried out can vary depending upon the region. 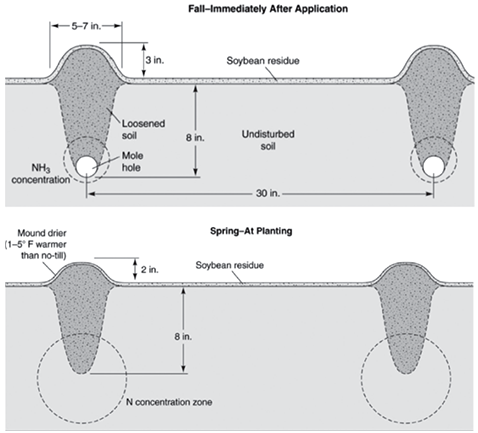 Brent Wiesenburger, precision ag manager with Wheat Growers, an ag retail cooperative based in Aberdeen, S.D., says he’s seeing significant pick up in the use of strip-till in his area of the country. He says the ability to place fertilizer underneath the seed is a big reason growers in the Dakotas are taking a hard look at the technique.

Strip-tillage combines the benefits of no-till and full-width tillage, but tillage is confined to 6-8 inch strips into which dry fertilizer and/or anhydrous ammonia and seed are placed. Crop residue in row middles is left undisturbed.

Wiesenburger explains that farmers in the area primarily practice no-till. “With strip-till, the ground temperature is warmer than that of no-till, especially early in the season, and this allows growers to get into strip-tilled acres sooner. And it also provides for a better plant stand. But placement of fertilizer is probably the number one benefit,” he says. “They can place all of the fertilizer, phosphorus (P) and potassium (K), right in the band underneath the seed, so a lot more of it is available to the plant.”

In central Illinois and central and northern Indiana, Fehr says, typically the grower will apply a base of anhydrous in the fall (if temperatures allow) or spring, or a pre-plant base of urea or UAN in the spring.

“For most producers in this area, the base will probably be about 100 pounds of anhydrous in the fall or liquid or dry in the spring. This is usually followed by whatever chemicals they choose to use in the spring as the second application,” he explains.

Some growers elect to go with a fourth application, according to Fehr, and this can be concerning. Some use the fourth application to apply fungicides, but in the case of a N application, “We have to be really careful that we’re not waiting too long, because if we’re over applying on that application and we’re not sucking that N up at that point, we are at risk of possible contamination of groundwater.

“We should really be sure that it would be a good rescue situation.

“If you’re doing a fourth application, I would highly recommend some type of tissue testing or soil testing, something to give you an indication of where you’re at as far as N levels. I wouldn’t just go out and blanket-apply a late fourth application. I think that’s very dangerous and I think that can cause as much of a problem as when we’ve applied anhydrous too early in the fall.”

How to Sell: No-Till Attachments

Dealers may want to take a closer look at no-till planter attachments. Tough, woody corn residue is your customer’s biggest challenge — and your biggest sales opportunity. From row cleaners to row closers and fertilizer applicators, it takes a very prescriptive approach to sell the no-till attachment that solves the problems no-tillers face with residue form today’s tough-stalk hybrids. No-till acreage is continuing to grow, and dealers who want to meet customer demand should take notice, if they haven’t already. Download now »

When it comes to agricultural application technologies, sprayers for liquid fertilizers and chemical have gotten most of the attention in recent years. But James Fehr, general manager of the Application Division of Jenner Ag, a 3-store Case IH dealer based in Harristown, Ill., says he’s excited about developments in spinner-spreader technologies for dry fertilizer applications. While there are several of these units available on the market, Jenner Ag currently handles New Leader’s G4 Edge box.

According to Fehr, the variable-rate nutrient applicator provides for precise boundary spreading with ISOBUS capabilities. “It utilizes a Pulse Width Modulation valve that manages the spinner speed so you can increase and/or decrease the speed and determine the width of the spread.

“In the past, to make sure they had everything covered with broadcast spreaders, farmers would overlap the application, which means they over applied. And if you’ve got a field that has waterways and a lot of ditches and a lot of boundaries, every time you go along that boundary, you’re throwing that fertilizer into a waterway, into a ditch. This is not where you want to be putting it, especially if you’re spreading urea or something that’s a high level of nitrogen,” says Fehr.

“It’s giving us the ability when they’re going along that edge to go into their controller and slow down that fan speed and actually pull in that overlap so that it’s not throwing it as far. This technologiy isn’t necessarily new, but now we’re bringing it into the application part of the operation in a different way. Now we can hold the fan speed as it’s going to the end or edge of the field and prevent fertilizer from ending up where it won’t do any good, and maybe even cause a problem.”

“We would typically split our N applications with one in the fall, but we would deduct maybe 70 pounds, or 70 units of N. We would then plan to do an in-season pass using a Y-Drop with liquid N and prorate top dress with a spinner spreader for dry granular materials. There’s been a lot of momentum toward these types of technologies recently.”

He says they can also apply some N at pre-plant or during planting. “This is something we’re probably going to promote this year.”

The major advantage of split applications is making N available at the time the plant most needs it. “We’re applying some fertilizer to corn in the V6 to V8 timeframe when it needs a little more N in its life cycle,” says Wiesenburger.

He adds there would most likely be some financial benefits for the producer if it can be shown there was a yield bump my managing N in this manner. “At the same time,” says Wiesenburger, “for us in the Dakotas, in some years we can get pretty dry. So if the yield potential doesn’t look like it’s going to be there, the producer just doesn’t spend the money on it. So rather than spending all that money up front, he can hedge his bet a little bit. He might choose to keep that money in his pocket rather than spending it on a crop that’s not going to give him the net return that he needs.”

According to Fehr, the number one benefit of split applications is that the farmer allows “Mother Nature to show more of her cards before they over apply crop nutrients.

“October and November is a great time to apply N. Often the soil is below 50 F so it was traditional to put on 200 pounds of N in the fall because you never know what Mother Nature is going to do in the spring or summer. We were just basically putting all our cards on the table. Split applications allow us to hold some of our cards until Mother Nature shows us more of hers. We’re not taking as big of a gamble.”

Another benefit with split applications, according Wiesenburger, is there’s less potential to lose N due to leaching that can occur when it’s all applied at one time. At the same time, he says, if the land isn’t tiled or doesn’t drain well, there’s danger in missing the window to get N applied if you get a lot of rain at the wrong time.