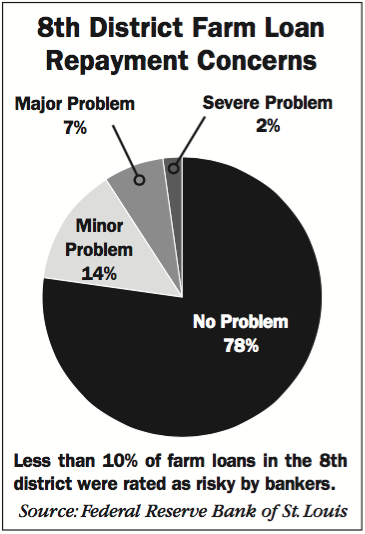 Amid ongoing weakness in commodity prices, Midwest and Mid-South farm income and quality farmland values continued to decline during the first quarter of 2016, according to the latest Agricultural Finance Monitor published by the Federal Reserve Bank of St. Louis (8th District) on May 12.

The bankers from the 8th District, which includes all or parts of the following seven Midwest and Mid-South states: Arkansas, Illinois, Indiana, Kentucky, Mississippi, Missouri and Tennessee, were also asked to estimate the percentage of their customers who have borrowed up to their loan limit. On average, they indicated only 34% of customers had borrowed up to their limits.