Looking for Long-Term Profitability? Do What You Do Best

Dealers must define their role and scope in precision farming to make a difference in their customers’ operations.

Dr. Tom Krill defines precision farming as a management concept that recognizes variability within the soil environment and maximizes economic agricultural production while minimizing environmental impact for a specific location. And to evaluate it’s effectiveness, precision farming must have measurable objectives.

Krill, founder of Precision Strategy LLC in Hopkinsville, Ky., has been working in the precision farming arena for more than 2 decades. His time in the field has been spent as a college instructor, in R&D for an equipment manufacturer and as part of the management team for an 8-store dealership.

He delivered the Summit’s keynote address that focused on attaining long-term profitability in the precision farming business. While much of the early effort to establish precision farming has focused on the technology, Krill says, “Technology is only the enabler of precision agriculture, not the driver. It’s about the plant and agronomy. It’s not about the equipment or the technology. It’s a management concept. All returns for the grower come from the plant. It’s about economics; it is about money, not yield. It is not about bursting grain bins or building more grain bins. It is about improving the producer’s bottom line. It is about money, not grain.” 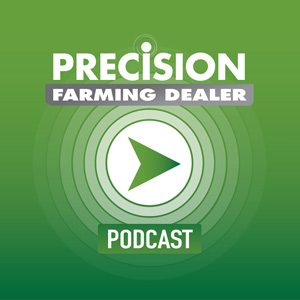 Interested in Listening to the full presentation from the Precsion Farming Dealer Summit?

In the FREE Precision Farming Dealer Podcast, we welcomed Dr. Tom Krill, to share his philosophy and experience-based analysis on four key considerations for structuring a successful precision department.

Krill says typically the first question he gets from farmers when discussing the potential of precision ag is, “What’s its payback going to be for me?” He says questions like these need to be answered with an equally pertinent question. “I ask them, ‘What are you going to change?’ If you do things the same way today that you did yesterday, there’s no payback. You’ve got to change,” he says. “You’ve got to make decisions based upon data. Then once you’ve made those decisions, you need to deploy them and carry them out. It’s a process.”

The same holds true for those selling and servicing precision farming. Each dealer, consultant and agronomist aiming to get into — or stay in — the business needs to determine at which of the three “Ds” — data leading to decisions leading to deployment — they excel and in which role on the precision farming team they can succeed.

Krill emphasized that it will take a team for precision farming to reach its full potential. “You’ll need to be part of the farmer’s team. You are going to have to participate and work with others in the industry who have expertise that you don’t have if you’re going to be successful. As I have said, it’s a system, it’s a process. You should only do what you do well. For the things you don’t do well, look for relationships and partnerships with the experts.”

For example, Krill says he’s not a big fan of equipment dealerships trying to be agronomists. “I just see too many conflicts and it’s probably not within the mission and vision of the organization. So when I look at it, it could be right or wrong in a particular dealership’s situation. But if you don’t want to do the agronomics part of it, let somebody else do it in partnership with your dealership.”

“I was one of the starting partners of a thing John Deere put together called Advantage Point Network. We had a good start. We did a lot of neat things. We had a leader and we were supported and we had a scope. We worked on it every day, trimming it and keeping it where it needed to be. When the leader and other key people retired, all of a sudden our scope and our targets exploded overnight. We were looking at this and then they wanted to look at that. Within 18 months it was over. Be aware of scope creep.”

Of the three Ds that Krill says are essential for a successful precision farming operation, he maintains that equipment dealers need to own deployment. “I want my people around the equipment we’ve sold. I want them to make it work. I do not want others playing around with it, even if they know what they’re doing. And this includes everything, from sales to parts and service. If my customer wants something different applied, I want to be the one they come to to figure out how to do it. If they have a problem, I want them to call me first. I want to own deployment.”

If the dealer owns the deployment part of implementing precision farming, they must be a relevant part of everything going into and out of that machine. “They need to adopt a ‘make it work philosophy,’” Krill says. “Today’s agriculture is not satisfied with mediocrity. Customers want, expect and will get the best.”

In other words, mediocrity and precision farming are not compatible. They cannot coexist in the same space.

Get Paid for It

What does it take to be profitable in precision farming?

He adds that getting customers to pay for precision farming is not science. “You need to make a difference in their operation.”

Looking Back … What Would You Do Over?

What Do You Do When a Customer Loses Trust in You?

The Power of Shared Beliefs: Market What You Believe, Not Only What You Do