2014 Most Profitable Year Ever for Ethanol Producers

While the future of ethanol is facing an uncertain future as the political battles about its usefulness continue, last year most U.S. ethanol producers were swimming in profits like they have never experienced.

According to a March 5 report by Scott Irwin of the University of Illinois’ Department of Agricultural and Consumer Economics, “The focus on the changing profit outlook for ethanol producers can obscure the fact that the industry is also coming off the best year it has ever had in terms of profitability.” The article, “2014 Really Was an Amazing Year for Ethanol Production Profits,” estimates ethanol production profitability in 2014 and compares the profits to those earned over the 2007-13 period.

The politics of ethanol is intensifying with the introduction of the Toomey-Feinstein “Corn Ethanol Mandate Elimination Act” in Congress on Feb. 26. According to reports, a variety of special interests have joined forces against the Renewable Fuel Standard, including poultry farmers, chain restaurant operators, cattle ranchers and oil companies who insist that the RFS isn’t working. At the same time, various industry groups are criticizing Toomey for saying ethanol drives up gas and food prices and Feinstein for her argument that corn ethanol is getting in the way of advanced biofuels.

But while Washington insiders drew battle lines, ethanol producers enjoyed the highest level of profits they’ve ever seen. According to Irwin, driven by the combination of relatively high ethanol prices and relatively low corn prices, profits averaged a record $0.54 per gallon in 2014.

“A new record weekly high profit of an astounding $1.61 per gallon was set on March 28, 2014. This dwarfs the previous record spikes in late 2011 and 2013. The record profits of 2014 are also part of the longest run of uninterrupted profits since we first began estimating margins in early 2007,” says Irwin. 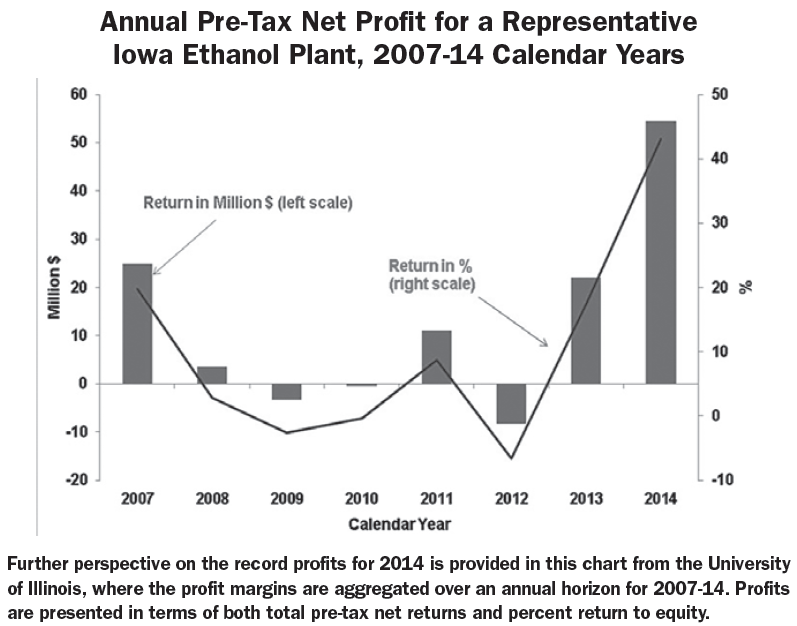 Using the model developed around an Iowa ethanol plant, Irwin says, “It was indeed a very good year for ethanol producers. Using the average net profit for the representative plant to make a rough estimate of profit for the entire U.S. ethanol industry in 2014, and assuming all plants in the industry earned a net profit of $0.54 per gallon, then, total ethanol production for the U.S. in 2014 of 14.3 billion gallons of ethanol implies aggregate industry (pre-tax) profits of $7.8 billion.”

Looking ahead, Irwin says, “The large profits of 2014 and 2013 will provide a much needed financial cushion as the industry faces a substantially changed profit outlook in 2015. The recent crash in crude oil prices ended the record streak of ethanol production profits that began in March 2013. The key question moving forward is whether 2013-14 profits were a temporary blip due to a unique set of circumstances or reflected a new normal driven by a robust ethanol export market.” 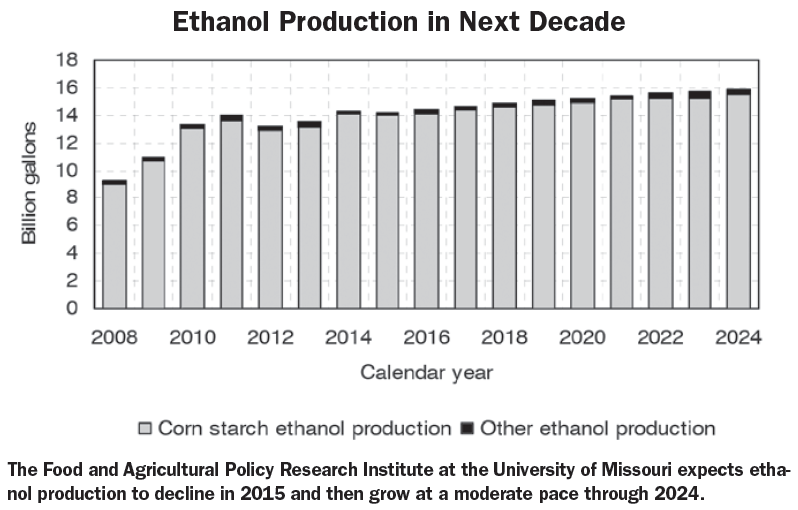 At least a partial answer to Irwin’s question may have come from the latest Food and Agricultural Policy Research Institute (FAPRI) at the University of Missouri. The “U.S. Baseline Briefing Book,” which focuses on projections for agricultural and biofuel markets, released earlier this month, says the record margins in 2014 lead to a recovery in ethanol production compared with 2012 and 2013.

FAPRI expects sugarcane imports from Brazil to continue at a very low level in 2015 before resuming some growth in 2016 and remain relatively flat through the reminder of the decade.

2014 Could Be a Challenging Year for Ag Equipment