Both U.S. ethanol prices and production fell in 2012 compared with the previous year. And the chances are good that it won’t get a whole lot easier for producers in the year ahead.

According to a January 31 report from the U.S. Energy Information Admn., spot prices for U.S. fuel ethanol were lower throughout most of 2012 compared to 2011. Prices were relatively stable during the first half of 2012, but rose at mid-year as a severe drought reduced corn yields, resulting in higher prices for corn that is used to make nearly all U.S. ethanol.

Ethanol spot prices rose from a low of about $2 per gallon in mid-June to a peak of $2.61 in late July. This was still 30 cents per gallon lower than the peak spot price at about the same time in 2011.

Higher ethanol prices during the second half of 2012 were mainly the result of higher corn prices, which rose 35% from mid-June through August because of drought concerns, coupled with triple-digit temperatures. On top of this, the 2012-13 corn crop is expected to be the smallest in six years at nearly 10.8 billion bushels, according to USDA’s January 2013 crop forecast, 13% smaller than the 2011-12 crop. 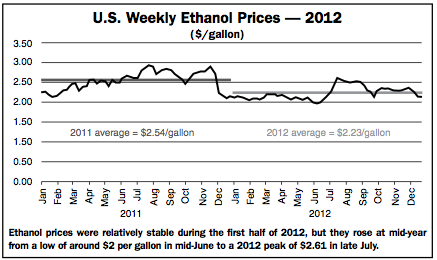 The combination of lower corn supplies, higher corn prices and weaker gasoline demand contributed to U.S. ethanol output falling from an average 900,000 barrels per day (bbl/day) during the first half of 2012 to an average of 815,000 bbl/day during the latter half. This was about 90,000 bbl/day less than in the second half of 2011, according to EIA data.

Partly because of lower domestic ethanol production during the second half of 2012, the U.S. became a net importer of ethanol in August 2012 for the first time since January 2010. This was mostly sugar cane-based ethanol from Brazil, that it exported through October 2012, according to the latest available data.

Most gasoline sold in the U.S. contains 10% ethanol by volume. However, gasoline that is 15% ethanol, which the EPA approved as E15 in 2011 for use in vehicles built since 2001, began selling last summer. The volume was extremely small as only eight fueling stations in Kansas, Nebraska and Iowa were selling it by the end of the year. 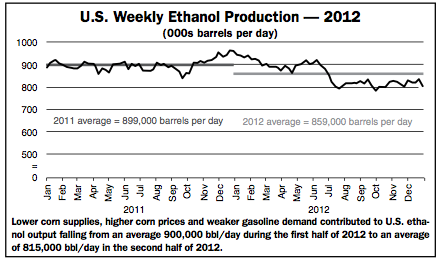 Bob Dinneen of the Renewable Fuels Assn., noted at the recent RFA conference that 2012 was a tough year for the ethanol industry and a perfect storm is brewing for 2013, and it will be tough to get E15 broadly distributed. There’s little support from the automotive industry, and little interest from the oil industry to provide E15. As a result, the industry will have to find new demand in an environment where adversaries are strong and working more effectively together.

In 2011, the EU tried to block ethanol based on an anti-dumping case and Brazil changed its blend to support its sugar industry. As a result, the U.S. is now a net importer of ethanol. Beyond demand, the most critical challenge this year is the Renewable Fuel Standard as lobbyists are gathering momentum, according to Dinneen.

Much of the talk centers on repealing RFS, not just reforming the fuel standard. At this time, it doesn’t appear there are 60 votes available in the Senate to support a repeal.

2014 Most Profitable Year Ever for Ethanol Producers

After a Decade of Rapid Growth, Corn Use for Ethanol Projected to Decline