Ag Commodity Prices to Rise in the Long Term

As the industry takes a bit of breather from a long, hard year, it’s a good time to ponder where commodity prices, which mightily impacted the ag equipment business, might be heading over the longer term.

According to USDA, prices for many major crops are projected to decline in the near term as global production responds to high prices of recent years. Nonetheless, after these initial price declines, long-term growth in global demand for ag products, a low-valued dollar, and continued biofuel demand, particularly in the U.S., the EU, Brazil and Argentina, hold prices for corn, oilseeds, and many other crops above pre-2007 levels. 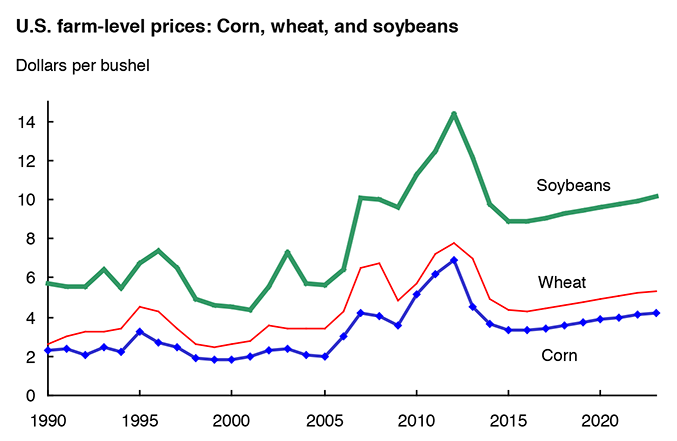 High commodity prices led to record values of U.S. agricultural exports and U.S. net farm income in 2013. Projected reductions in prices for most major crops over the next several years result in declines in export values and farm cash receipts through 2016. Export values and cash receipts then grow over the rest of the projection period as prices increase. Although farm production expenses also increase beyond 2015, net farm income remains historically high.

The continuing influence of several long-term factors — including global growth in population and per capita income, a low-valued U.S. dollar, increasing costs for crude petroleum, and rising biofuel production — underlies these price projections.

• Corn prices are projected to decline through 2015-16, but then begin increasing in 2016-17 as ending stocks tighten due to growth in feed use, exports and demand for corn by ethanol producers.

• Soybean prices initially fall from recent highs but then rise moderately after 2015-16, reflecting strengthening demand for soybeans and soybean products.

Prices in the livestock sector initially reflect responses to reduced feed costs as improved livestock-sector net returns provide economic incentives for expansion. Prices for hog and broilers generally decline in the first half of the projection period as production levels for those meats rise. In contrast, beef cattle prices rise as beef production continues to decline for several years. Increases in beef cattle, hog and broiler prices are generally less than the general inflation rate in the later years of the projections. 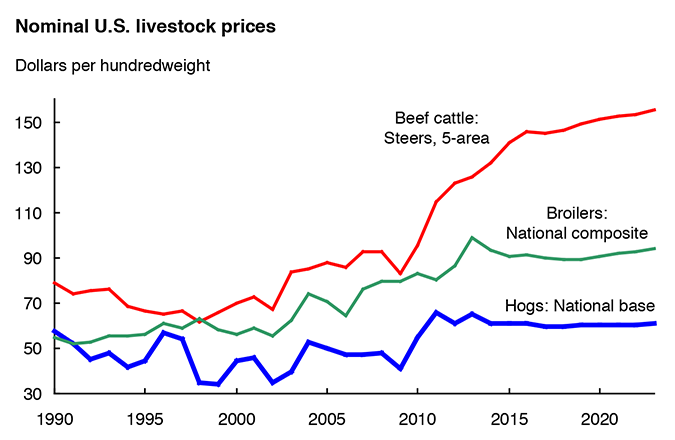 After declining in 2014-15, nominal farm-level milk prices are projected to gradually rise over the rest of the projection period, with increases less than the overall rate of inflation largely reflecting efficiency gains in production.

• Beef cattle prices are projected to fall in 2017 and then to rise more moderately than in the early years of the projections as beef production increases.

• Nominal prices for hogs and broilers have small increases over the last half the projection period as production gains for each slow.