'Early Orders' for Ag Machinery Down vs. Last Year 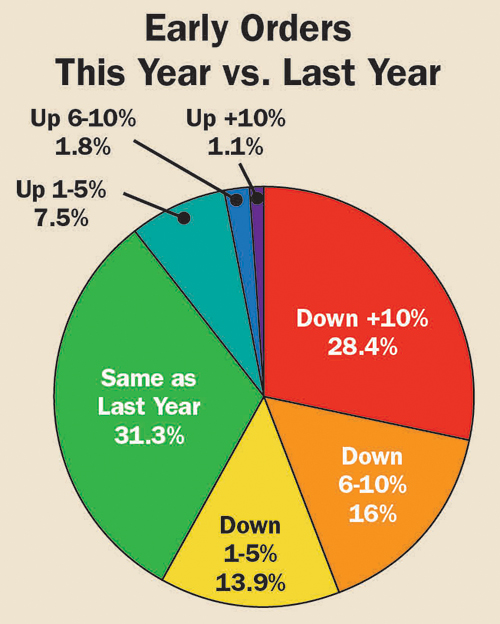 Final results from Farm Equipment's  "2015 Dealer Business Outlook & Trends" survey indicates that equipment early orders are down compared to what North American farm equipment dealers have seen over the past few years.

Slightly less than 10% of dealers say their early equipment orders are up so far vs. a year earlier. A year ago, slightly over 27% of dealers reported their presells were up compared with the previous year.

Several dealers noted that the uncertainty surrounding Section 179 and bonus depreciation is causing farmers to postpone commitments to purchase big ticket items. While some level of accelerated depreciation is expected to be passed by the U.S. Congress, a vote on the bill isn't likely until after the November elections. This would be well past the normal early order schedules set by the manufacturers. It's also not known what allowances will be built into the new depreciation rules.This year, just under 32% of dealers responding to the survey report their early orders are about the same as the year earlier. In the 2014 survey, 45% of dealers indicated their presells were the same as the previous year.

According to analyst's reports, while Deere and CNHI believe Congress will increase depreciation allowances before the end of the year, neither company has factored it into their 2015 forecasts.