Deere dealers were even more hesitant to take big equipment trades compared to other brands, as 70% of respondents who indicated Deere was their major brand were “less willing.” Case IH dealers weren’t too far behind in their view of high- horsepower trades over the past several months, as 67% indicate they, too, are less willing to accept these types of trade-ins.

In June, a net 36% of dealers reported used equipment inventory as “too high” (46% too high; 44% about right; 10% too low), according to the latest Dealer Sentiments & Business Conditions Update report released by Ag Equipment Intelligence. Year-over-year, used combine values fell in June vs. May by down 5.4% and used high horsepower tractors values also fell by nearly 1%.

UBS analyst Steve Fisher said in a note to investors, that he expects stiff headwinds to equipment purchases coming from shrinking demand in both 2014 and 2015, as well as dealers’ unwillingness to accept high horsepower trade-ins, falling corn prices needed to buoy demand and declining used equipment pricing and high inventories.

Fisher said the survey also revealed that most farmers are gauging the market before making a commitment to purchase new farm equipment this year.

“About half (51%) of the dealers responded that a higher than normal level of farmers are delaying their equipment purchase decisions to see how the crop year plays out. Given the 29% decline in corn prices since April 30, and with prices potentially under further pressure as weather remains supportive of high yields, farmers may have inadvertently exacerbated their exposure to lower commodity prices,” he said.

Some 47% of dealers say they aren’t seeing an unusual amount of hesitancy on the part of farmers in making their purchasing decisions.

Fisher added dealers appear to be bracing for a multi-year downturn given the current business conditions. 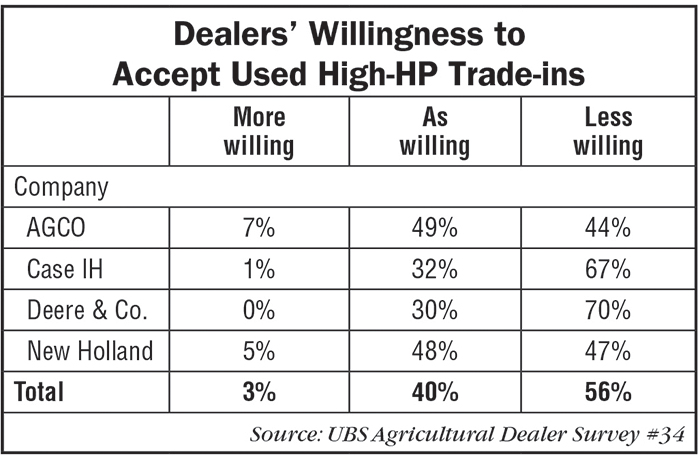 According to the 34th UBS Agricultural Dealer survey, dealers overall are less willing to accept used high-horsepower equipment trade-ins. Of those surveyed, Deere dealers were least willing to accept the trades.

The decline in North American large ag equipment retail sales continued in July, with 4WD tractor sales down 20.8% year-over-year and combine sales down 30.1%, according to the latest figures released by the Assn. of Equipment Manufacturers.

U.S. combine inventories were 1.2% lower in June vs. the same period last year compared to up 0.2% last month. July is typically an above-average month for combine sales, accounting for 11.5% of annual sales over the last 5 years. 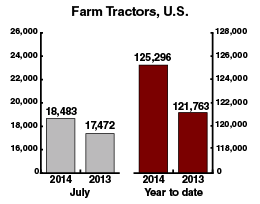 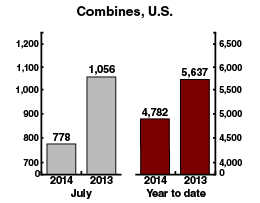 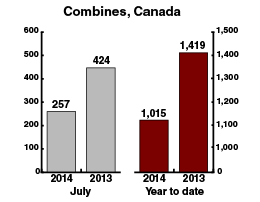