As the Federal Reserve backs away from its policy of quantitative easing that it has employed during the last several years in an attempt to jumpstart the U.S. economy, it’s expected to push up interest rates for borrowing. The immediate impact of rising interest rates is usually equated with pushing up product costs. But for farmers and others who have a large portion of their assets tied up in land, rising interest rates will also produce a “wealth” impact.

As Michael Boehlje points out, when interest rates go up they’ll increase costs and also decrease the value of capital assets, which means assets like farmland, which have been bid up to record levels.

As Professor Boehlje of the Dept. of Agricultural Economics and the Center for Food and Agricultural Business at Purdue Univ. projected during an interview with Ag Equipment Intelligence last year, as interest rates rise “We would expect to see less enthusiasm for buying farmland and there are some who believe we could even see some decline in farmland values. So rising interest rates has a cost impact as well as it has a wealth impact. And a wealth impact is really a big issue right now in agriculture,” he said.

This, of course, will weigh heavily in a farmer’s decision to make capital expenditures, including farm equipment.

According to the Economic Research Service of USDA, real estate assets (the value of land and buildings) play a major role in the U.S. farm sector financial health and outlook because it is a key input in agricultural production. Real estate has traditionally accounted for the bulk of the total value of farm sector assets — in 2014, real estate assets are expected to comprise 82% of total farm assets. 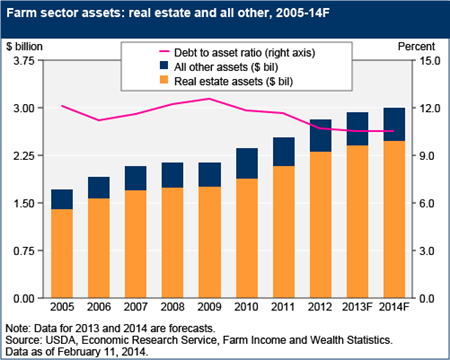 In addition, as the largest single component in a typical farmer's investment portfolio, real estate values affect the financial well being of agricultural producers and serve as the principal source of collateral for farm loans.