If sales of tractors and combines do slow in 2014, part of the reason may be attributed to the young age of the current fleet of farm equipment. With increased sales of farm equipment, particularly in the past 5 years, “the average ag equipment fleet age appears to be the youngest in the past 25-plus years,” says RW Baird machinery analyst, Mircea (Mig) Dobre. 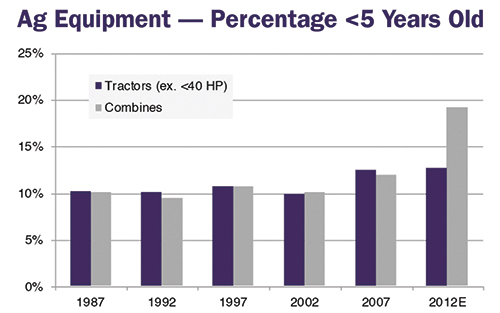 “Based on our estimates, as well as USDA and AEM data, the percentage of combines aged 5 years or less has increased to 19% in 2012 from 12% in 2007, while tractors, excluding those less than 40 horsepower, has increased to 13% from 12%,” Dobre said in a January note to investors.

At the same time, Dobre estimates that far more high horsepower and 4WD tractors are less than 5 year old, considering unit sales of these tractors increased by 34% since 2008. For the same period, sales of mid-size tractors (40-100 horsepower) were down by 24%.

This, of course, could create opportunities for increasing mid-size tractor sales. With livestock receipts forecast to outpace crop receipts in 2014, this would appear to be a favorable signal for possible growth of tractors in this category that are generally used by livestock operators.

A slowdown in lending for capital purchases contributed to lower farm loan volumes in the fourth quarter, according to the January 2014 Federal Reserve System’s Agricultural Finance Databook.

In recent years, strong incomes and tax incentives prompted many producers to upgrade or replace farm machinery and equipment, says Nathan Kauffman and Maria Akers of the Federal Reserve Bank of Kansas City.

But according to national survey data collected during the first full week of November, the volume of loans for farm machinery and equipment purchases dropped to the lowest level in more than 2 years. This drop occurred despite attractive loan terms of low interest rates and longer average loan maturities.

Farm real estate lending also eased during the fourth-quarter survey period. While farmland values generally were still rising, agricultural bankers reported gains had moderated from the brisk pace of the past few years.

North American large ag equipment retail sales increased in December, with 4WD tractor sales up 6.9% year-over-year, combines up 37.1% and row-crop tractors increasing 13.9%, according to the Assn. of Equipment Manufacturers. Inventory levels and days-sales of inventories rose across all large equipment categories year-over-year, which adds to the growing risk for inventory destocking in 2014 given projected sales declines, Mircea (Mig) Dobre, analyst with RW Baird, said in a note to investors. 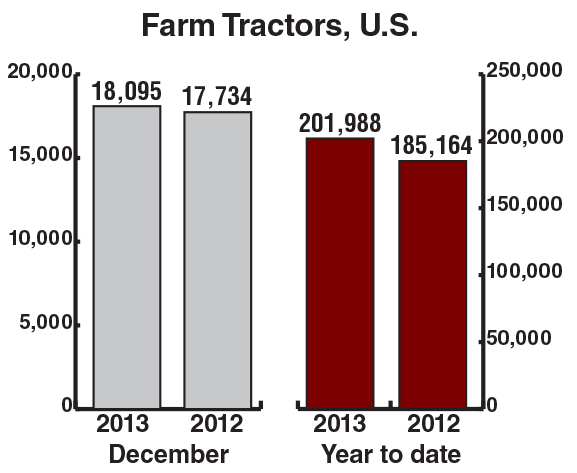 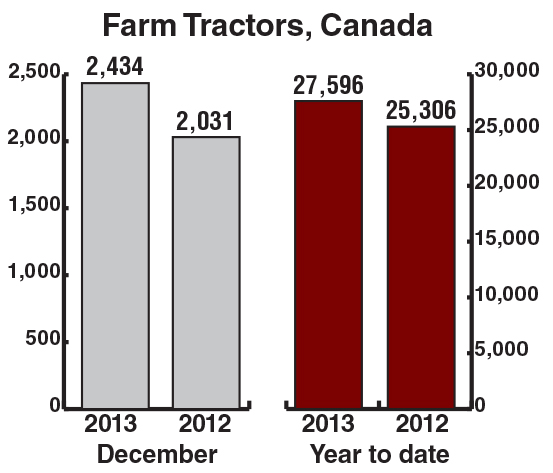 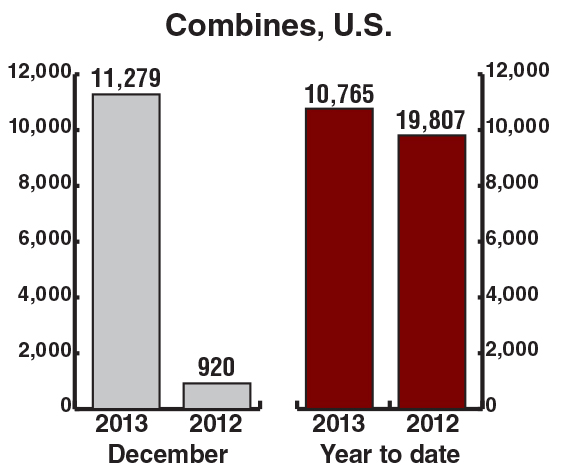 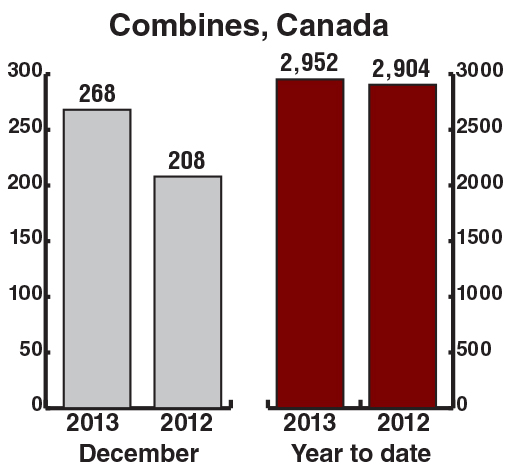