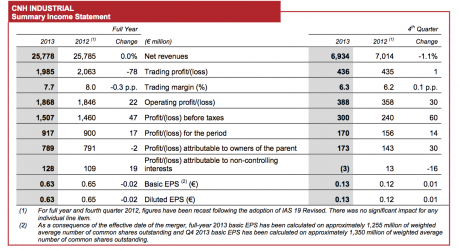 Group trading profit for the year was €1,985 million (trading margin of 7.7%), down €78 million largely as a result of negative exchange rates. On a constant currency basis, trading profit was in line with 2012 as higher volumes and positive mix in the Agricultural and Construction Equipment Segment and higher revenues and better capacity utilization for Powertrain compensated for Euro VI transitional costs and a less favorable product mix and pricing environment in the Trucks and Commercial Vehicles Segment.

For the fourth quarter, Group revenues totaled €6.9 billion, an increase of 4.2% on a constant currency basis (-1.1% on a reported basis) driven by positive performance for Agricultural Equipment, Powertrain and Trucks and Commercial Vehicles, partially offset by a decline in revenues for Construction Equipment due primarily to announced actions to realign dealer inventory to retail demand.

Group trading profit totaled €436 million for the fourth quarter (€435 million in the same period of 2012), with a trading margin of 6.3% (6.2% in Q4 2012). On a constant currency basis, trading profit increased by €21 million, as improved results for the Agricultural Equipment business, driven primarily by positive pricing.

Projected improvements in operating performances in the Trucks and Commercial Vehicles and Construction Equipment businesses, coupled with continued industrial efficiencies, are expected to offset the projected decline in unit demand of agricultural product equipment forecasted for 2014. Accordingly, CNH Industrial is setting its 2014 guidance as follows:

The Group will be releasing a new business plan in May of 2014 at an investor event to be held in the United States following the 1Q 2014 results release. Prior to the release of the 1Q 2014 results, the Group will be holding a conference call with analysts to present the changes from the 2014 transition from IFRS to U.S. GAAP accounting standards and the change from the euro to the U.S. dollar as the Group reporting currency, including a recast of prior years’ data.