New Holland’s T6 Series tractors has been further enriched by the addition of two new Auto Command tractors which feature a Continuously Variable Transmission (CVT). Two four-cylinder models are available: a T6.140 and a T6.160, providing up to 143 and 163 engine horsepower with Engine Power Management (EPM). 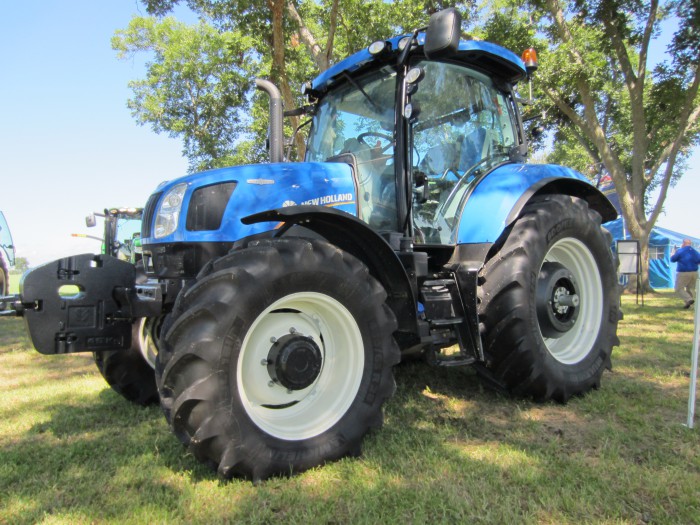 T6 tractors are fitted with the latest Auto Command CVT. Developed and manufactured in-house at New Holland’s transmission plant in Antwerp, Belgium, these transmissions are a further refined version of the CVTs found in T7 Series tractors.

The Command Grip joystick found in the new T6 line features the same forced-based operating logic that is used in other products today. The further the joystick is pushed, the faster the tractor goes. Eight different functions are also grouped on this joystick, which allows operators to raise their three-point hitch, shuttle forward and backward, and even adjust three target speeds. Speeds range from .02-mph all the way up to 31-mph.

This Auto Command transmission has been engineered so that it is most efficient at the most frequently used operating speeds for fieldwork and high speed transport, maximizing the amount of mechanical drive. Available in a 31-mph version, customers can reach top speed at lower engine speeds (1,750 engine rpm), which is ideal for farms that undertake extensive transport activities.

The CommandGrip, which features soft touch, backlit buttons, has been precision placed so that it nestles under the operator’s right hand. The fully integrated IntelliView III or optional, ultra-widescreen, 10-inch IntelliView IV monitor’s position has been optimized to ensure it corresponds to the natural line of sight while driving. The easy-to-use color touchscreen enables all operating parameters to be analyzed and changed while on the move.

The T6 Auto Command range benefits from the industry-leading Horizon Cab, which offers unsurpassed levels of operator comfort. New Holland continually strives for even greater agricultural excellence and following customer consultation, key controls have been grouped together in a roof-mounted position. The air conditioning controls, Bluetooth radio, and lighting control panel have all been clustered for easy operation. Storage has been further enhanced with the addition of two storage and charging points that are perfect for mobile phones and MP3 players. The rear tinted window reduces heat while an optional luxury pack includes a leather-wrapped steering wheel and a thick floor carpet for luxurious farming. The T6 Auto Command continues to offer both low-profile and standard roof variants.

In order to maximize productivity, the T6 Auto Command will be compatible with New Holland’s IntelliSteer fully integrated auto-guidance system, which is due for release at the end of 2013. When combined with New Holland’s PLM software, which can be used to create prescription-rate maps and manage in-field guidance paths, field working will be fully optimized. When RTK correction is used, pass-to-pass accuracy of 1-2 cm can be achieved, significantly reducing field compaction rates, optimizing valuable inputs, and lowering fuel consumption.

The 33 gallon per minute CCLS hydraulic pump is standard across all T6 Auto Command models. A key benefit of this large capacity pump is reduced fuel consumption. Not only does the large CCLS pump deliver oil only when demanded, there’s also less requirement to operate at a high engine speed just to deliver sufficient oil flow. The benefit is that the fuel saving potential of the Auto Command™ CVT can be utilized as much as possible. There’s no point in being able to travel at the desired forward speeds at a low engine rpm with a CVT if you then have to manually throttle up to deliver sufficient hydraulic oil flow. The T6 Auto Command is all about reducing operating costs.

The T6 Series benefits from New Holland’s state-of-the-art ECOBlue™ SCR technology for Tier 4A compliance. This highly-efficient technology will enable owners to reduce their fuel consumption by up to 10%, while simultaneously lowering their carbon footprint by up to 19%. Furthermore, productivity has been significantly increased due to the impressive Engine Power Management (EPM) feature, which provides up to an additional 33 horsepower when challenging operating conditions are encountered.

The four-cylinder design delivers outstanding maneuverability. The overall dimensions deliver unsurpassed handling on the headland and in even the tightest barnyards for efficient loader work.