The evolution of John Deere’s popular workhorse 8R Series Tractors continues in 2014 with the launch of six new wheel and three new track models, all with Final Tier 4 engines ranging in horsepower from 245 to 370. These new 2014 models integrate the latest technology to provide the utmost in power, comfort and performance for row-crop tractors in this class. 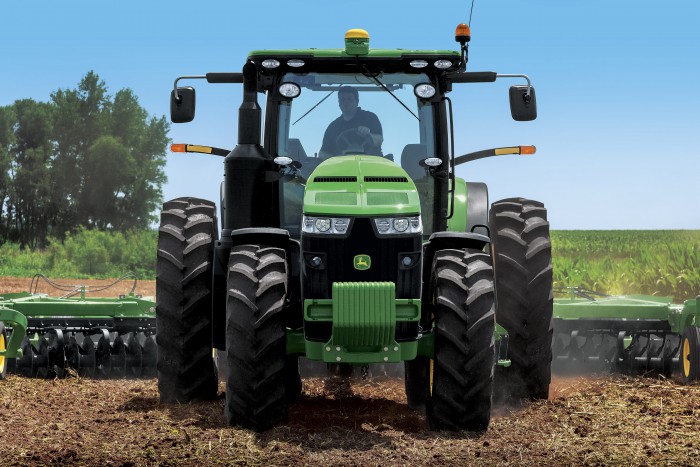 The new 8R/8RT Series Tractors feature a new CommandARM and a Generation 4 CommandCenter with 10-inch display, along with other cab improvements that enhance operator comfort and convenience. Additional new options include LED lights, larger wheels/tires, and increased hydraulic capabilities.

The nine new 8R/8RT models include:

“We’ve increased the engine horsepower ratings of all the new 8R models and boosted the max hydraulic flow capacity by 41 percent to 85 gallons per minute. This 8R option allows customers to operate at reduced engine speed while handling larger implements such as planters that require high, constant flow rates,” McGinnis says. “And all tractors have the opportunity to be equipped with Intelligent Power Management, which increases power and torque to maximize performance. In fact, with Intelligent Power Management on the 8370R Tractor, customers can boost engine performance to 405 horsepower.”

The new 8R Tractors are available with either 16-speed Power Shift or an IVT transmission. The 8345R, 8370R and all three track models feature the IVT as standard equipment. In addition, Group 49 rear tires are available on all wheel models which improves traction, increases load-carrying capacity, and reduces soil compaction in the field because of a larger tire footprint.

Another important new feature that customers will see on the new 8R/8RT Tractors is a completely redesigned CommandARM with improved ergonomics and integration of intuitive controls for the major tractor functions such as AutoTrac resume, throttle, transmission, SCVs, PTO and hitch. The CommandARM comes with a 10-inch 4600 CommandCenter Display that swivels with the operator and can be equipped with GreenStar software such as AutoTrac. The 4600 CommandCenter Display has 800 x 600 DPI resolution, one USB port, four video inputs, and has 32 GB of memory.

“The new CommandARM with the CommandCenter Display adds greatly to the improved operator control and comfort of the new 8R and 8RT Tractors. The new display is easy to use and operators can customize the pages to view the functions that are most important,” McGinnis adds. “It comes standard as a touch-screen display with video-streaming capabilities for remote cameras that could be attached to planters or other implements.”

Other changes include a new CommandView III Cab with a 40-degree right-hand swivel operator’s seat, which gives operators a more comfortable unrestricted view to the rear of the tractor and implements. Other features include choice of optional ActiveSeat or Active Hydro-pneumatic Cab Suspension Plus, the cab suspension system that automatically adjusts ride quality based on terrain and operator preference. New 8R’s also come with an optional refrigerator to the left of the operator’s seat.

“We’ve designed the new CommandView III Cab with laminated glass, a strategically placed insulation barrier, and an optional carpet floor mat to reduce noise and vibrations. Other enhancements include additional sunshades, window wipers, and improved key location, which are complemented by the swivel seat to make it a quieter and more comfortable work environment,” he says.

For customers wanting a track tractor, the 8RT models provide a highly versatile track platform with configuration options capable of meeting a wide variety of operations and row spacings. These new track tractors are enhanced with the same engine, cab, control and technology features highlighted with the wheel models. Both the 8Rs and 8RTs come with JDLink and John Deere Farmsight capabilities for improved visibility to operational and machine data via Wireless Data Transfer and Remote Display Access.

“The new 8R family of tractors provides the industry’s most advanced performance, power, comfort and technology features available in the 245 to 370 horsepower range,” McGinnis concludes.  “With the selection of horsepower and optional features available, these 8R / 8RT tractors will fit a wide variety of farming operations and provide years of reliable service in the field.”