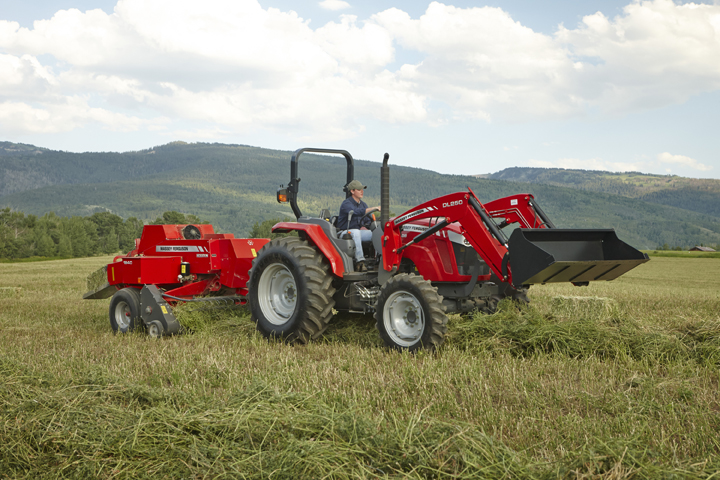 The two-twine, in-line MF1840 features a number of design enhancements that expand its capacity to bale a greater volume of hay more efficiently, even in challenging conditions. Plus, twine capacity has been increased by 60 percent for less downtime to change spools. The MF1840 balers produce 14-by-18-inch bales and replace the popular MF1839.

Whether you are a livestock owner baling to feed your herd or a professional hay producer, the MF1840 will keep you moving in the hay field, producing high-quality Hesston bales even in challenging conditions.

Improvements for All Conditions

The MF1840 baler features a redesigned cross auger on the hay pick-up to help bale more hay, more efficiently. The new up-turning auger provides smoother flow of a greater quantity of crop, particularly when working in damp or uneven hay. In addition, a redesigned packer fork matches the increased capacity of the pick-up auger, keeping the increased volume of hay moving efficiently into the bale chamber. These improvements mean operators can get out and bale more hay, even when crop conditions aren’t perfect.

Operators looking for extra performance can add an optional hydraulic density control, which senses the resistance of the bales sliding through the bale chamber and sets the bale tension accordingly. The system adjusts automatically to keep bale density constant even as moisture conditions change, eliminating the need for the operator to get on and off the tractor to fine-tune density throughout the day. Bale density is monitored from the gauges on the back of the baler and on the front shield, and bale density is adjusted using the control box, ensuring the right size, weight and density of bales for their operation. This optional package also includes a knotter fan that helps ensure debris is blown clear of the knotters for increased reliability and smoother operation.

Finally, a new adjustable hitch on the MF1840 makes it faster and easier to hook the baler to a wider range of tractor drawbars.

Twine capacity of the MF1840 baler has been increased to hold 10 spools, reducing downtime needed to refill twine. The 10-spool capacity is the result of a new spider-web spool design, which allows for more efficient twine storage. Fewer stops allow operators to bale more hay per day.

Bales of Hesston Hay are known to stack like bricks due to their consistent density, weight and shape. The MF1840 carries on the tradition, with a bale chamber that has been extended 18 inches longer than previous models to help maintain uniform bale shape and density in all conditions. Operators can produce heavier 14-by-18-inch bales, from 52 inches up to 70 inches in length.

All Hesston 1800 Series small-square balers benefit from the innovative, industry-exclusive in-line design, in which the baler follows directly behind the tractor in the same manner as a round baler. This means that each bale flake is already formed as it goes into the bale chamber, making the crop more evenly distributed to each side of the bale — resulting in uniform bale density from top to bottom, side to side and end to end. In-line balers also are easier to control and maneuver because there is no need to swing the tongue in and out while turning. Because field and road positions are the same, operators save time while moving between fields.