Market Factors Have Shifted U.S. Crop Acreage Toward Corn and Soybeans Over the Last Decade

May 31, 2013 — Over the last decade, the amount of U.S. acreage devoted to corn and soybeans has expanded while area of other field crops, such as wheat, hay, rice, and cotton, has tended to decline.

Improved varieties of corn and soybeans have, at the same time, expanded opportunities to produce these crops in drier and more northern regions traditionally limited to wheat or other grains. This chart is found in the June 2013 Amber Waves article, “Crop Outlook Reflects Near-Term Prices and Longer Term Market Trends.” 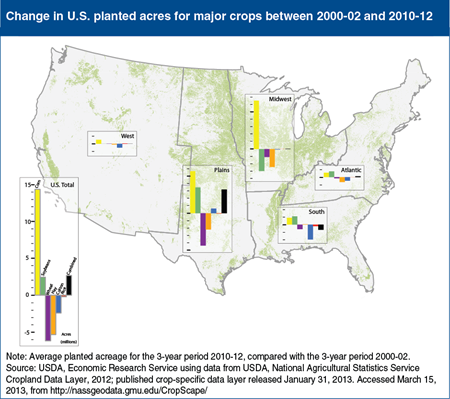