It may or may not come as a surprise to farm equipment industry observers, but the U.S. is not the biggest user of farm tractors on a per-capita basis. It's number two, trailing Canada as utilizing the highest number of farm tractors per 1,000 farmers. 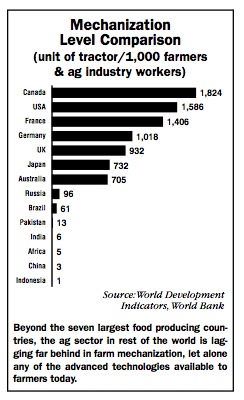 After that, tractor use in other countries falls off the cliff indicating that there's great potential to grow sales throughout many regions of the world.

After Australia, next on the list is Russia, which utilizes only 96 tractors per 1,000 farmers, followed by Brazil with 61. The rapidly developing economies in India and China are at the bottom of the list with only 6 and 3 tractors in use per 1,000 farmers, respectively.

In a recent press release from ag tire maker Titan Machinery, its chairman and CEO, Morry Taylor, said, "I am very upbeat on South America and Russia. Even if crop prices would drop 25%, areas like South America and Russia have a tremendous growth in agriculture equipment and mechanization. India and China, I believe, will not grow at such a rapid pace.

"If you look at this data, you notice that Canada has the most tractors per farmer with the U.S., France and Germany close behind. This shows how farming is a real export business for these countries. If you look at China and India, they have a real problem in feeding their own people. Russia and Brazil will grow their agriculture business. It will take time and it will not be all new equipment. Those countries will be buying up the Canadian, U.S., French and German used equipment as they grow their manufacturing base. Titan will benefit from this growth."

And, of course, even used farm machinery needs new tires now and then.