With that strong showing to kick off its current fiscal year, Deere also raised its earnings outlook for the year to $3.3 billion, and it forecasted that overall sales would grow 4% in the second quarter and 6% for the full fiscal year.

For North American ag and turf segment sales, the company raised its outlook to "flat to up 5%" from "flat" in its previous forecast. 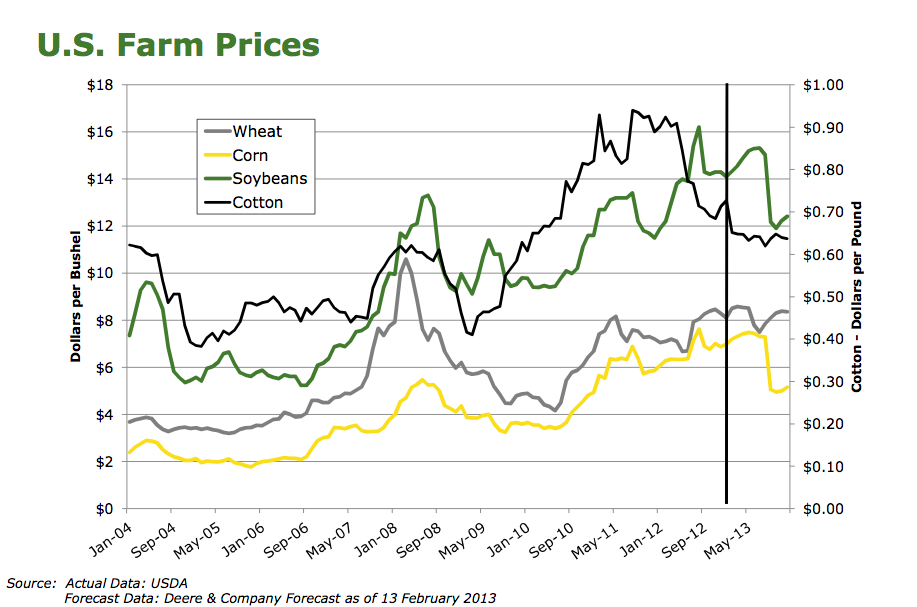 In a February 13 conference call with analysts, Susan Karlix, Deere's manager of investor communications said, "At this time of the year, it is hard to determine what that 2013-14 crop year will bring. Clearly the upcoming growing season has a lot of questions around it.

"Among other things, it should be noted that existing moisture conditions show the U.S. drought continues to be of significance. Research, however, shows that the moisture situation going into the growing season has virtually no impact on the final outcome. The primary point is that temperature and moisture levels experienced during the key growing season are the most important factors in determining yield. As is our custom at this time of year, our estimates for the 2013-2014 crop year assume normal weather and trend yields."

She says Deere predicts corn yields will rise 3% while soybean yields will be up 12% this year. Karlix added, "Current and prior year cash receipts are the primary driver of equipment purchases in the U.S. market. With cash receipts at record levels, this bodes well for future farm prospects."