Alamo’s North American Industrial Division net sales in the third quarter of 2012 were $62.0 million, an increase of 9%, compared to net sales of $57.0 million in the prior year’s third quarter. For the nine-month period, net sales in the Division were $196.8 million in 2012, versus $165.3 million in 2011, an increase of 19%. The 2012 results included the contributions of Tenco, as outlined above. Without Tenco, net sales in the third quarter of 2012 were flat compared to the previous year. These results reflect softer market conditions in this sector, which is primarily focused on governmental end users and related contractors. Sales to municipalities were noticeably weaker during the quarter.

Alamo Group’s European Division net sales in the third quarter of 2012 were $40.0 million, a decrease of 7% compared to net sales of $42.8 million in the third quarter of 2011. For the first nine months of 2012, net sales in the Division were $126.7 million, versus $130.8 million in the same period of the previous year, a decrease of 3%. These results reflect the continued uncertainty in the overall European economy.

Ron Robinson, Alamo Group’s President and Chief Executive Officer, commented, “Our results for the quarter reflected weakening global economic conditions. While our Industrial mowing and vacuum truck products held up reasonably well in North America, sales of big ticket items, such as excavators and street sweepers, were below expectations as governmental end users, particularly municipalities, showed signs of slowing. Similarly, the softness we began to see in our Agricultural division in the second quarter continued into the third quarter, especially in drought-affected areas. As expected, Europe remained our softest segment, as it continued to feel the effects of the financial turmoil and general economic uncertainty across that region. The lower sales for the quarter resulted in reduced overhead absorption rates, which, combined with softer than usual sales of higher margin aftermarket parts, affected profitability for the quarter.”

“While we remain cautious regarding economic conditions worldwide, we believe we have maintained or improved market share in most of our key markets, and generated solid overall performance in a tough operating environment. Additionally, we feel confident that our markets, despite being affected by broader economic concerns, will continue to hold up better than many industrial segments as a result of our focus on infrastructure maintenance equipment and agricultural implements, as has been shown to be the case in the past. In addition, our balance sheet continues to strengthen, giving us the ability to push ahead with operational improvement initiatives, continue our product development program and pursue complimentary acquisitions.”

Mr. Robinson concluded, “Despite short-term economic headwinds, we continue to feel positive about Alamo Group’s positioning and outlook. Going forward, we remain committed to executing on our strategy and believe our market leading presence will continue to perform well in an uneven economic environment." 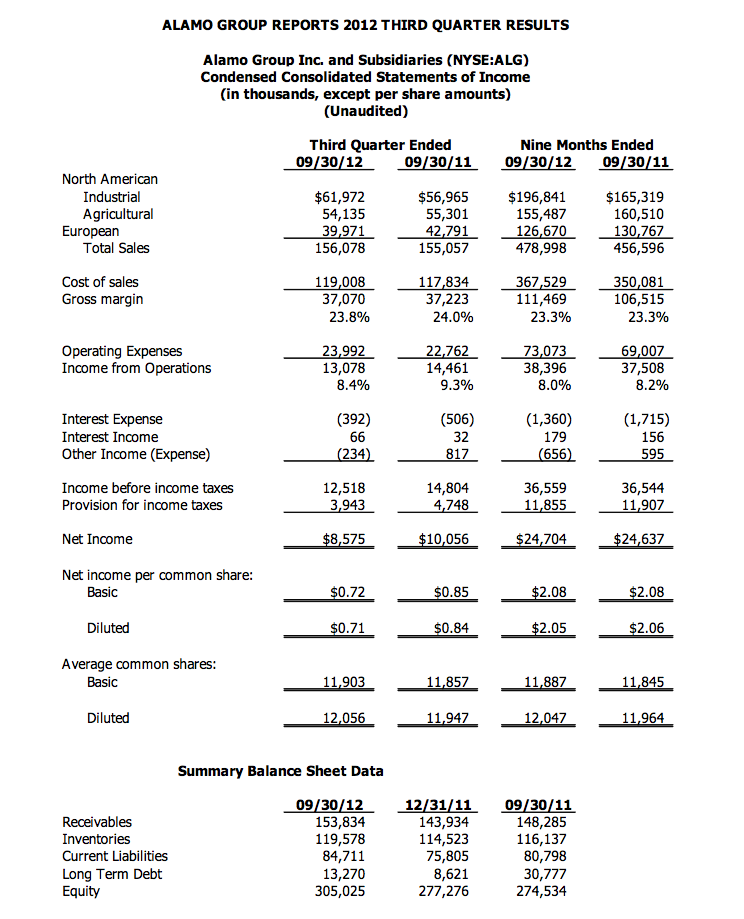