To The Point - We've Got Some Work To Do

By Dave Kanicki posted on September 22, 2010 | Posted in Manufacturer News 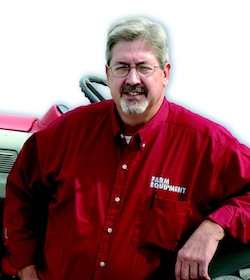 Every nation, every industry, every team, every business, every individual will only perform at their best when they have a stated goal, a clear objective and a purpose to work toward. We all need something that keeps us focused on why we do what we do.

So, if the essential goal of farming is to feed people, the business of agriculture has its work cut out for it.

It’s projected that world population is growing at a rate of 80 million people a year and by 2050 — in 4 very short decades — there will be some 9 billion mouths to feed on this globe.

It’s also generally accepted that the only way to nourish this burgeoning population is to do more with what we have; to squeeze every bushel of crop from every existing farm acre.

In 2008, Hugh Grant, chairman and CEO of Monsanto, laid down a powerful mandate to double worldwide per-acre yields of corn, soybeans and cotton by 2030. Thus, the self-imposed goal of 300 bushels of corn per acre has become the rallying cry for all of agriculture. And considering that U.S. growers today average about 165 bushels of corn per acre, it’s obvious that we’ve got some work to do.

This industry’s challenge is eerily reminiscent of another seemingly insurmountable task this country took to heart nearly 50 years ago.

“We choose to go to the moon. We choose to go to the moon in this decade and do the other things, not because they are easy, but because they are hard, because that goal will serve to organize and measure the best of our energies and skills, because that challenge is one that we are willing to accept, one we are unwilling to postpone, and one which we intend to win … and do all this, and do it right, and do it first before this decade is out.”

Like President John F. Kennedy’s call to action in September 1962 that ignited the space race, agriculture is being called upon to do much the same — to win a battle that some believe is unwinnable, to move farming to levels that most never believed were possible.

In our special report in this issue of Farm Equipment, “300-Bushel Corn: Answering the Equipment Challenge,” we explore what it’s going to take in terms of equipment and production technologies to answer this challenge.

What’s abundantly clear is that this is an ongoing, industry-wide crusade that demands participation and action from each and every element of agriculture — and that includes you, the farm equipment dealer.

Your role in doubling corn yields is outlined in this issue as well.

Make no mistake about it, the challenge is daunting. To double corn yields during the next 2 decades will require farmers to increase production by 7 bushels per acre per year for the next 20 years.

And, as has always been the case, equipment dealers will carry much of the load of transferring knowledge of the latest breakthroughs to those who will ultimately carry the day in achieving unprecedented levels of crop production — the farmer.

Goals, they say, are dreams with deadlines. Like the space race of the ‘60s, we’ve got some work to do.

And to paraphrase President Kennedy’s comments from 1962, agriculture will reap the harvest of these gains. And it will be done. And we’ll do it within the next 2 decades.

To the Point: What Signs Do You Look For?

To The Point: It's Easy to Forget