New Holland Rochester has 6 locations throughout Indiana and a 7th that sells solar panel systems. It’s safe to say there’s never a slow day at the office, with customers calling, texting, tweeting, facebook messaging and e-mailing for assistance. It’s a good problem to have and CEO Jesse Straeter has the perfect solution.

“We’re currently using a system called Gorgias,” Straeter says. “It’s a centralized ticket management system. Every time someone calls into the dealership, texts, or e-mails us, a ticket gets created.”

Gorgias organizes the tickets into a live dashboard. Employees can see who is assigned to the ticket and if a follow-up conversation is needed.

The system offers several customizable dashboard options. For example, one dashboard view shows which tickets are open and need to be worked on, with columns identifying whether the messages came from Facebook, Twitter, e-mail, text or phone. 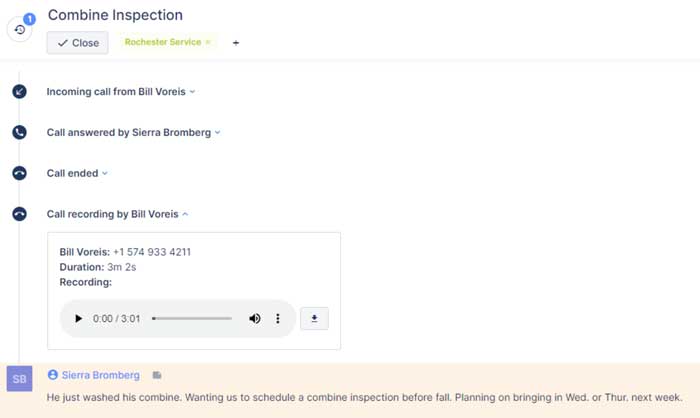 “There are all of these different ways that customers want to communicate with us,” Straeter says. “This platform really centralizes that into one system, so you can quickly see everything that’s going on.”

Always on the Clock

Gorgias comes in handy after hours and on holidays when the store is closed, Straeter says. He saw a message pop up on the dashboard from the company’s Facebook page over Memorial Day weekend and was able to address it on the spot.

“I responded and the customer told me he was interested in a tractor,” Straeter says. “With a couple clicks of a button I was able to reassign it to a salesperson. I don’t have to pick up the phone and call him (the salesperson) or send an e-mail. He can see exactly how the communication went and take it from there. It’s a real slick, simple way for the team to stay on the same page.

“Another nice feature is you can see when other team members are currently looking at a ticket. So, you don’t have to wonder if it’s just up on their computer screen as they’re getting coffee or something. You can see when they’re actively typing and responding to the message.”

New Holland Rochester employees can put the pen down during phone calls now because Gorgias essentially takes notes for them. The system has a call recording option that has proven to be the most popular feature within the dealership, Straeter says, saving and storing phone conversations for up to 6 months.

“It’s a real slick, simple way for the team to stay on the same page…”

“If you’re a service manager, that customer may be rattling off a thousand different things on the call,” he says. “You don’t have to worry about trying to write as fast as you can to keep up with him. You can just listen to what the customer is saying and respond accordingly. When the call is over you can go back and play it as many times as you want.”

The snooze option is another well-liked feature, allowing users to temporarily put a ticket on the back burner until they can address it later. A reminder alarm can be set to prevent “snoozed” items from slipping through the cracks.

Every ticket also has a message box that is “very versatile,” Straeter says, allowing users to type in self-reminders or messages to other teammates.

“There’s a little menu icon you can select that lets you to perform different actions from the same message box, with only a couple clicks,” he says. “You can send the customer an e-mail or text message or you can forward it to someone else.”

Ticket history is one of Straeter’s favorite features in the Gorgias system. It provides a quick snapshot of all previous interactions with a customer. Multiple tickets can be merged to speed up the process.

“Let’s say you have two tickets that are really about the same thing,” Straeter says. “With a couple clicks you can merge all that interaction together in chronological order. It’s organized together and, therefore, not going to get lost in the shuffle.”

Gorgias also organizes all customer service activity into a statistical report, producing valuable data that can be used for performance analysis.

“You can look at how many tickets are coming into different stores or teams,” Straeter says. “Maybe you want to know how many phone calls come into one store vs. another last month? How many tickets did this service manager handle vs. another? And so on and so forth.

“Overall, the Gorgias system is a great way for teams to stay on the same page and sync with customers as they start to communicate with us on more of these different platforms.”