Just over 25% of this year’s surveyed dealers forecast their new wholegoods revenue down at least 8% next year.

Some optimism remains on the strength of farmers’ finances and demand for equipment. However, inflation, continuing supply chain chokeholds, fear of recession and the Fed’s interest rate hikes appear to have weighed more heavily on dealers’ minds when taking this year’s survey.

New wholegoods revenue projections were the most negative in this year’s study, likely the result of continuous equipment shortages. Nearly half of all surveyed dealers (48%) are forecasting some degree of new wholegoods revenue decline in 2023 vs. 20.7% who said the same last year. The percentage forecasting a decline of 8% or greater more than quadrupled from 5.4% last year to 25.3% this year. 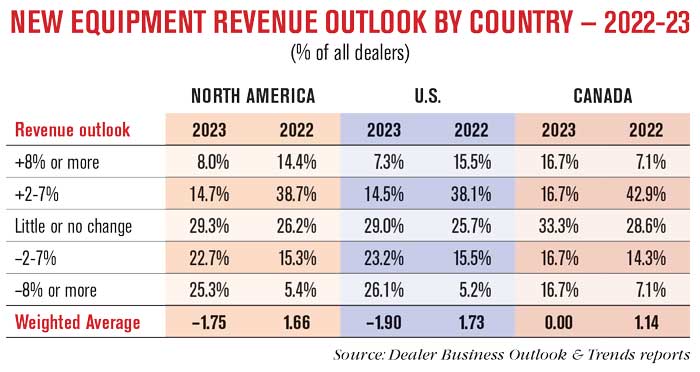 Canadian dealers were more optimistic than their U.S. counterparts, with 33.4% forecasting some degree of new wholegoods revenue increase vs. 50% saying the same last year. One third of Canadian dealers this year, however, forecast revenue to be flat year-over-year, above the 28.6% from last year. 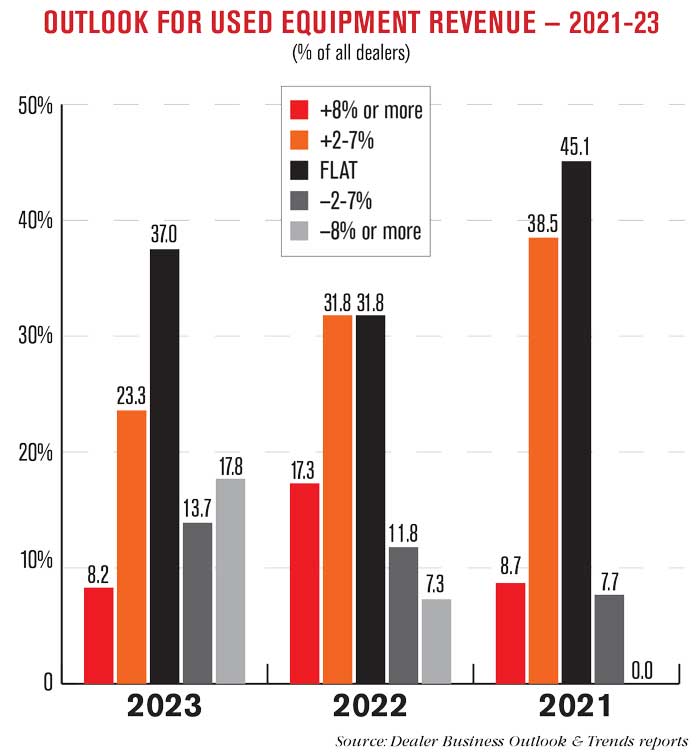 Outlook on used equipment revenue growth was down as well, though less severely than with new wholegoods. Almost 32% of dealers are forecasting an increase, down from 49.1% last year. Slightly more dealers held a neutral view on used revenue at 37%, up from 31.8% last year but below the 45.1% who thought the same about 2021 used equipment sales.

The largest percentage of dealers in the last 3 years forecast their used equipment revenue down 2% or more — 31.5%, up from 19.1% last year. 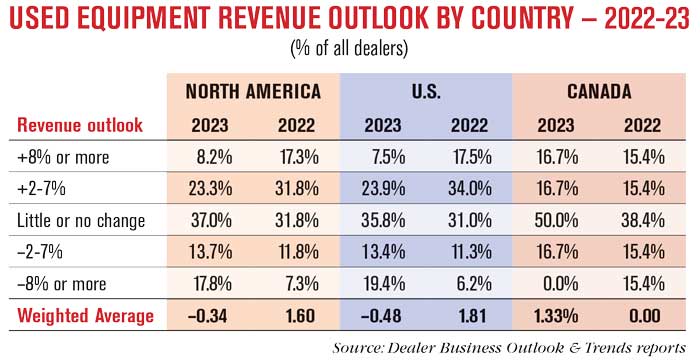 Canadian dealers were also more optimistic than their U.S. counterparts when it came to used equipment revenue outlook, with 33.4% forecasting some degree of growth, though 50% still gave flat forecasts. This is an improvement from last year’s score, which saw Canadian dealers’ responses spread evenly across all options save for “flat,” where 38.4% of Canadian dealers identified themselves.

According to Ag Equipment Intelligence’s latest Dealer Sentiments Report, dealer optimism remains in negative territory, with net 44% of dealers saying they are less optimistic than last month, though their sales outlook remains positive. This was the second month in a row of increase since the 12-month record low of –61% recorded in May 2022. The last time dealer sentiment was in the positive range was April 2021, with a reading of +24%.

Commentary from the August Dealer Sentiments Report shows dealers are feeling the pinch, both in terms of equipment supply and price.

“We have lost all used programs and most new discounts in addition to increased freight costs on new equipment,” said one Canadian dealer. “Customers are refusing to buy equipment as prices rise and price protection is not guaranteed,” said one Lake States dealer.

Some dealers, however, left commentary hinting at possible relief on the supply front. “Bobcat orders just flooded in, including orders as far back as June 2020. They said to expect much more by year end, which is causing a jump in our inventory,” said one Appalachia dealer. “Equipment shipments from manufacturers picked up this month,” said another Appalachia dealer. 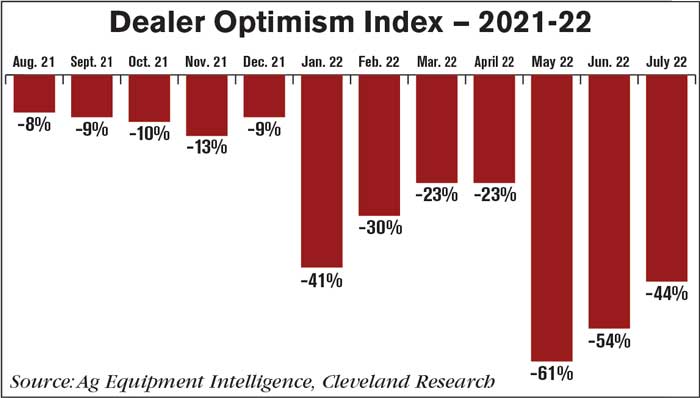 Parts revenue forecasts were up year-over-year, an impressive feat given last year’s forecasts were already remarkably positive. A little over 75% of dealers are forecasting at least a 2% increase in their parts revenue for next year, reflecting a growing need for aftermarket in an industry where new equipment is hard to come by and used equipment is being held longer as a result. This was slightly above the 71.8% who said the same last year. Some 26% of dealers are forecasting an increase of 8% or more.

Just 5.5% of dealers forecast a decline in parts revenue, though this was still a slight increase from the 1.8% who forecast the same last year.

All surveyed Canadian dealers this year forecast a parts revenue increase for 2023, with the majority (83.3%) forecasting an increase of 2-7%. This was a positive shift from last year, when 38.5% forecast an increase of 2-7% and the remaining 61.5% held a flat year-over-year outlook.

Almost three-fourths of surveyed dealers (74.3%) are forecasting a service revenue increase for 2023, up from 70.9% who said the same last year. In this increase, the percentage forecasting an increase of 8% or more rose from 17.3% to 21.6%.

A little under 6% of dealers forecast a decline in service revenue for next year, a jump from the 0.9% who said the same last year.

Just over 24% of dealers expect a price increase of 10% or more from their OEM next year, well above the 13.9% who said the same last year. More dealers this year were also forecasting a smaller increase of 1-3% (17.6%) than did so last year (12%). Otherwise, the 4-6% and 7-9% increase categories saw declines in the percentage of dealers selecting them. Forecasted price increases remain well above levels seen for 2021, when no dealers forecast either 7-9% or 10%+ increases from their OEMs. 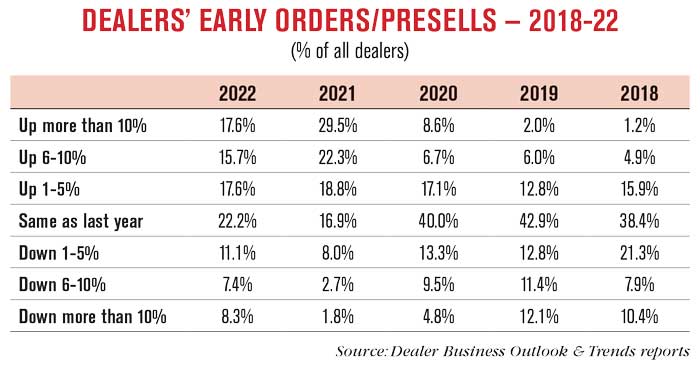 This year, dealers were more diversified in their early order reporting, with the highest percentage being tied between up 10%+ and up 1-5%, both at 17.6%. The percentage of dealers estimating their presells down this year more than doubled year-over-year, from 12.5% in 2021 to 26.8%.

Tractor and combine unit sales outlooks for 2023 were down across the board in every category in both the U.S. and Canada. The most dramatic overall decrease for North America was in combines, where the percentage of dealers forecasting a 2% or more increase fell from 51.1% last year to 20% this year. Over 100 horsepower tractors showed the smallest decline, with the percentage of dealers betting on sales growth falling from 47.1% last year to 37.2% this year, making 100+ horsepower tractors the strongest category this year. Tractors with 40-100 horsepower, last year’s top pick among dealers, fell from 55% forecasting increases to 28.9%.

Windrowers and swathers were dealers’ top overall pick for unit sales growth in 2023, with 94.1% of dealers forecasting their sales to improve or remain the same as this year’s. This wasn’t much of a shift for this category, which came in third last year.

Two notable changes in ranking were pull-type sprayers as the second-best bet for improved unit sales (92.3% forecasting the same or better sales) and precision farming systems in third (91.9%), both of which ranked in the teens last year. Last year’s top pick for improving unit sales (feeders/mixers) came in fourth this year with 91.5% forecasting the same or better sales. Forage harvesters finished the top 5 picks, the same as last year.

Other notable shifts were field cultivators dropping to #12 from #4 last year, disc harrows falling to #17 from #9 last year and 40-100 horsepower tractors falling to #18 after being #6 last year. In fact, this year saw all 4 tractor categories in the bottom 6 categories. 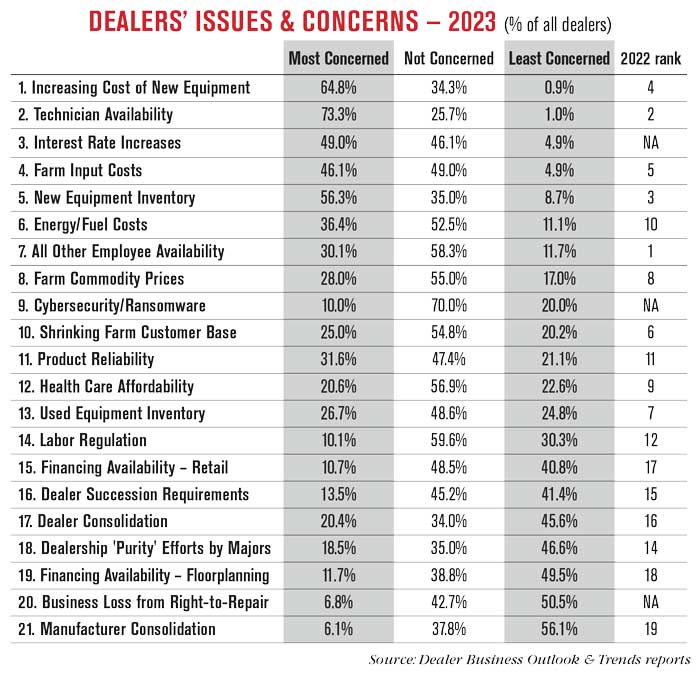 The increasing cost of new equipment topped dealers’ list of concerns this year, up from being dealers’ fourth biggest concern last year (topics were ranked by percentage of dealers that were least concerned). Technician availability remained the #2 biggest concern, with 73.3% of dealers saying they were most concerned about it. A new category for this year, interest rate increases, was ranked the third most important issue. Farm input costs came in at #4 (vs. #5 last year) and new equipment inventory came in #5 (#3 last year) to finish the top 5 concerns.

Notably, employee availability not including technicians was #7 this year, down from being the #1 issue in the 2021 report. Other notable shifts were used equipment inventory dropping to #13 from #7 last year, and business loss from right-to-repair, a new topic this year, coming in at #20, the second-lowest ranking. The third new category introduced this year, cybersecurity, was the #9 issue.

The least popular department to plan to add staff in was once again corporate/administration, where 17.7% of dealers are planning to add, down from 18.3% last year. Parts department staff was the position dealers were most likely to reduce at 2.9%.

The percentage of dealers planning no change for hiring in a position was up for all categories. The most notable increase was from 56.1% last year to 70.2% this year in wholegoods sales.

Dealers Pull Back on Investments 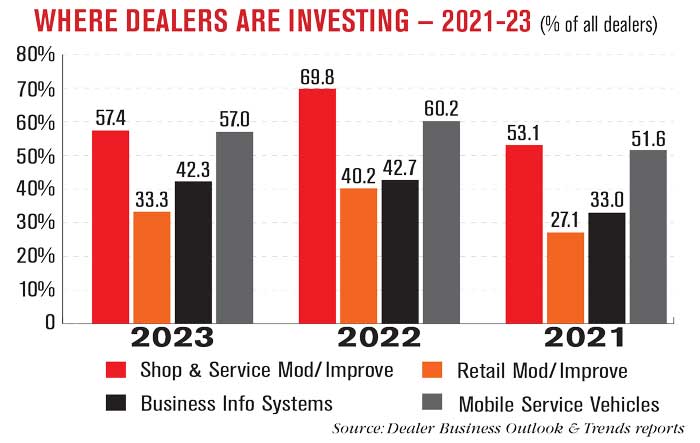 After increasing in all categories in last year’s study, the percentage of dealers investing dropped in all 4 investment categories this year.

The most popular investment category was shop/service improvement (57.4% of dealers said they’re investing here next year), down from 69.8% last year. Mobile service vehicles followed at 57% vs. 60.2% last year. Retail space/showroom investment was the least popular category for the third year in a row, with 33.3% of dealers planning to invest in the coming year. 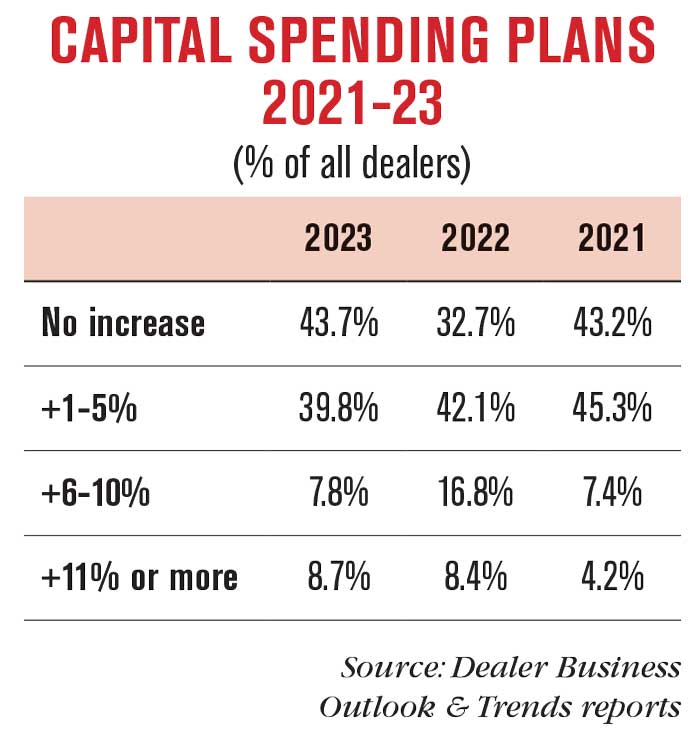 Dealers’ estimates on their 2022 new wholegoods revenue was more mixed than last year’s forecasts, which leaned toward growth. This year’s report saw almost a quarter of surveyed dealers estimate their new equipment revenue up 8% or more in 2022, beating last year’s forecast of 14.4%. The percentage estimating a growth of 2-7%, however, was well below the 38.7% who forecast the same last year. Almost 32% of dealers reported a decline in 2022 new equipment revenue of 2% or more, above the 20.7% who forecast the same last year. The percentage of dealers estimating a new revenue decline of 8% or more nearly tripled from 5.4% to 13.1%. 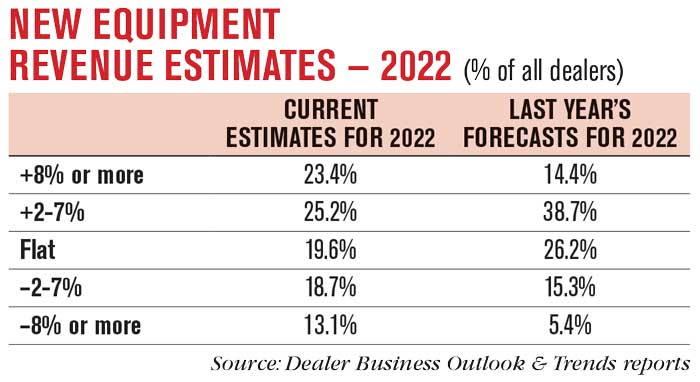 The used equipment situation, however, fared better than new wholegoods estimates did. Over half of surveyed dealers (56.5%) estimated their used equipment revenue up in 2022, and 24.8% estimated growth of 8% or more. 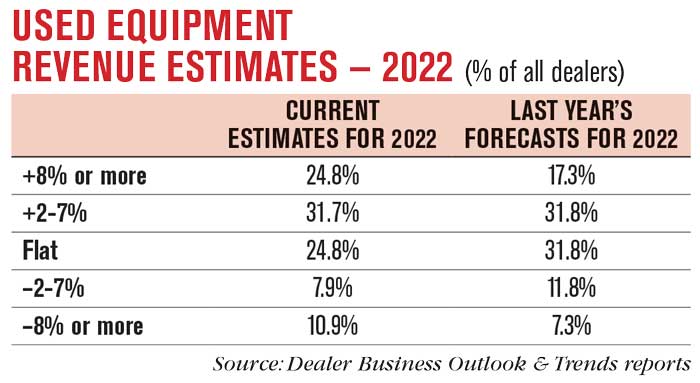 Parts gross margin showed the most improvement, with 65% estimating an improvement vs. 55% last year. Service was up only slightly, from 64% last year to 68% this year.