In this episode of On the Record, we take a closer look on AGCO’s unfinished inventory, which is the highest it’s been in 2 years. In the technology corner, we take a look at Precision Planting's new tools for automating soil sampling. Also in this episode, the results of a Farm Equipment poll on OEM new equipment lead times and an update on the UAW-CNH strike.

In the earnings call for AGCO’s second quarter 2022, the company reported $625.6 million dollars in work in process equipment inventory, its highest in the last 2 years. 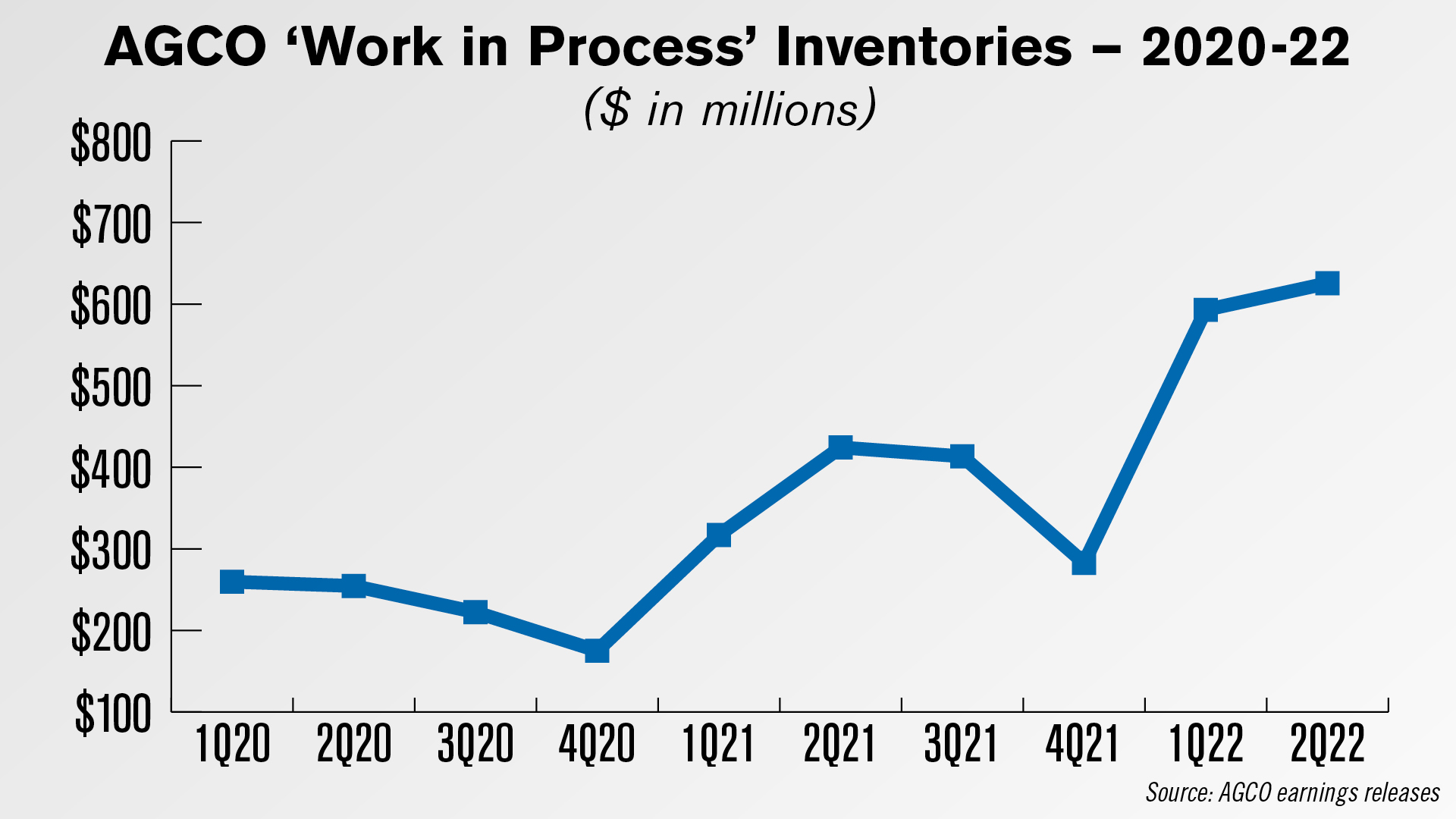 AGCO’s second quarter WIP orders were up 5.5% from its previous quarter and up 47% from the $424 million it reported in its second quarter last year. Over the last 10 financial quarters, AGCO’s lowest reported WIP inventory was $175 million in the fourth quarter of 2020.

AGCO CEO Eric Hansotia attributes the increase to both supply chain bottlenecks and the cyber-attack the company faced in May. The attack temporarily downed AGCO production facilities in several countries and made some parts systems for AGCO dealers unavailable. Overall, AGCO’s production hours fell 8% year-over-year in its second quarter after rising 6% in the first quarter of this year.

AGCO projects to increase production hours 5-7% for the full year 2022, which Hansotia said will help recover the lost production.

“Our current July production rates are solidly on track to deliver the higher production plan in the months ahead. The supply chain issues have impacted our ability to complete and ship units as well as contributed to labor inefficiencies … The combination of increased production in the second half of the current year and the current volume of semi-finished products gives us strong confidence in our full year sales outlook,” he said.

Hansotia pointed out the company had successfully brought down its WIP inventory levels by the end of last year and expected to do it again this year, though he added it wouldn’t all be “pushed through in the third quarter” and would take the entire year.

Precision Planting’s latest invention is a suite of tools for automating soil sampling and testing.

This week the company announced the new tools for agronomists under the name Radicle Agronomics.

The soil samples come from GeoPress, this device that mounts on utility vehicles to automatically blend and store soil samples in geo-tracked containers. The full containers go in Radicle Lab for analysis and eliminate the need for hand-labeling.

The final piece of Radicle Agronomics is a cloud-based software package to connect all steps of the field-to-lab process. A Precision Planting product manager says agronomists will start to get results within minutes of starting the Radicle Lab unit.

The units are in the final stages of testing this fall with the first production release set for late spring and early summer of 2023. Precision Planting is offering Radicle Agronomics as an annual lease arrangement that includes the three components, training on the system and any necessary servicing.

“Radicle Agronomics hinges on the output of these products being in the hands of those that growers trust for fertility recommendations, and that isn't our dealer network. A limited number of our dealers actually have robust agronomic services. We have had some communications and webinars with our dealer network so they know what this initiative is at a high level, what the products are that are involved with it, how we're planning to take it to market, why we don't think that they are the natural channel to take this to market. The feedback we've gotten this far is that the vast majority of them understand that. For some, it probably came as a surprise, but again, the thought that's gone into it, the way that this can really serve the grower, the vast majority of them understand that and applaud it.”

An August 2 Farm Equipment survey asked dealers what their major line OEMs were providing as lead times for new equipment orders.  Just over 45% of respondents said their OEM’s current lead time is 10-12 months. 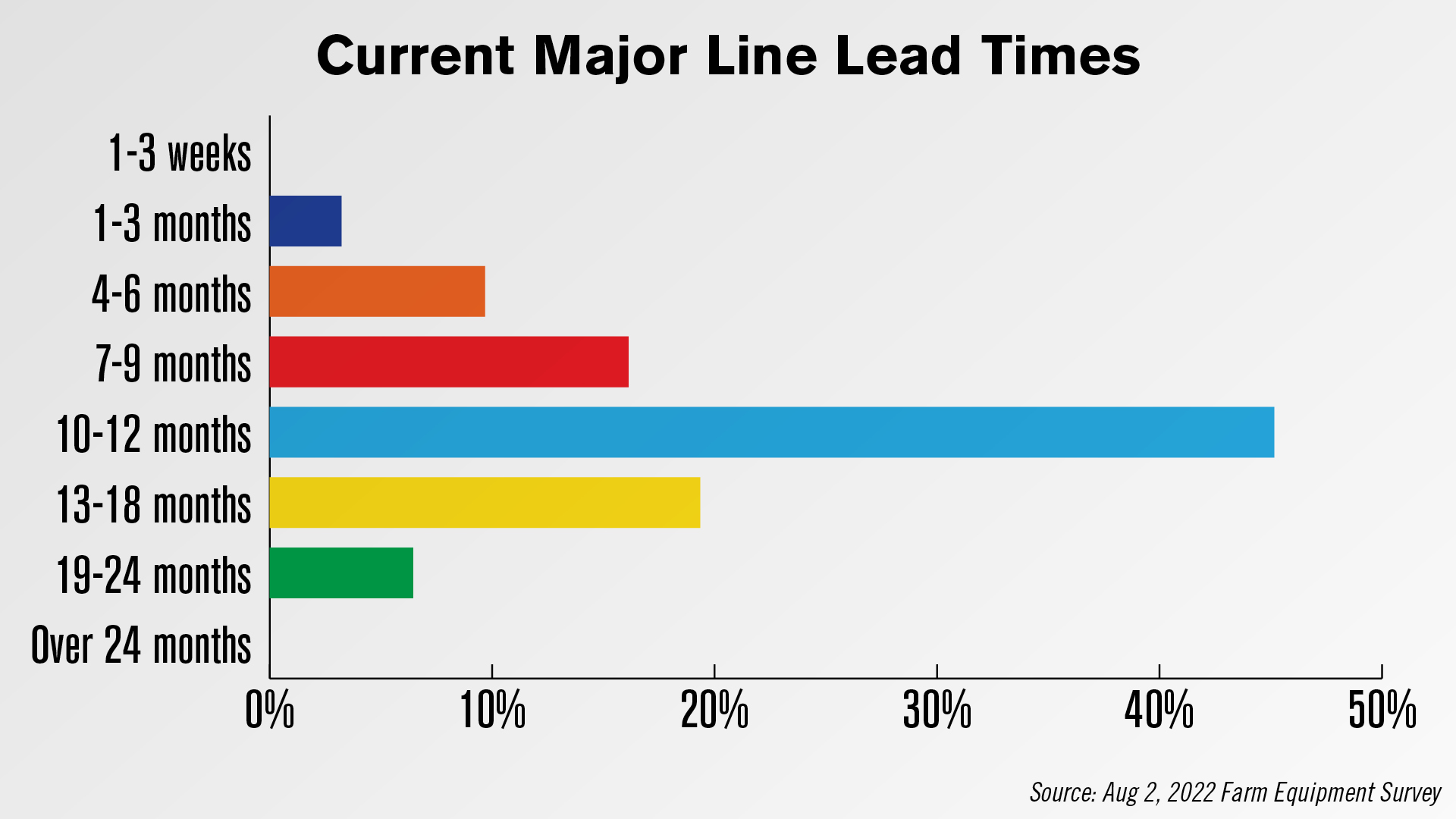 Another nearly 19% are hearing 13-18 months lead time from their major line OEM.

For shortline manufactures dealers responses were a bit mixed, with almost 45% saying shortline lead times were about the same as the majors. 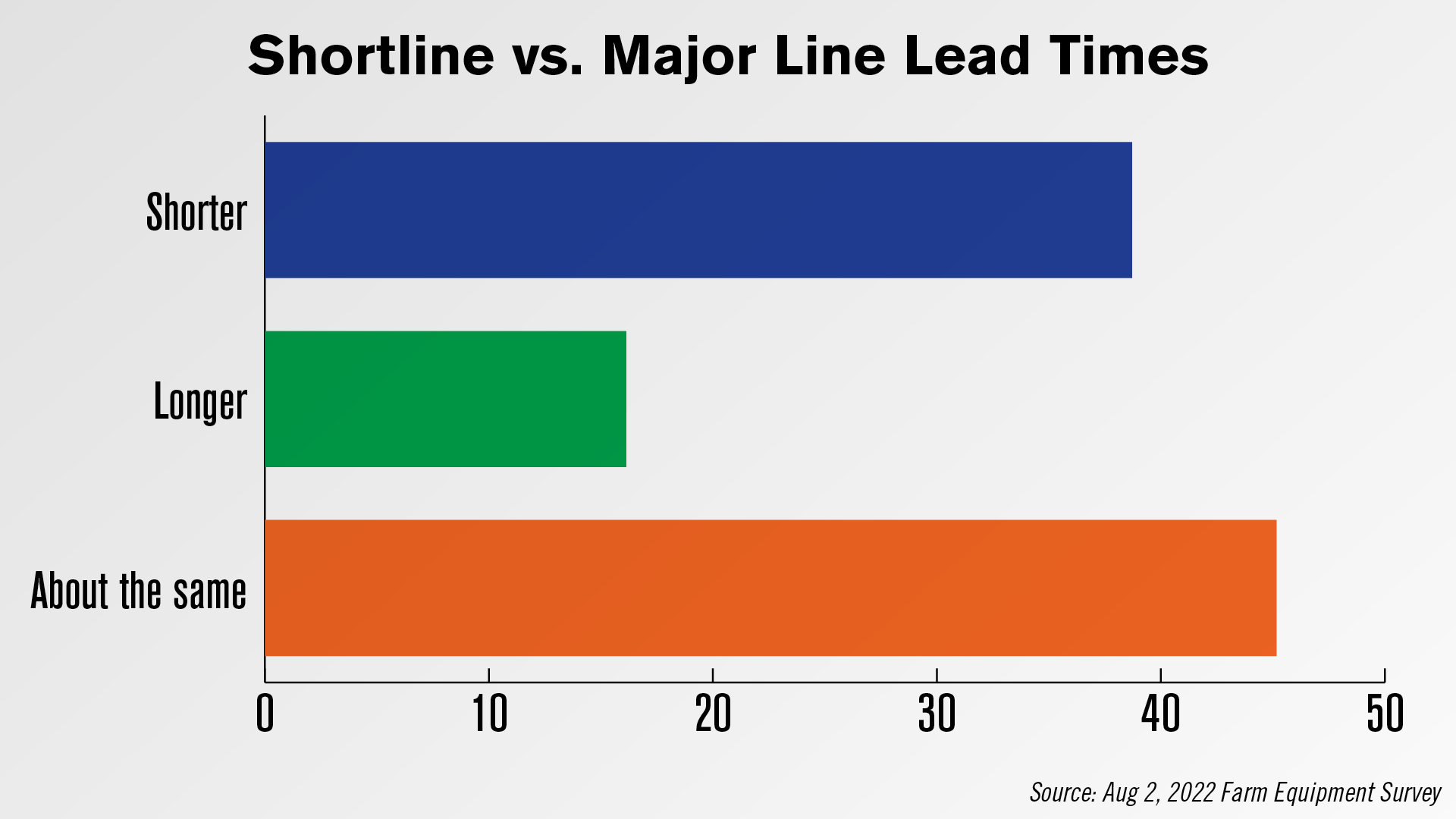 One dealer said their OEM was going to an allocation system adding, “We will see if it shortens lead times like they say it will.” Another dealer pointed out that lead times from the majors vary greatly depending on which factory the products are coming from.

Over 60% of CNH Dealers’ Bottom Line Hit by UAW Strike

According to the results of an Aug. 3 survey from Farm Equipment, 61% of surveyed CNH Industrial dealers reported some impact to their new wholegoods sales as a result of the ongoing UAW strike. The strike began in May, when 1,200 UAW workers at CNHI’s Burlington, Iowa, and Racine, Wis., factories walked off the job as their contract expired. Negotiations are set to restart in mid-August. 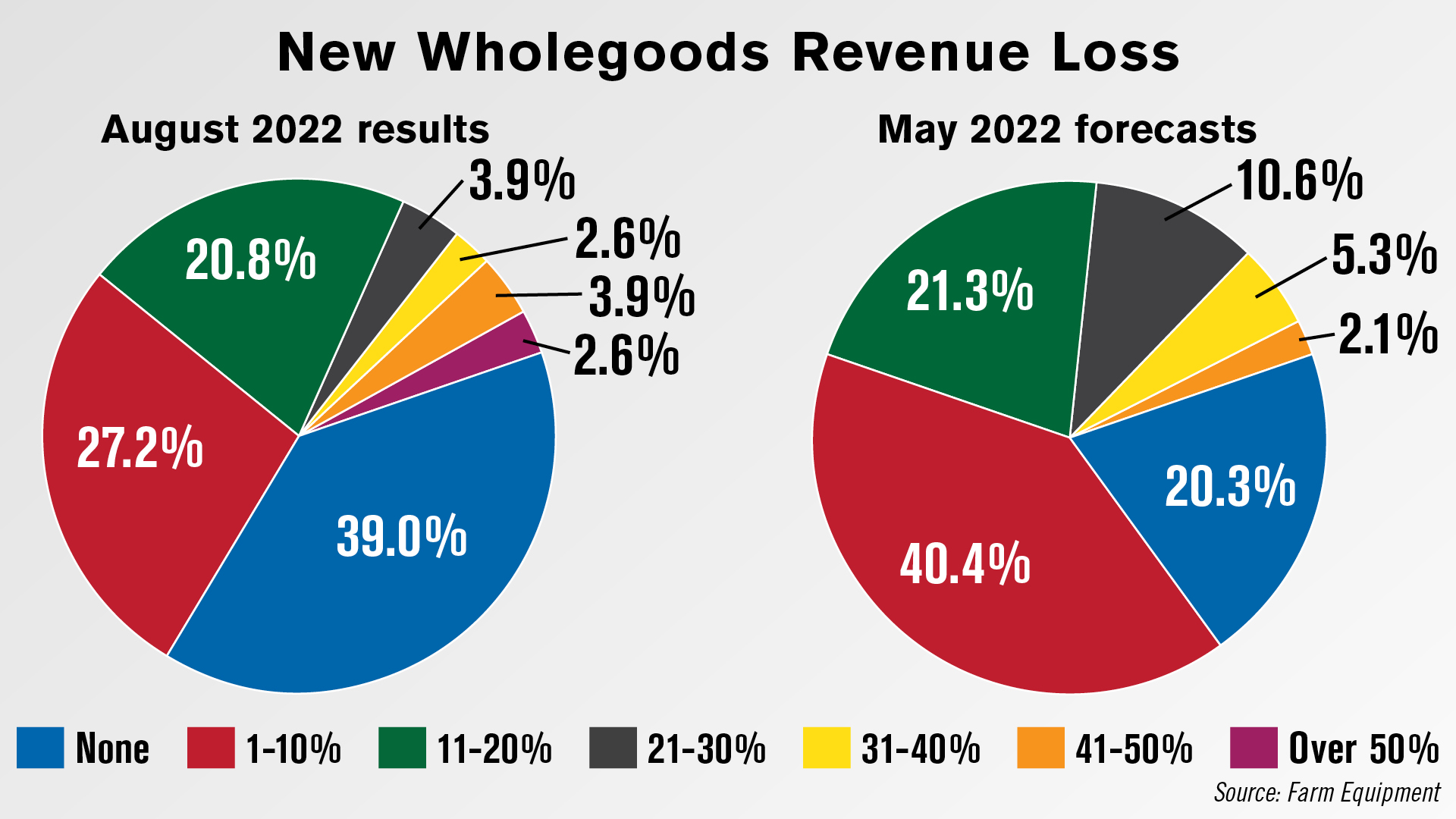 Some 39% of CNH dealers said there’d been no impact on their new wholegoods sales from the strike, almost double the 20% who predicted no impact in a May survey from Farm Equipment. 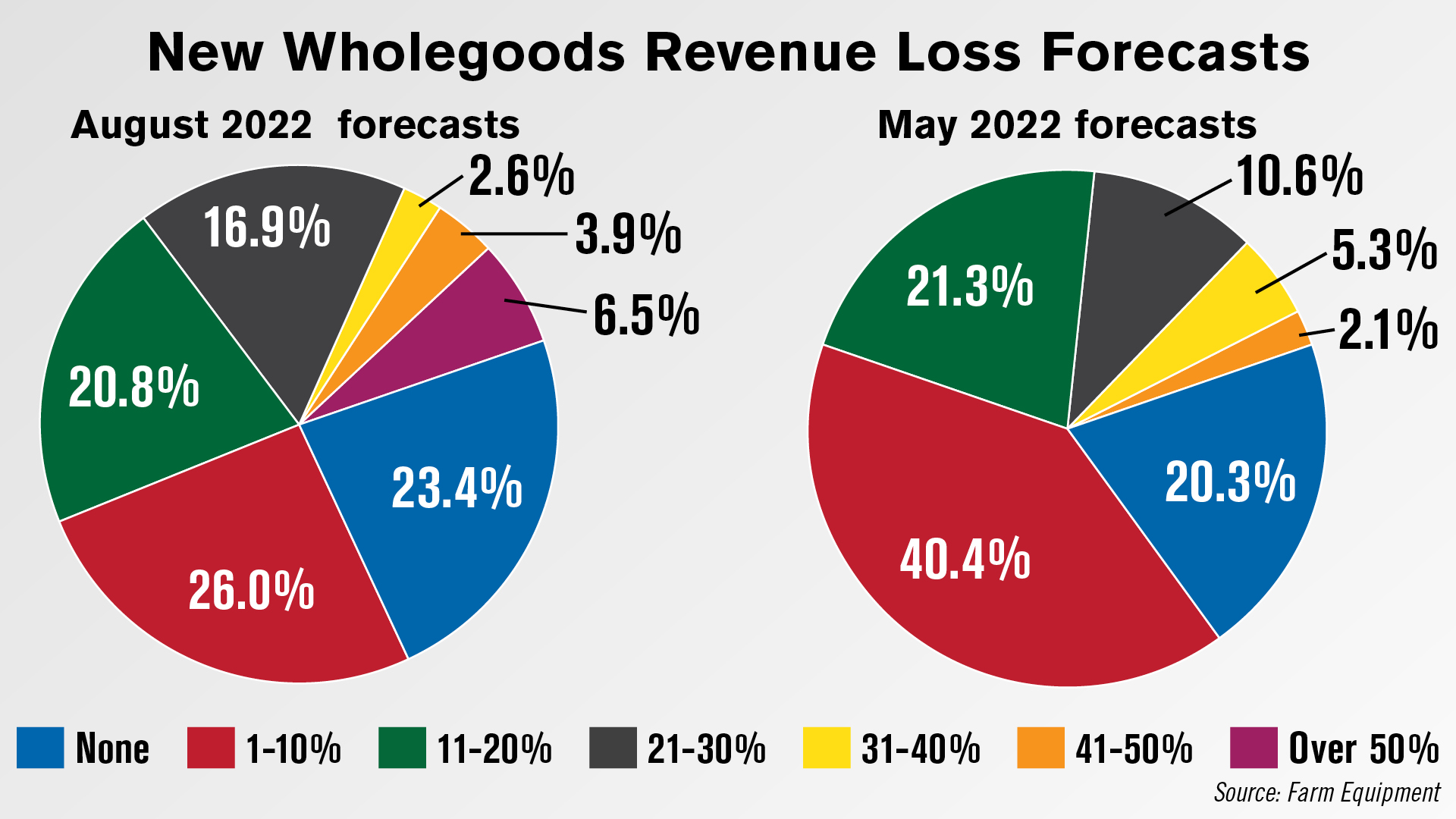 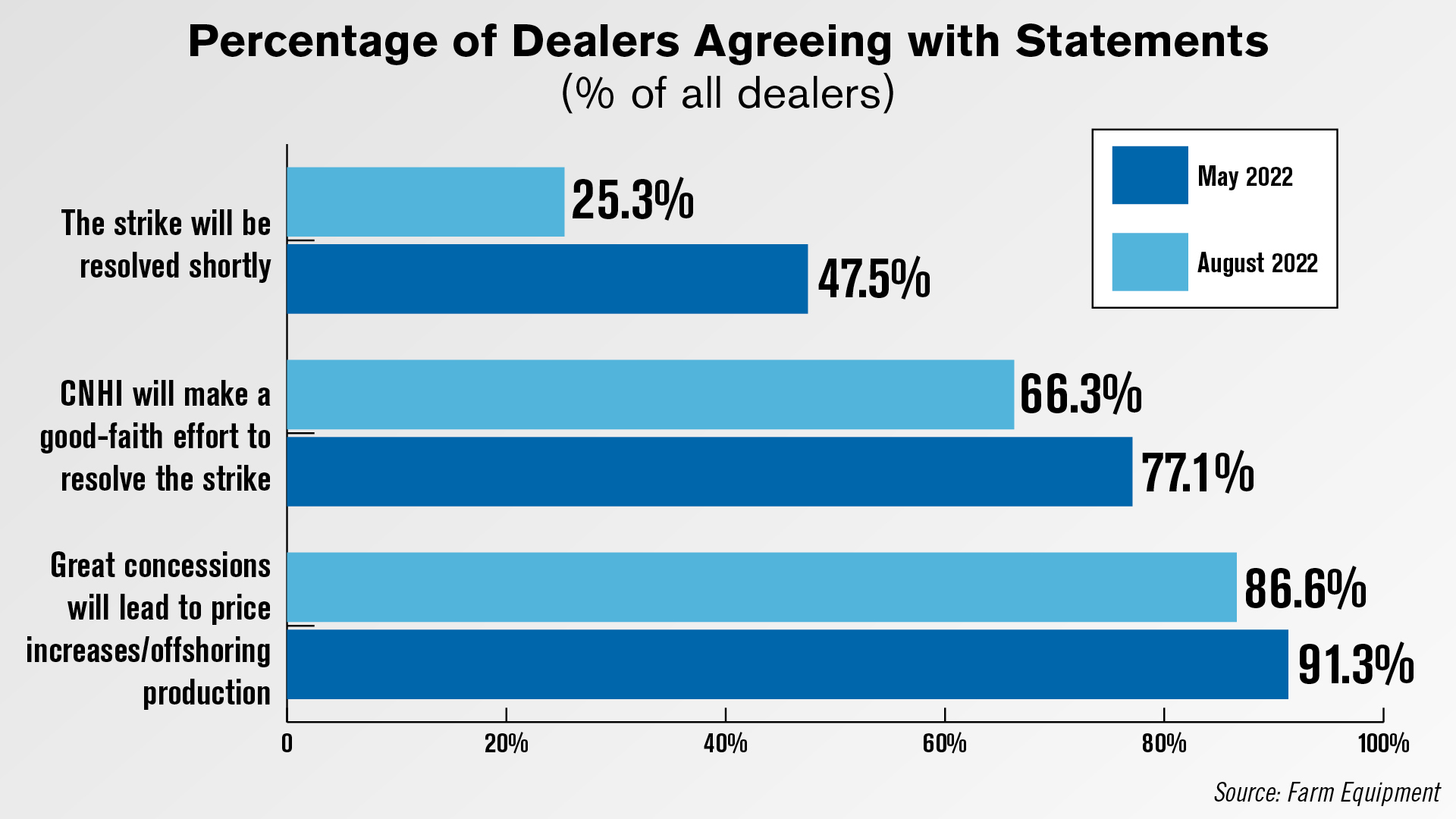 In Farm Equipment’s May survey, 48% of dealers of all colors said they expected the strike to be resolved shortly. When asked the same question in this month’s survey, just 25% believed the strike would be over soon.

The percentage of dealers agreeing CNH Industrial will make a good-faith effort in resolving the strike also dropped from 77% to 66%. Additionally, those believing concessions made in negotiations would lead to price increases and offshoring dropped slightly from 91% to 87%.