Third-generation farmer Trey Hill looks to a future in which he’s equipped with tools that will help him improve his data analysis in order to increase yield and maintain soil health.

Trey Hill isn’t sure what the future of farming has in store, but he is positive about one thing.

“I’m a firm believer in utilizing technology, and I think that’s going to play a big role in how I manage my farm,” he says. Hill manages a 10,000-acre corn, soybean and wheat operation in Rock Hall, Md., where he’s been working on his family’s land for decades.

While he doesn’t consider himself an early adopter of technological advancements, Hill does believe new developments in ag tech will influence the ways in which farming changes over the course of the next 10 years.

Those correlations, according to Hill, will help him learn more about his farm and set more achievable — and financially profitable — goals for each year.

“We’re planning to get a scouting drone to get some high-resolution photos, and I’m hoping they can teach me a lot more,” he says. “As a farmer, I have a lot of emotional ties to the land. In some ways that’s really good, but it can also cloud my judgment pretty easily. We’ll go through and do yield goals, and when I look at a farm I like I’ll think, ‘I can grow 210 bushels on it.’ But when we look at the data, it shows I haven’t grown that in 10 years.

“So having that recheck of the data can be quite valuable.”

By bringing in new tools to help analyze his data, Hill believes he can modify his goals to more accurately reflect previous outcomes.

“Maybe the prior year’s highest yield didn’t make me the most money,” he says. “Maybe it did. But I’m looking for tools that use my numbers rather than using university numbers or another farmer’s numbers. That’s essential, because everybody buys differently and everyone uses differently. There are so many different variables.”

Hill is also hoping for technological advancements that will help him and other farmers better understand the makeup of their soil.

“We ran some soil DNA tests in 2020, and it was mind-opening,” Hill says. “Within the DNA samples that I got back there were 225 funguses and 425 bacteria in each small sample of soil, and that’s just the ones that are known. That told me we really don’t know much about the soil.”

That lack of understanding is a problem for Hill, and it’s one he’s hoping will be rectified in the future through the implementation of different technologies.

“To truly understand the soil, we need to know what those fungi and bacteria are,” he says. “We need to know what the proper balance is in each to ensure that we’re getting a balanced soil. From there, the injection of technology in the form of chemistry and GMOs is where we can learn.

“For example, what does a fungicide do to those 225 different fungi? Does it put them out of balance, or does it put them in balance? Does a full layer application of fungicide affect them more than an in-furrow treatment of fungicide? Which is better for soil health and which one gets me higher yields?

“I don’t think anyone knows, and it’s going to drive the next development.”

Hill believes it’s necessary for farmers to improve the ways they analyze their soil in order to better interact with it and make appropriate decisions about how to proceed going forward.

“It’s difficult to fix something if you don’t know what’s broken,” he says. “Many things we do are fixing short-term problems, but we may need to develop some new strategies.”

Hill notes that the soil changed considerably with his move to no-till with cover crops. By better understanding the soil, he believes his management of inputs will improve, particularly in regard to fertilizer.

“It would be nice to be able to predict possible imbalances in the soil that may adversely affect the yields, and also see which products have the potential to cause those imbalances,” he says. “It will also allow us to make better decisions in evaluating the many biological products that are coming on the market. Do we need a completely different biological that hasn’t been tested or seen because it doesn’t appear to be that prevalent, but maybe it’s one of the major foundations?

“That’s where farmers need to go. We need to figure some of that stuff out.”

Make Sure the Technology Works

It’s clear to Hill that the future of farming will continue to be largely influenced by the ways in which equipment becomes more technologically advanced, and the impact those advancements have on manufacturing decisions. He embraces that ongoing progress — with one caveat.

“With precision technology, the most important thing is whether or not it works,” Hill says. “Does it flow with the way that work is supposed to flow? It’s very effective stuff, unless you’re stopped. Planting timing is critical, and any time spent sitting is unacceptable. That’s the biggest litmus test of its success.”

Right now, according to Hill, the bulk of the problems he runs into with his equipment have to do with the technological side of things, rather than mechanical aspects. To circumvent those issues, Hill looks for tech that can be unhooked from the machine so the equipment can run manually, but that’s not always possible. 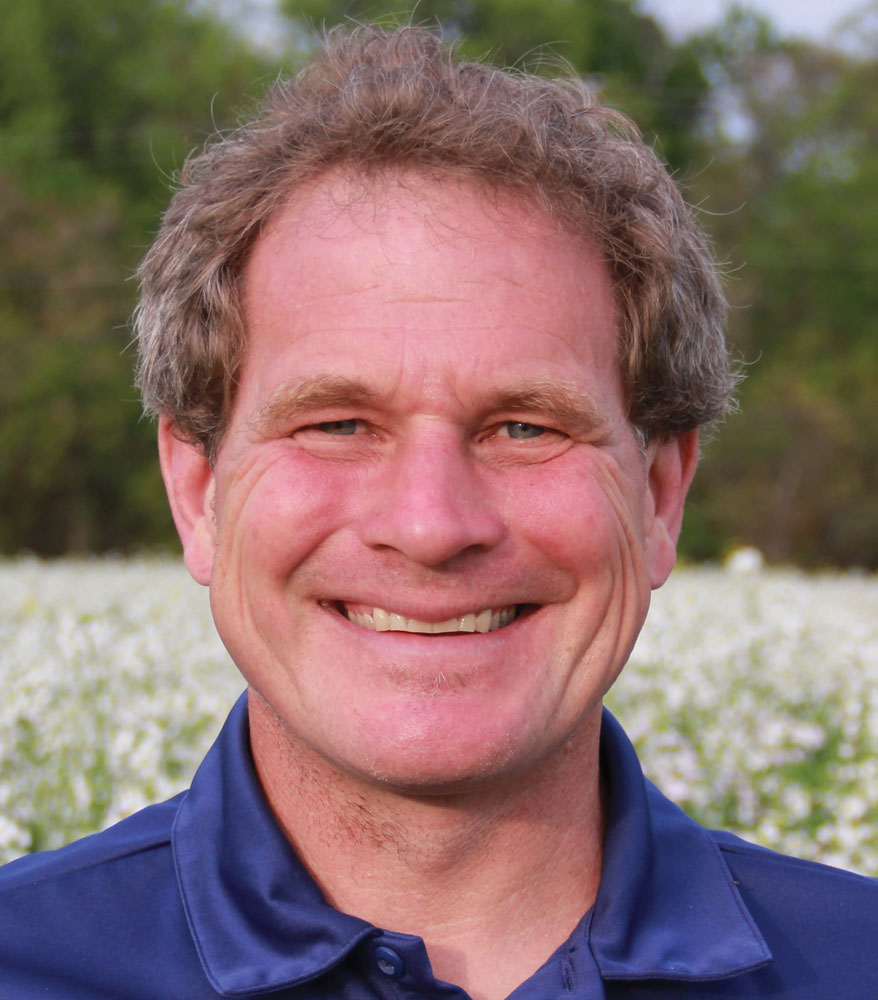 “With the value of the equipment and the price and the technology on it, you have to have a smart guy running it…” – Trey Hill

“We recently had a wire chaff on our variable rate spreader and it took 2 days to get the replacement harness,” he says. “Because the plug had melted we had no choice but to stop, and the spreader would not spread without the scale and monitor working.”

Although it’s rare, Hill says technological issues do occasionally result in lower yields, particularly if he doesn’t catch the malfunctioning equipment right away.

“I feel like it has smoothed out a little, but we sometimes don’t adopt the latest and greatest for fear that it might slow us down. When it comes to no-till and planting green, the window to plant can be quite short. We don’t run the ground speed very high when we plant, so it needs to be constant.”

“With the value of the equipment and the price and the technology on it, you have to have a smart guy running it,” Hill says. Recruiting workers who are equally comfortable utilizing farm equipment and the latest advancements in ag tech — and who understand the ways in which those two components interact — is key to the success of his farm, according to Hill.

“Say my daughter wants to plant,” Hill says. “She’s 17, and she’s going to understand technology, but she’s not going to understand the planter. If you’re not well-versed in how these planters work, they’re pretty difficult machines to run. I don’t think a lot of it is super intuitive.”

That can be problematic, Hill says, when circumstances sometimes require one worker to utilize another worker’s machine.

“If somebody’s got to go to their kid’s baseball practice, how do you just jump on their combine?” he says. “That’s the kind of stuff that worries me. To be able to overcome those weaknesses is the big thing for me. A lot of that’s probably available now to a certain extent, but I think we need more parameters and more details.”

One step Hill has taken — and will continue to take — to ensure that his employees are able to capably operate farming machinery equipped with modern technology has to do with what he pays workers on his farm.

“You have to make well above minimum wage to live,” he says. “We provide stuff like health insurance and 401(k) to try to recruit good people.”

“The cost of labor will continue to go up,” he says. “We just have to figure out how to utilize those employees.”

Hill has 12 employees on his farm. He believes that by offering them substantial salary packages, he is able to recruit and retain workers who possess an equal understanding of technology and planting equipment, and who can make connections between the two. So far, he says, it’s paid off.

“I’m very fortunate to have the team I have,” Hill says. “Having a dedicated person who is willing to work long hours is difficult to find, and I struggle to find part-time folks who are competent enough to run equipment effectively.”

Part of Hill’s decision-making with the switch to no-till was an effort to limit the number of employees needed during peak times. Because of his limited number of staff, he can justify the higher costs he pays for labor.

“Our labor costs may be on the high side per acre, but my quality of work standards — and my quality of life with fewer headaches — definitely outweighs that,” he says.

According to Hill, hiring highly capable employees will continue to be crucial as technology further changes in the next decade.

“We’re doing a lot more training, and we’re going to have to incorporate more training and education as the dealerships and retailers are streamlining. As they cut costs and cut their margins for us, that means less support. So doing more things in-house is essential.

“That’s going to be the case even more moving forward. We’re going to need guys that are up on the newest technology and have the know-how to work the technology, so we can do the diagnosis on our own.”

One thing Hill is confident will stay the same in the years ahead is his approach to cover crop management.

“I’m not backing off of planting green,” he says. “That’s definitely the way I’m always going to farm. I don’t see myself reverting back. I see myself learning lessons along the way.”

Hill believes planting green will continue to become more of a mainstream approach to farming as time moves on, and with that increased popularity there will be a shift in equipment production.

“As more people start to plant green, there’s going to be an evolution in equipment,” he says. “We’re going to need different planters to get through this high biomass cover crop. And I honestly don’t know what it looks like.”

Hill speculates that something with depth-maintaining sensors, but without gauge wheels, might be on the horizon, but he’s never encountered that particular piece of equipment.

For now, Hill plans to continue to focus on finding better ways to farm sustainably.

“Sustainability is still critical to my farming experience,” he says. “There’s always room to improve. I don’t think I’ll ever be content with our level of sustainability as it relates to the environment and climate.

“We’re going to try to continue to be more sustainable every year.”