The Ag Economy Barometer is calculated each month from 400 U.S. agricultural producers’ responses to a telephone survey. This month’s survey was conducted from August 17-21, 2020. 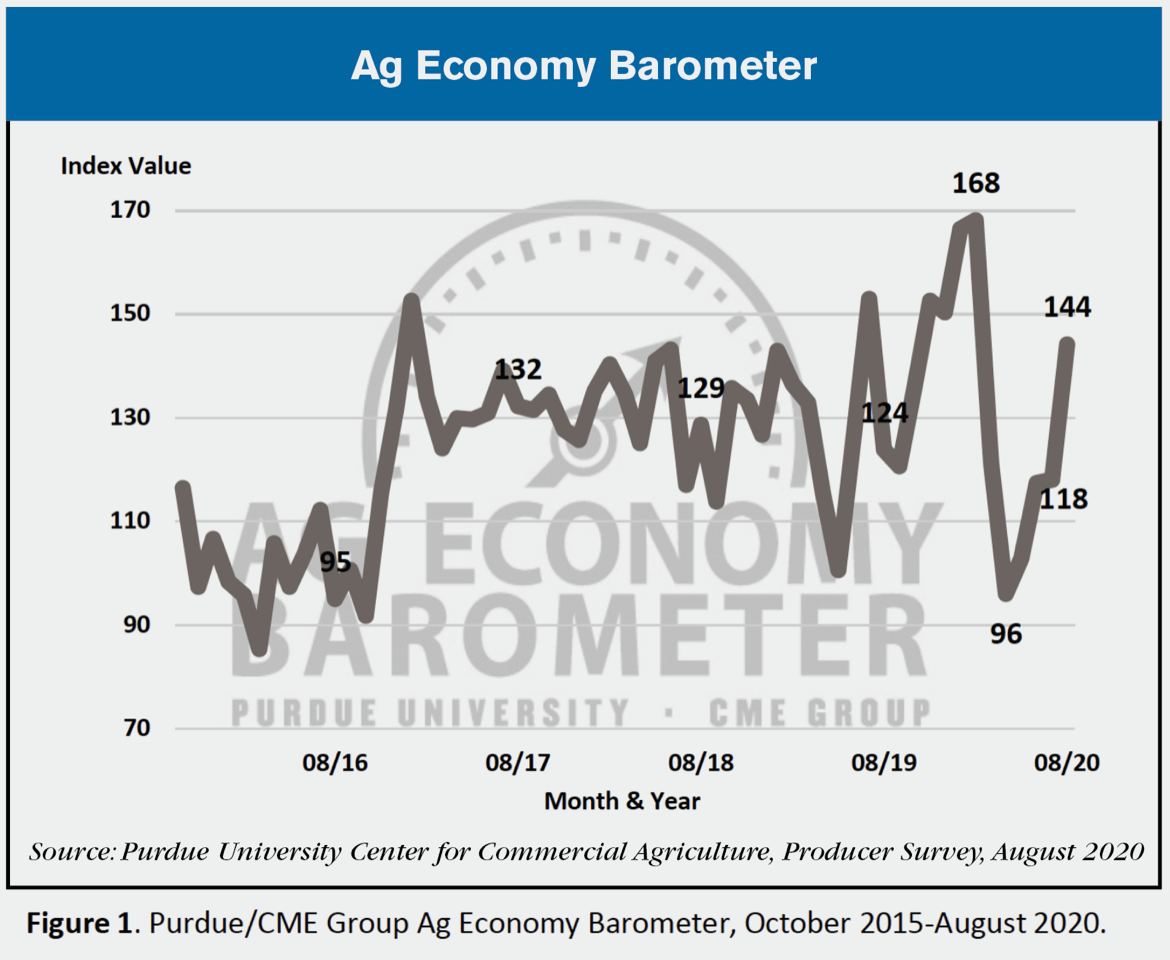 The barometer and its two sub-indices all posted their most positive readings since February 2020 when record highs were established and before the pandemic began. The improvement in farmer sentiment this month was underpinned by expectations for excellent crop yields, as indicated in USDA’s August Crop Production report, and nearly across the board rallies in key ag commodity prices that took place in August. For example, compared to lows established in early August corn, soybean, wheat, cattle and hog prices all rallied during August. 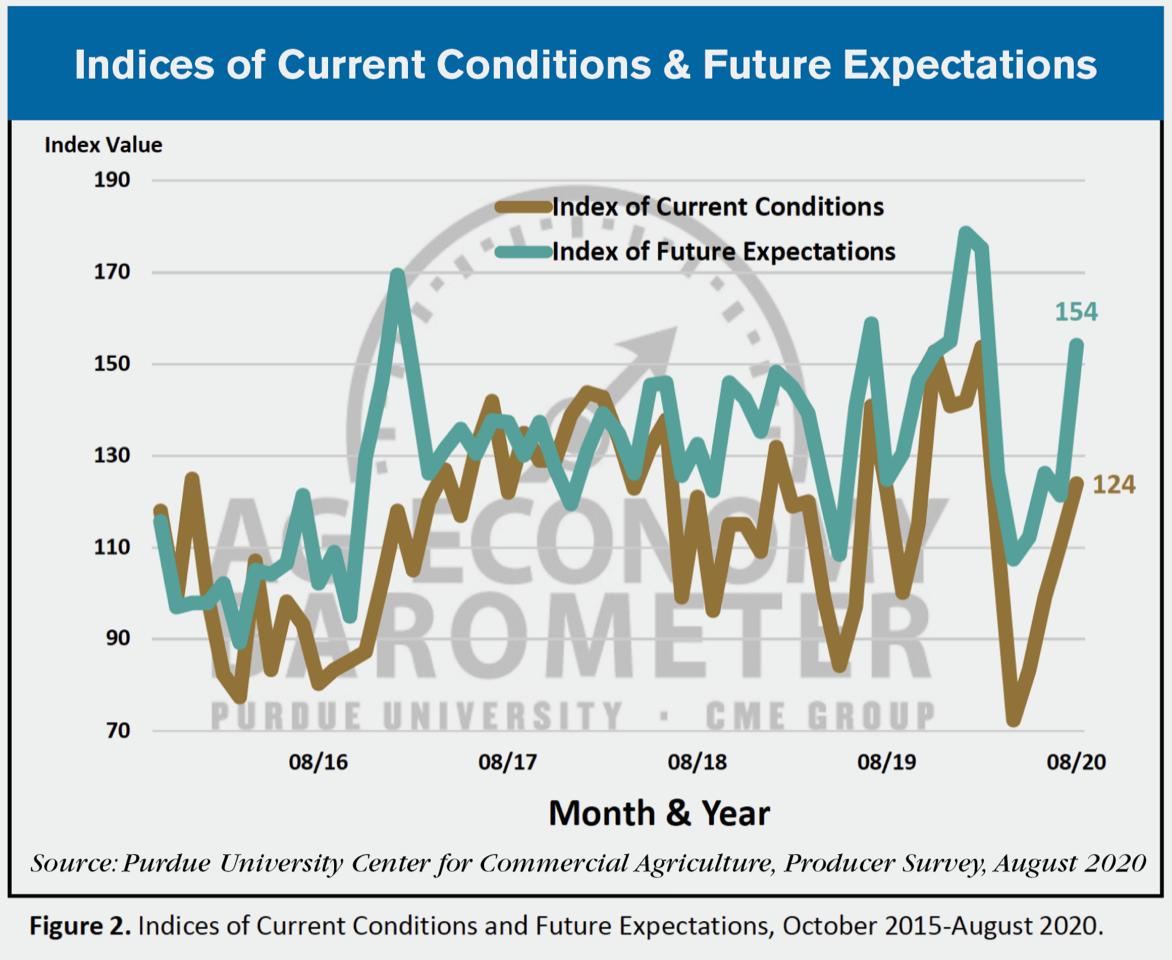 The Farm Capital Investment Index rose 5 points compared to a month earlier to a reading of 65 which, similar to the other indices, was the most positive reading since February. When asked specifically about plans to purchase farm machinery in the upcoming year, fewer farmers (48%) in August reported that they plan to reduce their purchases this year than in prior months. It is worth noting that while 48% is a high%age of farmers who plan to hold back on machinery purchases, this%age has been declining since reaching a peak of 65% in May. 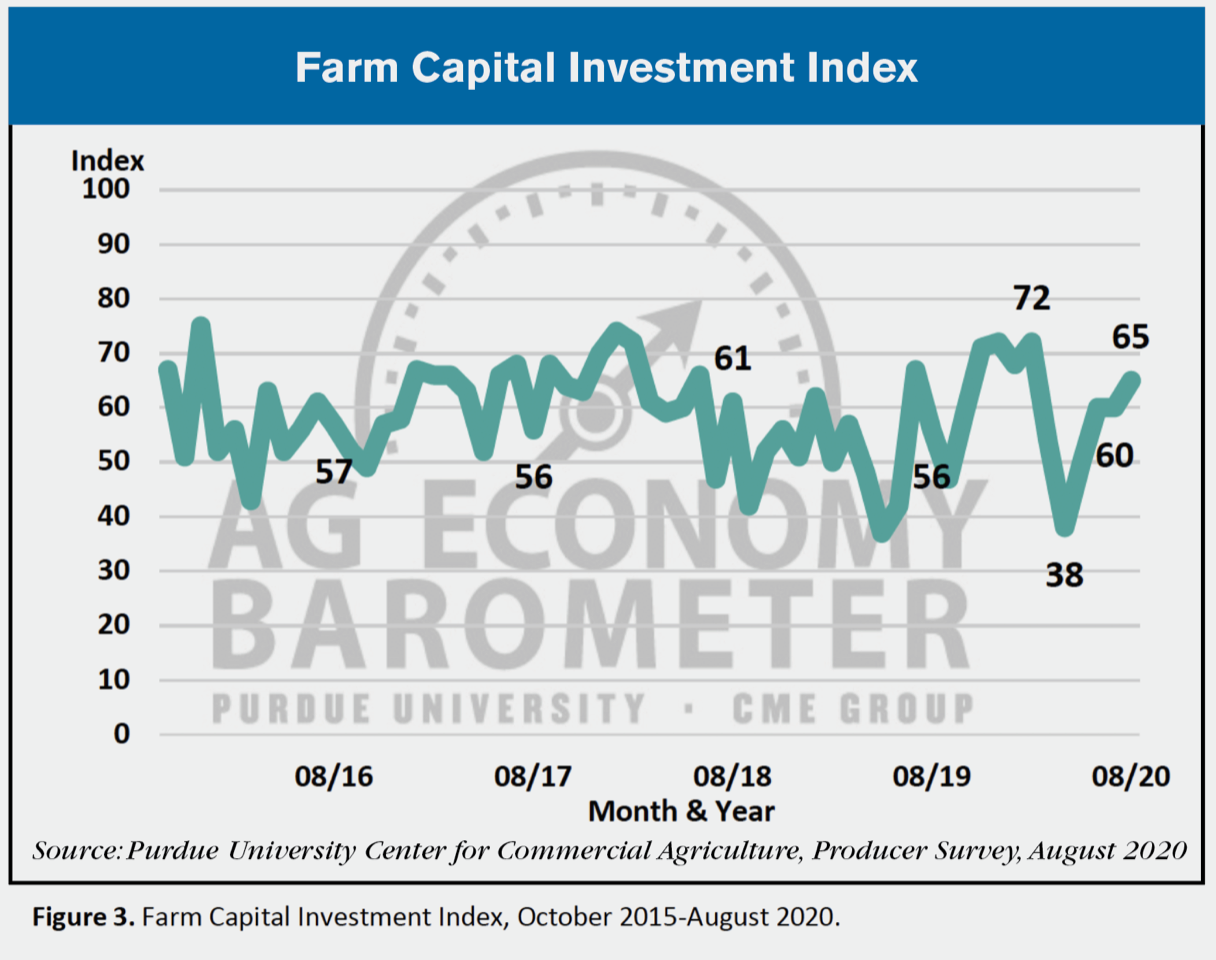 Farmers became more optimistic about farmland values this month compared to July. When asked about their short run (12 month) outlook, the percentage of producers expecting farmland values to increase rose to 20% from 16% in July and compares to just 7% who expected higher values back in April.

Producers longer run perspective on farmland values was also more optimistic this month than last. When the same question was posed on the survey with a 5 year time horizon instead of a 12 month horizon, the percentage of producers expecting values to increase rose to 59% from 48% in July and just 40% who expected higher values back in May. 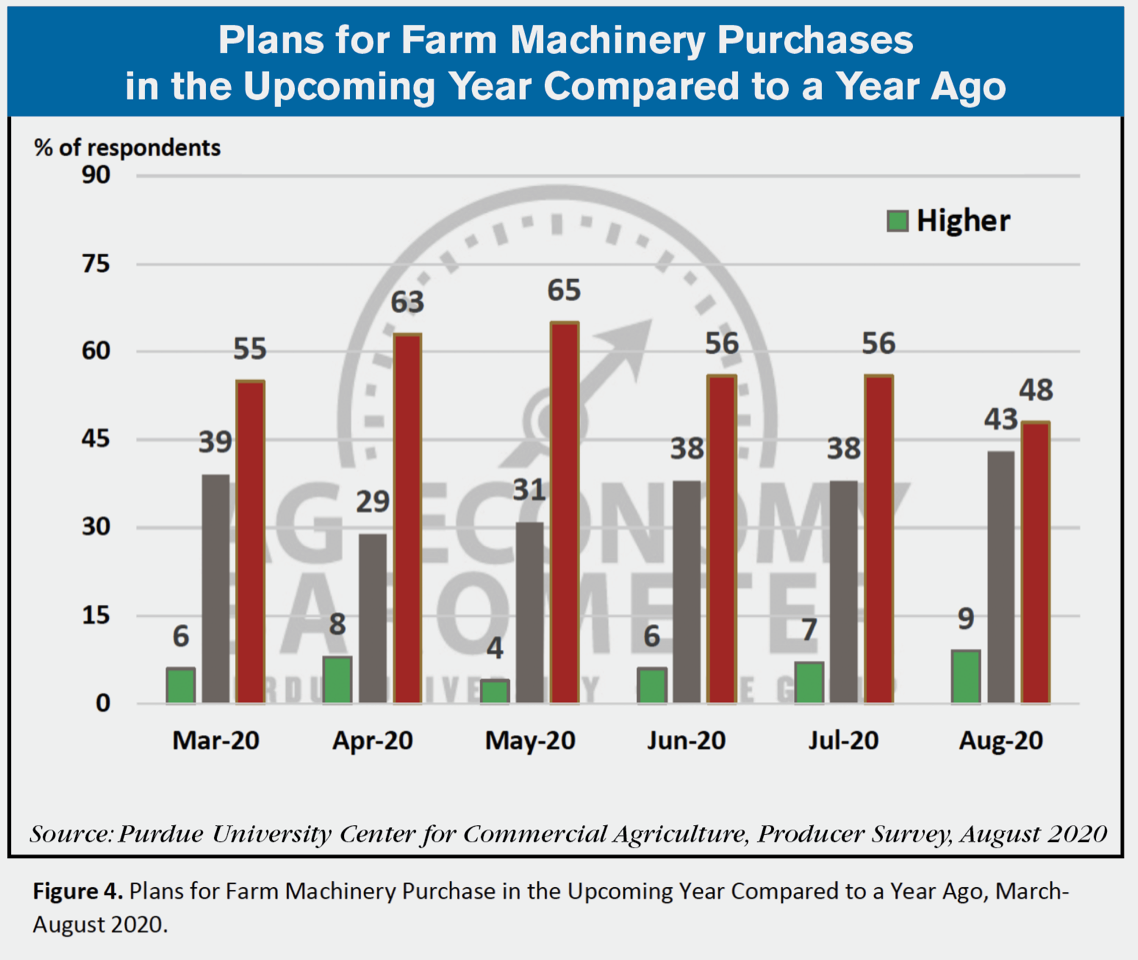 Farmers also became more optimistic about U.S. agriculture’s trade prospects in August. For the last several months the percentage of farmers reporting that they expect U.S. agricultural exports to increase over the next 5 years ranged from 55-57%. In August, the percentage of producers expecting exports to rise spiked to 67%. Although this is still less optimistic than in late 2019 and early 2020 when 70-72% of respondents said they expected to see ag exports increase, it was a notable departure in sentiment when compared to the April to July time frame and could be based in part on rising export sales to China this summer.

Each summer we’ve been asking survey respondents their opinion regarding changes in farmers’ equity position over the upcoming year. We first posed this question in August 2016 and have included it on the survey each August since that time. The percentage of respondents in the August 2020 survey who expect equity to decline in the upcoming 12 months, while still large at 38%, was the second lowest percentage since we launched our farmer survey and was well below a year earlier when 48% of respondents said they expected farmers’ equity to decline.

Farmer sentiment rebounded in August as the Ag Economy Barometer rose 26 points from a month earlier to a reading of 144. Producers were more optimistic about current conditions in agriculture and especially about the future as the Future Expectations Index climbed 33 points from July to a reading of 154. All three indices reached their highest level since record highs were established back in February. 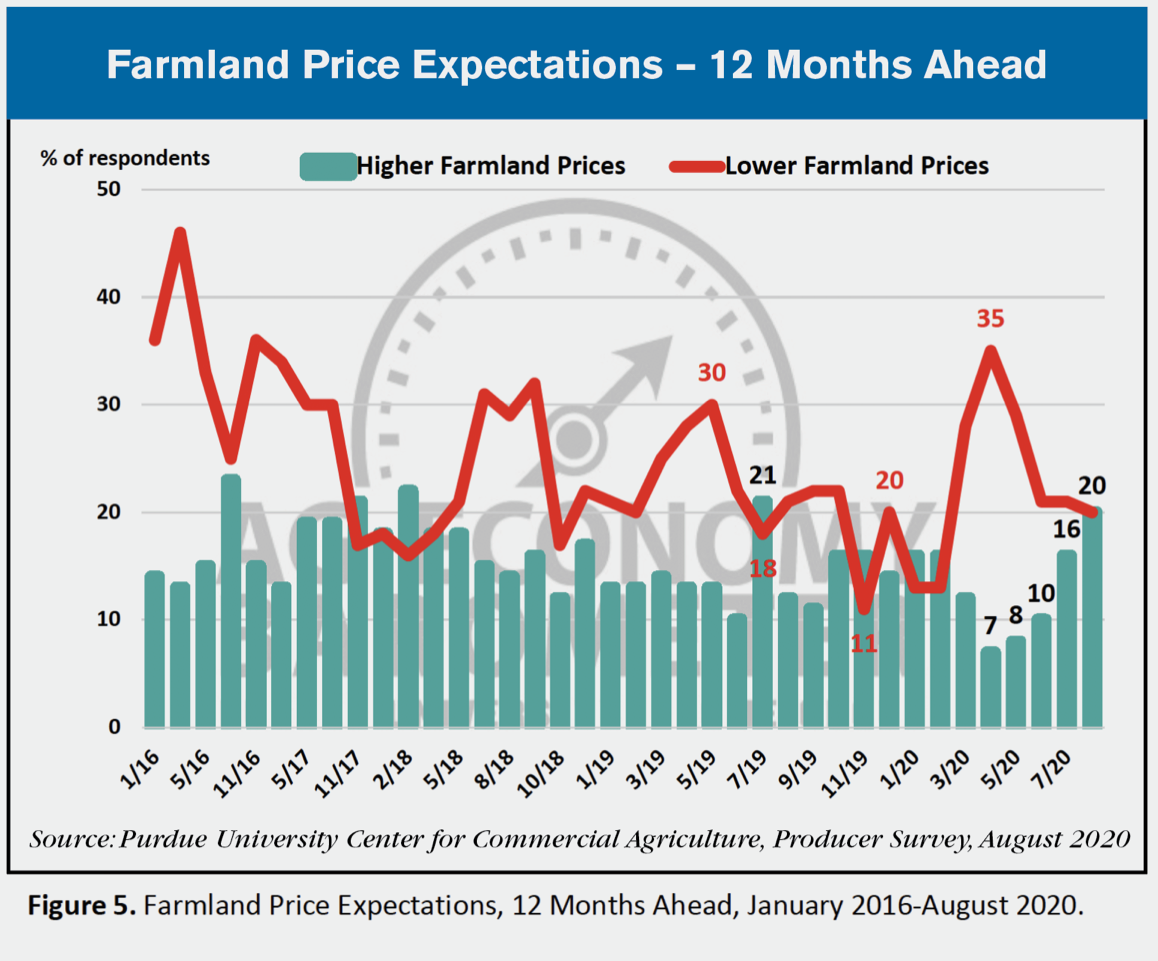 Expectations for excellent crop yields this year combined with price rallies during August for most agricultural commodities underpinned this month’s sentiment improvement. Producers also indicated they were more optimistic about agricultural exports increasing than in recent months, perhaps as a result of recent news about additional export sales to China. As a result of COVID-19, many educational programs are transitioning to virtual events. Just 19% of survey respondents said they attended a virtual field day or conference this summer, but nearly half (44%) of respondents said they are interested in attending a virtual event this fall or winter.