As previously announced, beginning with this release the company will report its results on the basis of two divisions, Industrial and Agricultural, which includes their respective parts of the former European Division.

The results for the fourth quarter of 2019 included the effects of the acquisitions of Dutch Power, completed in March 2019, and Morbark, completed in October 2019. Excluding the effects of these acquisitions adjusted net sales for the quarter were $256.4 million and net income was $15.5 million compared to $16.3 million in 2018. The acquisition of Dixie Chopper was completed in August 2019, although their results for the fourth quarter and for the year ended Dec. 31, 2019 were immaterial and are not included in the adjustments.

Results for the Full Year 2019

"There were certainly challenges during the year,” said Ron Robinson, Alamo Group’s president and CEO. “Some of these were not new, such as the ongoing weakness in the agricultural markets worldwide. The U.S. markets for our agricultural products remained weak throughout the past year and Europe, which had seemed a little more stable going into 2019, exhibited slowing conditions as the year progressed. Some of our other agricultural markets such as Brazil and Australia were soft as well, made worse in Australia by major, widespread wildfires.”

Robinson added, "We also are pleased that as we moved into 2020, we started to see some positive signs in some of the areas where we experienced challenges last year. In our Agricultural Division, our bookings in the fourth quarter were 45.9% above the previous year's fourth quarter. While this is certainly not a trend, any improvement in the agricultural market is a welcome development.” 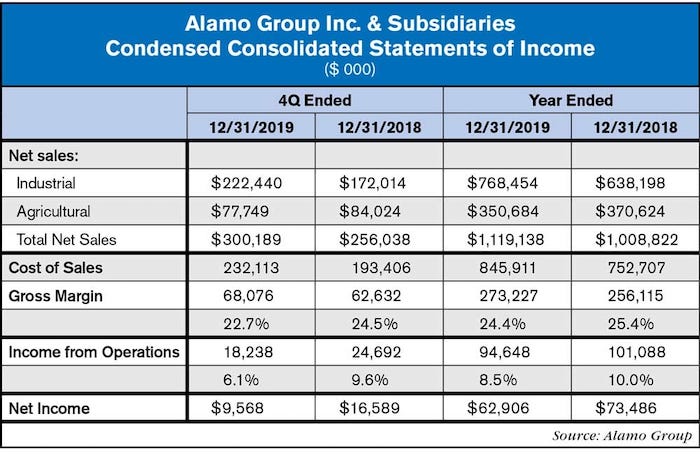