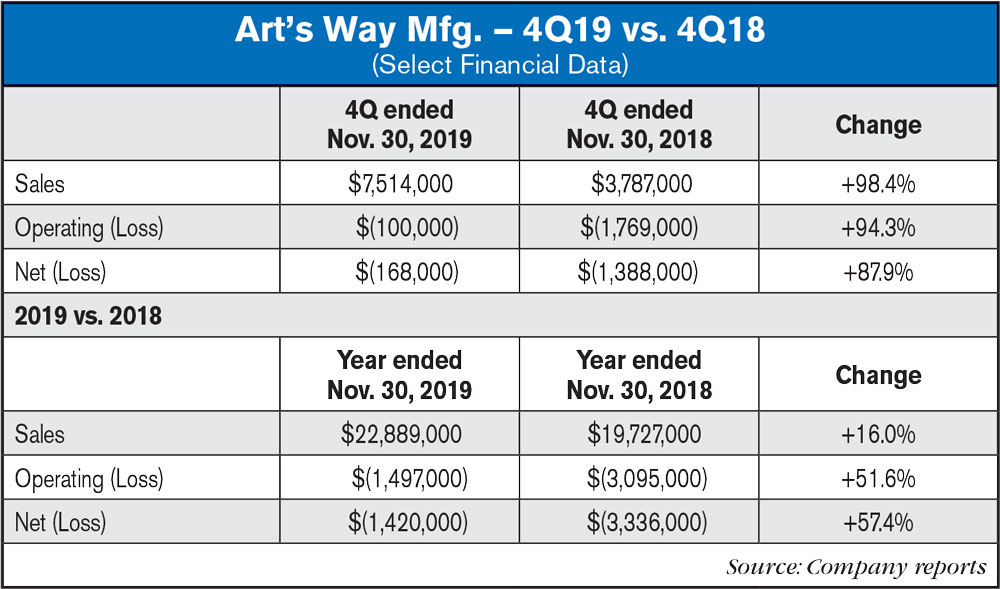 Consolidated net sales for continuing operations totaled $22,889,000 for the 2019 fiscal year, which represents a 16% increase from consolidated net sales of $19,727,000 for the 2018 fiscal year. The Agricultural Products segment's sales revenue for the 2019 fiscal year was $13,508,000 compared to $14,344,000 during the 2018 fiscal year, a decrease of $836,000 or 5.8%. The company saw decreased demand for portable feed equipment in the 2019 fiscal year. Continued struggles in the dairy market, coupled with market shifts to large cattle operations from the traditional small cattle farmer also contributed to this decrease. Additionally, the company also saw a decrease in sales of UHC reels year-over-year due to a loss of a primary reel customer after a strategic decision to not offer customer discounted prices at unfavorable margins. Moreover, OEM blower revenue in the 2018 fiscal year was not repeated in the 2019 fiscal year as the company's OEM blower customer elected not to purchase any blowers from in 2019 due to slow-moving inventory on dealer lots relating to poor agricultural market conditions. While the company saw decreased demand in the above product lines, the company also saw increased demand in dump boxes, land maintenance equipment, bale processors and beet equipment.

Chairman of the Art's Way Board of Directors, Marc H. McConnell reports, "After a year that has been quite challenging, we are quite encouraged to see significant improvement in the fourth quarter in revenue, profitability and backlog. These outcomes are most attributable to a large ongoing project at Art's Way Scientific as well as meaningful improvement in demand for farm equipment. This improvement in demand is driven by favorable commodity prices coupled with new products being well-received by the market.

As we look ahead to 2020 we are pleased to have a strong backlog of work in front of us in all segments and expect that this strong demand will continue as international trade deals are finalized, commodity prices continue to rebound and a degree of certainty and stability returns to the agricultural industry at large."

Art's Way Mfg. also announced that Michael Woods has been promoted to chief financial officer effective Feb. 1, 2020. Prior to this position, Woods served as the vice president of finance for Art's Way. Woods has 8 years of experience in various financial and accounting positions, and he initially joined Art's Way in April 2016.

Woods began his career in public accounting at Brinkman and Reed, CPAs and worked at XPO Logistics. Woods graduated from Iowa State University, Ames in December 2010 with Bachelor of Science degrees in Accounting and Finance and earned the CPA designation in October 2013.