Raven Industries is reporting that net sales for the third quarter of fiscal 2020 were $100.5 million, down 4.1% vs. the third quarter of fiscal 2019. Each division experienced a modest year-over-year decline in net sales. Applied Technology, which includes Raven’s precision farming operations, was unfavorably impacted by the continued challenges in the North American ag market.

During the third quarter, the company also recognized $0.4 million of transaction expenses related to the acquisition of Smart Ag and controlling ownership in DOT. Net income for the third quarter of fiscal 2020 was $9.9 million share, in last year's third quarter.

The Company recently announced details of its 5 year strategic plan, which includes significant investments in two targeted areas in order to drive a step change in long term earnings growth. The strategic growth platform for the company’s ag operations, Raven Autonomy, directly aligns with the company’s business model, which is to serve market segments with strong growth prospects in both the near and long term.

Raven Autonomy is expected to enable Applied Technology to capitalize on the rapidly developing market for autonomous agriculture solutions. Raven Autonomy is expected to propel the company's Applied Technology Division to become the industry leader in autonomous agricultural solutions. The Company recently announced two transactions — acquisition of Smart Ag and investment in the controlling ownership interest of DOT — as part of the execution of the Raven Autonomy strategy. These acquisitions will allow the division to build upon its existing machine control technology while innovating smart machine platforms and implements to achieve fully-autonomous solutions across the farming enterprise. Integration efforts are underway for both transactions. 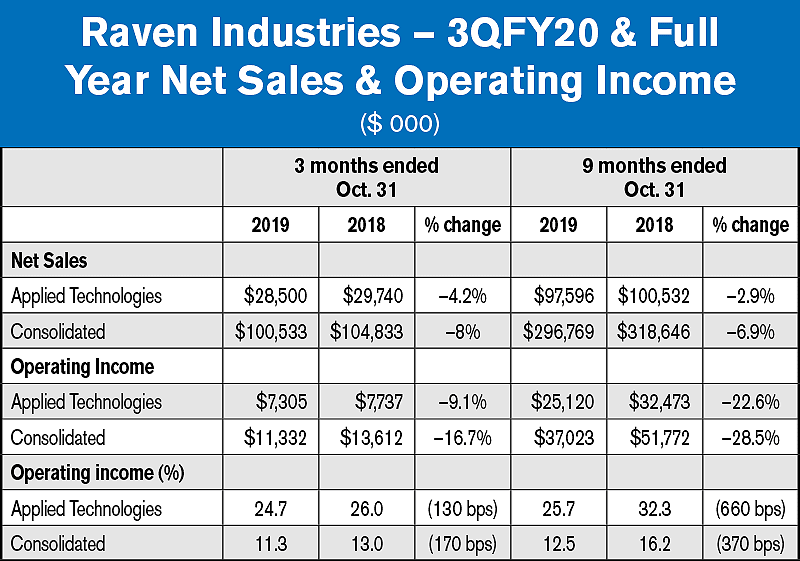 Net sales for Applied Technology in the third quarter of fiscal 2020 were $28.5 million, down 4.2% year-over-year. Unfavorable weather and poor yield conditions during this year's growing season in North America negatively impacted end market demand more than the company had anticipated.

This weakness in end market demand resulted in additional OEM plant shutdowns during the third quarter, which drove a 13.5% decrease in sales to the OEM channel. Despite these end market challenges, the aftermarket channel showed signs of strength and grew 4.8% year-over-year aided by the first shipments of VSN, the company’s visual guidance technology.

The year-over-year decrease was driven by negative operating leverage as a result of lower sales volume, temporarily higher warranty expenses and increased investments in research and development to support the division's continued commitment to innovation.

The North American ag market continues to be negatively impacted by unfavorable weather and low commodity prices, while U.S.-China trade developments continue to drive uncertainty in the marketplace and negatively impact farmer sentiment. These factors have reduced farm income, and OEMs have responded with lower production of new machines. In the short term, the company does not anticipate improvement in ag market conditions nor an increase in demand for precision agriculture equipment.