Washington, D.C. — On Thursday, May 23. U.S. Secretary of Commerce Wilbur Ross presented Ace Pump Corporation of Memphis, TN with the President’s “E” Star Award for Exports at a ceremony in Washington, D.C.  In total, Secretary Ross honored 48 companies with the President’s “E” Award, the highest recognition any U.S. entity can receive for making a significant contribution to the expansion of U.S. exports.

Upon receiving the award, Ace Pump chief executive officer Andy Randle stated, “In accepting this award, I would like to give credit to all of our employees and especially Paul Gannom, our export manager. We also appreciate the hard work of our international distributors, the U.S. Department of Commerce and the Export-Import Bank for their combined efforts in making our products available to the world market.  Our growth in international sales can be attributed to our highly engineered, world-class products and the development of personal relationships that have brought the unique culture of Ace Pump Corporation to customers throughout the world.” 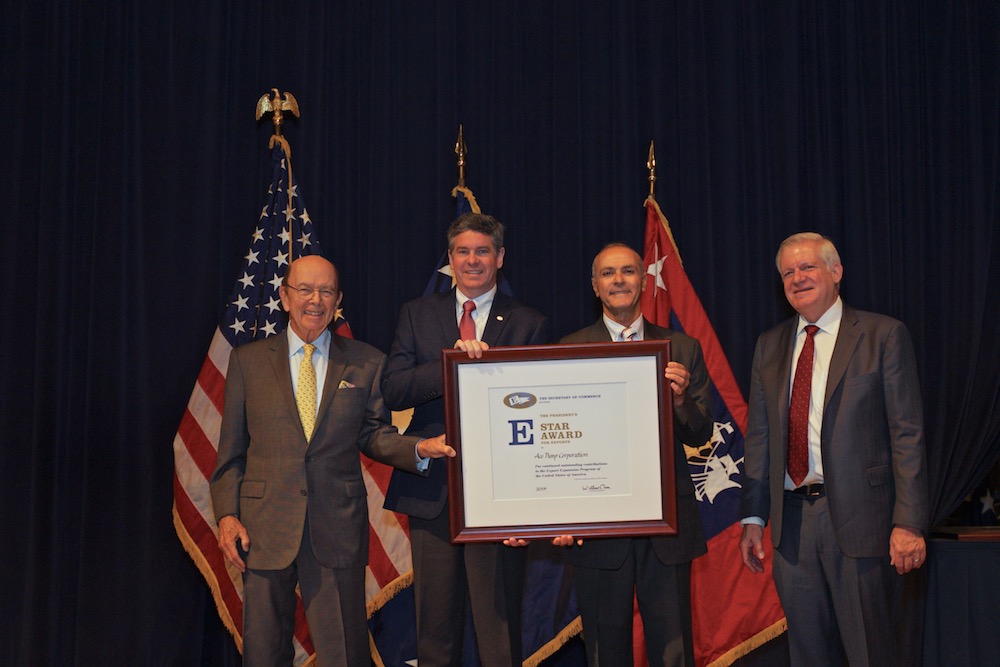 According to Randle, the company’s chief exports are centrifugal pumps for the application of herbicides, pesticides and liquid fertilizers in agriculture. Exports account for approximately 23 percent of Ace Pump’s annual revenues. Ace Pump sells to more than 15 markets worldwide with Canada, South America and Europe being the company’s main export destinations.

In 2018, U.S. exports were the highest on record with U.S. services at $821.1 billion and U.S. exports of goods reaching $1.7 trillion, demonstrating how American private enterprise can not only survive, but thrive, in the international market.

American companies are nominated for “E” Awards through the U.S. and Foreign Commercial Service office network, located within the U.S. Department of Commerce’s International Trade Administration. Record years of successive export growth and an applicant’s demonstration of an innovative international marketing plan that led to the increase in exports is a significant factor in selecting the overall winners.