Brent Bazin, corporate service manager at Young’s Equipment, shared the dealership’s history with international recruitment and why they see it as a valuable option when looking for new employees.

A talented technician cannot be found overnight. When there are not enough near your dealership looking for work, you need to come up with a new strategy to bring in a good technician. Within the few last year, Young’s Equipment has hired a number employees from overseas as part of the international hiring strategy they started over a decade ago.

In 2004, Young’s Equipment, a Case IH dealerships with 9 locations across Saskatchewan, made its first trip overseas to a job fair in Germany. Initially, the dealership was going over there on an invitation from Canada West Equipment Dealers Assn. (now Western Equipment Dealers Assn.) As these trips went on, Young’s started traveling to Germany and other parts of Europe with other employers and the Saskatchewan Immigration Nominee Program (SINP). “We got pretty comfortable in doing what we needed overseas, whether we just signed up for a job fair or talked to people on our own,” says Brent Bazin, corporate service manager at Young’s Equipment and Agricultural Equipment Trade Board Member for the Saskatchewan Apprenticeship and Trade Certification Commission.

Since starting, Young’s has been to Ireland, Germany and England. They have hired techs from those locations as well as Australia, the Netherlands, New Zealand and the Ukraine, each of who came to Young’s upon hearing that the dealership was hiring overseas.

When they first traveled overseas, unemployment rates in Germany were over 20-25% in specific age groups. The rates were high enough that, according to Bazin, the German government was working with immigration and CWEDA to get people employed. Similarly, when Young’s went into Ireland searching for recruits in 2008, the unemployment rates had many looking for jobs and even paying to get into job fairs, says Bazin.

The Process of Hiring Internationally

As they started going through the process of bringing people from overseas into the dealership, Young’s Equipment worked closely with the Saskatchewan Immigration Nominee Program (SINP). This is a program in the province that recognizes when there are skilled labor shortages in certain industries — in this case, mechanics — and works with employers to bring people in from outside of Canada.

“One of the biggest advantages we had is that because we got at it early, we learned internally what was needed as far as the paperwork went with the government, government programs and immigration. We handled all of that stuff ourselves,” says Bazin. “In a lot of ways, it was very comfortable for an employee to make that transition knowing that their employer would be right in there involved with all the paperwork and all the bureaucratic hurdles.”

From the start, Bazin is upfront with overseas hires, telling them it is expected that when they come to the dealership, they stay. Like most dealers, Bazin finds it costs too much time and money to train techs and integrate them to the dealership if they are only going to be there short-term. He has found that 90% of the time, family is what drives people to return to their home country. A positive economic turn back home is also a driving factor that causes some employees to leave the dealership. 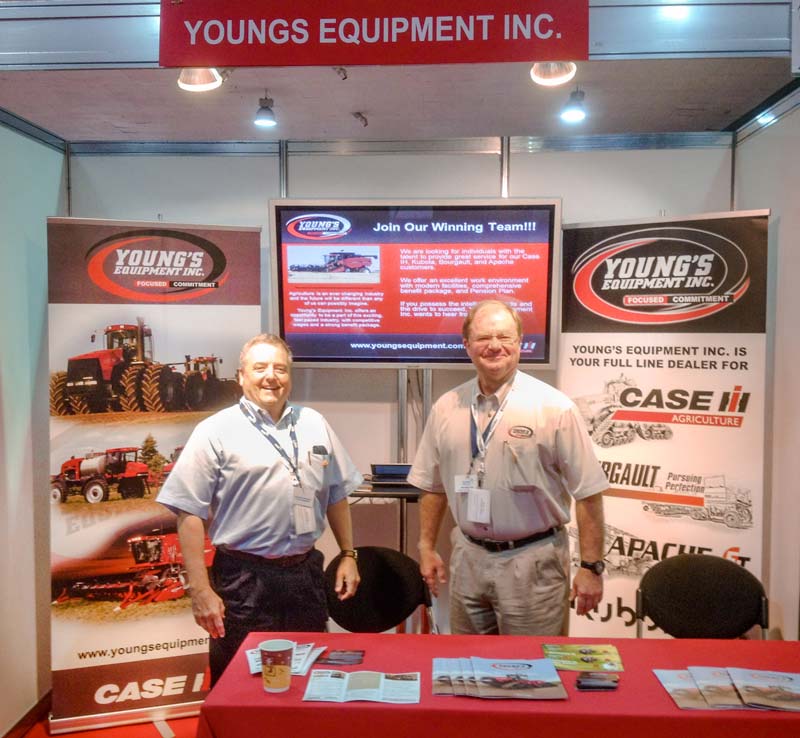 Brent Bazin (left) and Tim Young (right) at one of many job fairs they attended in Ireland.

The perfect situation is having an employee come in and eventually become a Canadian citizen and settle down with a family. This is something that a couple of employees from areas like Germany, Ireland and Australia have done over the years according to Bazin. In order to get there and keep employees at the dealership, Young’s works on getting them to the point where they can become a permanent resident as quickly as possible. Permanent residency is the step between being an immigrant and becoming a Canadian citizen and must occur before citizenship is an option. Obtaining permanent residency means they can maintain their citizenship in their home country while also having access to training and government programs in Canada, plus they do not need to obtain a new work visa when returning to Canada.

How to Keep International Employees

According to Bazin, 30-35% of the international hires have stayed with the dealership, some of which are now Canadian citizens with families. Of course, that still leaves around 70% who do not stay on. While there are some horror stories that go around about employees or employers taking advantage of the other in these situations, Young’s has been able to avoid most of that through their screening process.

One of the key factors Young’s Equipment looks at when hiring is suitability. Most technicians coming from Europe are working on trucks and heavy-duty machinery; not many are ag equipment technicians. Regardless of the equipment these technicians are experienced with, Young’s will hire them if they are a good fit.

“It doesn’t matter if it’s a truck or a combine, the mechanic principles are the same,” says Bazin. “It really comes down to them understanding our products and what we do with them.”

In order to find people that are the right fit for the dealership, the Canada Equipment Dealers Foundation and WEDA created a mechanics test that is broken down into 9 sections: General Shop Knowledge, Tools and Safety; Engine Basics; Engine Troubleshooting/Tune Up; Power Trains/Drivelines; Electrical Principles; Electrical Circuits and Schematics; Hydraulics; Diesel Engines; and Air Conditioning Systems. While the test is not the only factor in play when hiring someone, it is a helpful tool for seeing what kind of knowledge the potential employees have.

Another tool used within the dealership is a Predictive Index to measure a person’s personality. This index helps determine traits such as being introverted or extroverted. The results are compared to the role the person applied for to see if their personality fits the position. The last part of determining suitability for Bazin is in getting the international hire through their first Canadian winter.

The Future of Hiring Internationally

While Young’s has not physically gone overseas in the last 3-4 years, it still has international recruits applying to the dealership, hiring 2 within the last year. “With the efforts we have done in the past and the way we are putting some of our job applications out there, we are still hiring workers from overseas,” says Bazin.

Right now, Bazin does not see Young’s Equipment traveling overseas for employees in the coming years. Much of this is due to the changing labor market in Western Canada, particularly with less pressure from the oil industry. When that industry is in a slump, there tends to be an influx of trained technicians looking for work. The oil industry was also why Young’s Equipment was looking overseas 15 years ago. Back then, it was doing so well that they could not find technicians to bring into the dealership.

“The best way to put it is it's going to be a tool that's in our toolbox — one of many — and it’s a pretty large part of our overall hiring strategy.”

Putting Technicians in the Pipeline