Stable development in the agricultural machinery markets despite regional drought:

“We have continued our growth in a volatile market environment and once again significantly improved our profitability. A strong impetus originated from Germany and Western Europe in particular,” said Hermann Lohbeck, speaker of the Claas Executive Board.

The global market for professional agricultural technology saw continued development this year, in line with associated expectations. Against this background, Claas improved revenue in core countries including Germany, France and the United Kingdom. In Eastern Europe, a slight project-related decline in sales was observed. A mixed picture emerged in the countries outside of Europe: while sales in North America increased in the local currency, China recorded a decline as a result of market uncertainty.

With the European launch of the JAGUAR 960 TERRA TRAC, Claas was the first manufacturer to bring a forage harvester with an integrated crawler track solution to the market. The new, award-winning concept offers the best soil protection in all conditions. The JAGUAR will be complimented by a new ORBIS corn header designed to provide an optimal crop flow. The TUCANO combine harvester range, not available in North America, has entered the next generation with an expanded range of models.

Investments in fixed assets are increasing significantly
CLAAS not only invested in new products but also in an innovative working environment. Investments in fixed assets are rising noticeably. The course remains set for growth in the tractor business with the modernization of the main assembly line started in Le Mans, France. The customer-oriented service and replacement parts business is also being expanded.

Moreover, a new high-bay warehouse is being built in Hamm, Germany, which will double capacity to 58,000 pallet bays. The new test center for machine components was completed at the main production facility in Harsewinkel, Germany. In addition, larger investments were made on new distribution centers in the United Kingdom and France. 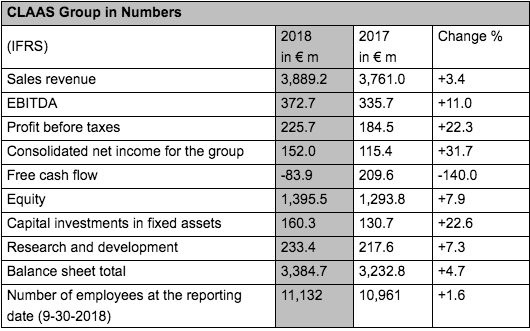 Outlook
Claas expects stable development in the global agricultural engineering markets for the 2019 fiscal year, despite regional uncertainties. Increasing demand for professional agricultural technology continues to be a driving force. General risks lie particularly in global trade disputes that also affect agricultural goods. In view of this market assessment, Claas expects sales revenue slightly above the level of the previous year for the current business year and a stable result before taxes.