Titan Machinery reported its second quarter equip­ment sales were up nearly 15% vs. the same period last year with revenue from ag equipment up over 10%. Overall revenue increased by 11.5%. Gross profit was up by 11.6% and gross profit margin remained steady at 19.6%.

Along with its improving financial condition, the deal­ership group emphasized the improvements it’s making in its operations, most notably in absorption rate and inventory turns. These metrics are key benchmarks in evaluating a dealership’s operating performance.

“Along with increased equip­ment revenues, we also saw increased revenues from our parts and service businesses in the second quarter, which benefited from the late start to the spring planting season in many of our domestic and European markets,” said David Meyer, Titan Machinery’s chairman and CEO.

In addition to the double-digit increase in ag equipment sales that Titan experienced during the second period of its current fiscal year ended July 31, the company reports that each of its major revenue drivers improved vs. the same quarter of the previous year. Parts sales increased by 8%, service by just under 3% and rental revenues were up by nearly 7%. In addition, Titan Machinery’s international sales saw a jump of nearly 30% compared to the second quarter of last year. Sales of construction equipment lagged compared to the other segments, registering only a 1.7% gain for the quarter.

For the full year, Titan Machinery expects ag and construction equipment sales to be flat to up 5%, while international sales growth is expected to come in at 10-15%. The company is projecting equipment margins to be in the 8.7-9.2% range, which is up slightly from the company’s earlier projections of 8.2-8.7%.

Commenting on the current solid demand for new machinery, Meyer said, “We believe replacement demand is real. We attribute this demand to the extended aging of existing fleets along with the increased yields and productivity associated with the technology and precision of today’s new and late model used equipment. With the extended hours in age of fleets, we expect a high customer take rate with our uptime inspection program. Overall, our farmers continue to maintain strong balance sheets despite the challenges in low commodity prices and fairly flat year-over-year net farm income projections.” 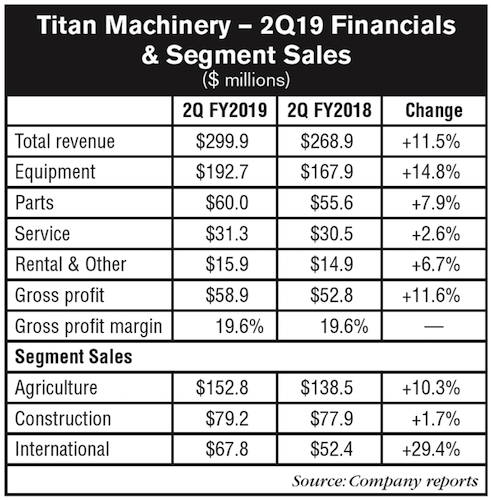 Company CFO Mark Kalvoda added, “We have reduced our annual operating expenses from fiscal 2014 to the trailing 12 months ended July 31, 2018 by $94 million or 32% and over the same time period increased our absorption rate from 71% to 82%.” The reduced expenses, along with the strength of Titan’s parts and service business in the second quarter helped move the dealership’s absorption levels to nearly 89%.

Kalvoda also noted Titan’s improving inventory controls are adding to the group’s overall performance. “Our equipment inventory at the end of the second quarter was $474 million, an increase of $74 million from Jan. 31, 2018, made up of an $88 million increase in new equipment partially offset by a $14 million decrease in used equipment.

“The increase in new equipment inventory is primarily in core products for seasonal stocking and purchasing equipment ahead of steel surcharges later in the year. Our equipment inventory turns improved to 1.7 from 1.6 in the prior year comparable period,” Titan’s CFO said. 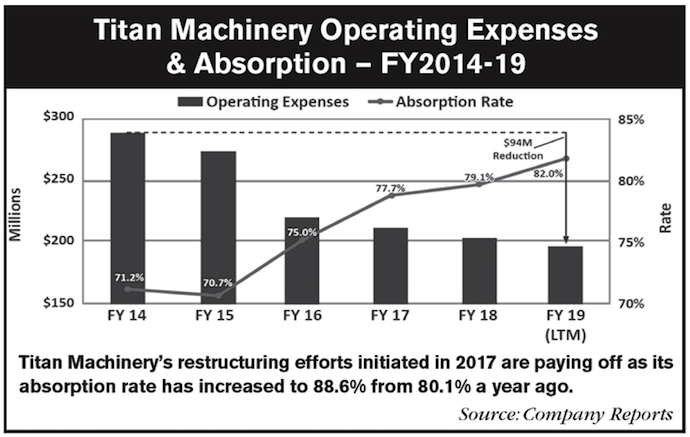 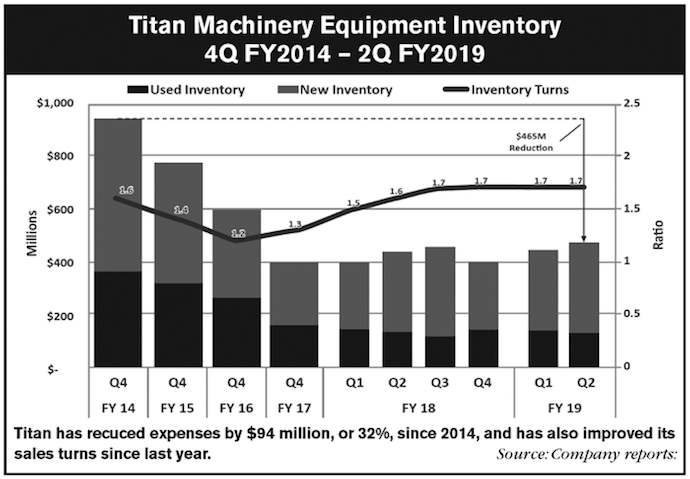 Titan Machinery Posts Strong Gains Across All Segments in 1QFY20