In this episode we report on Deere & Co.’s third quarter earnings, which saw net sales increase 32%. In the Technology Corner, Jack Zemlicka discusses precision farming dealers’ 5-year investment projections. With uncertainty stemming from tariffs, trade and commodity prices we also look at how manufacturers, dealers and producers are responding. Finally, according to the Federal Reserve Bank of Minneapolis, farm income, capital spending and farmland values are all down.

On the Record is brought to you by AgDirect.

Twenty years ago, AgDirect financing was created to meet the changing demands of equipment dealers as well as their customers. With its attractive rates and ag-friendly terms, AgDirect became one of the fastest-growing programs of its kind. Today, thousands of dealers and dozens of brands across the country rely on AgDirect as a risk-free source of credit for financing, leasing and refinancing ag equipment.

Thank you for 20 years of growth and success. Visit Agdirect.com. 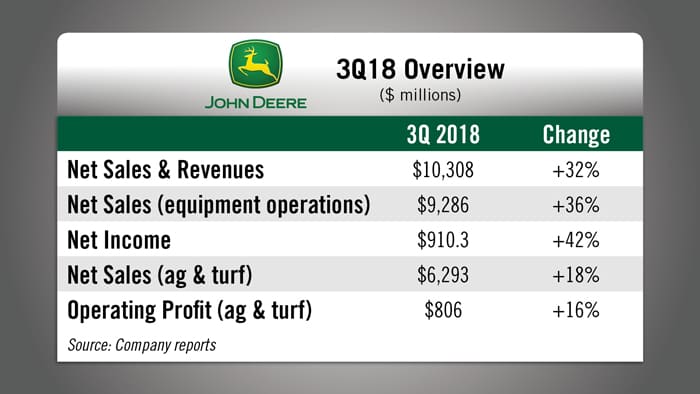 Company equipment sales are projected to increase by roughly 30% for fiscal year 2018 and by about 21% for the fourth quarter compared with the same time periods last year. Worldwide sales of ag and turf equipment are forecast to increase by about 15% for the fiscal year, and up about 10% for 2018 in the U.S. and Canada. 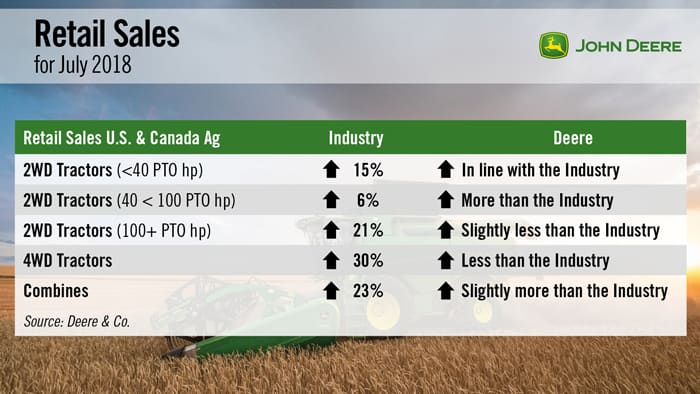 This week’s Dealers on the Move include Pattison Agriculture, C&B Operations and Farm Depot.

Canadian John Deere dealer Pattison Agriculture is opening a new facility in Leader, Sask. The dealership group is renovating an existing 9,600 square foot facility to accommodate a parts department, office and showroom with an additional 8,400 square feet dedicated to the service shop.

Now here’s Jack Zemlicka with the latest from the Technology Corner.

For the second straight year, employee training topped the list in 2018, with more than 71% of dealers viewing this area as the “most important” investment. 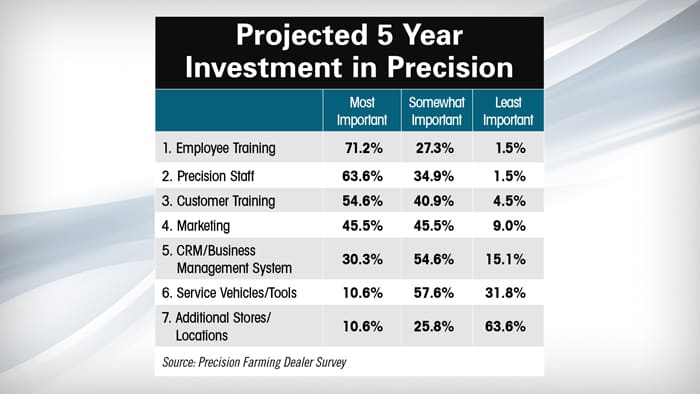 The importance of hiring and developing specialists goes hand in hand with training, as 63% of dealers ranked adding precision staff as the “most important” need to grow precision business in the next 5 years.

Less than 2% cited this area as “least important” tied with employee training for the lowest total.

Interestingly, in the short term, only about one-third of dealers cited additional staff as their greatest need to grow business in 2018, perhaps underscoring the scarcity of talent as well as the competitive landscape for reliable specialists.

Looking at other top priorities in the coming year, starting to bill for precision service remained a hot item with 51% ranking this as their “most important” area to grow revenue.

But interestingly, a high of nearly 20% of respondents also ranked this area as “least important” during 2018. Back to you Kim

Last month Farm Equipment traveled to Canada for the Ag in Motion farm show. While there, we caught up with Leah Olson, former president of Agricultural Manufacturers of Canada, to get her take on how U.S tariffs and trade issues are impacting farm equipment manufacturers in Canada.

She says when the steel and aluminum tariffs were first announced in March, immediate impact on the Canadian market was uncertainty. Prices have gone up, and she says prices moved up higher and more quickly in Eastern Canada than in Western Canada.

According to Olson, over $1 billion worth of equipment crosses the boarder from the Canadian side each year. She says the U.S. market is extremely important to Canadian ag equipment manufacturers. Likewise, a lot of equipment enters Canada through the U.S.

“The reaction from the manufacturers is a bit mixed. But again, we know that one of the highest prices that any farmers and ranchers are paying, is on their equipment. We want to make that so if they are paying higher prices, they're paying for something that is better, whereas this is increasing the price for a reason that is a little out of our control. For that reason, we're also trying to work with the governments to understand what is the key outcome that they're looking for, and how can we help them. Because I think with ag equipment manufacturing, we're a little more vulnerable to the tariffs then say the auto industry. From that perspective, I don't think that some of the governments really understood how quickly, and directly, the tariffs would hit the end consumers. We remain very concerned.”

Geoff Gray, president of Salford Group, says in order to deal with pricing uncertainty manufacturers have started bulking up their steel inventory so they have some stability, which in turn has driven prices up.

“We did price increases, like all manufacturers have done, and that's what you've been forced to do. There's nothing you can do about it. No use making equipment if you're losing money. And then, you're starting to, trying to put more steel in inventory so you have some stability. Of course, all the manufacturers are doing what we're doing. They're putting more steel in inventory to get stability, but that does drive the price up. So all the manufacturers are getting together and driving prices up together. What I'm finding is, we're talking to steel mills, as everybody's stashing steel aside, because that's the only way you have stability, if you know you have the steel.”

Charlie Glass, who writes a monthly Tractor & Combine analysis for Farm Equipment says, “The uncertainty that accompanied the current tariff disputes has produced a black cloud over future tractor and equipment sales. In spite of those concerns we continue to see some strength in the larger tractor categories and in combines this year.”

Between the uncertainty created by tariffs and trade and low commodity prices, both producer and dealer sentiment have fluctuated in recent months.

Recent surveys have shown both farmer and equipment dealer sentiments were deteriorating. At the same time, AEM reports that in July, North American sales of 100-plus horsepower tractors increased by 30%, the biggest monthly increase in over 5 years. Sales of 4WD tractors that same month were up 75%. Combine sales kept rolling too, up 30% in July. On average, they are up nearly 24% year-over-year during the 3 month period from May to July. 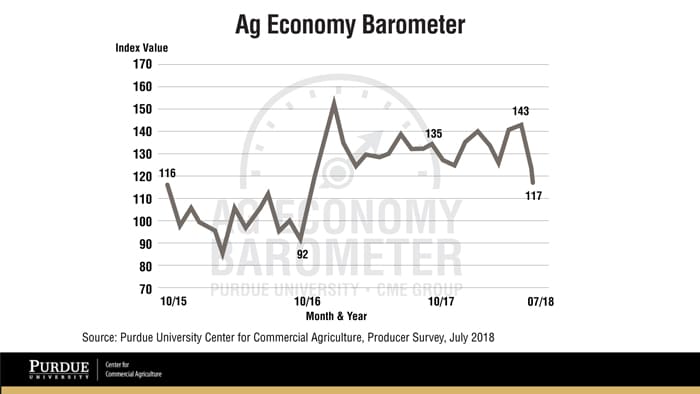 Meanwhile, the Purdue/CME Ag Economy Barometer, which measures farmer sentiment, declined 26 points to 117 in July “as the impact of commodity price declines and concerns about ag trade prospects weighed on producers’ perceptions of both current and future conditions in the agricultural economy.”

After a fairly consistent run of positive scores since last November, the Ag Equipment Intelligence Dealer Optimism Index, which measures sentiment among dealers compared to the prior month, dropped to –9% in June. This was the lowest reading since the –11% in July 2017.In July, Dealer Optimism was back up to +5%.

The Federal Reserve Bank of Minneapolis last week released its second quarter report, which indicated that spending on capital equipment and farm household purchases decreased from April through June. The survey of bankers also showed farm incomes fell during the quarter, which pushed the rate of loan repayments down slightly while renewals and extensions increased.

More than half of bankers responding to the quarterly survey said capital spending was down. And nearly half said farm incomes were down. Falling incomes also drove increase in demand for loans in the second quarter, with one-third of respondents indicating they saw growing demand at their banks. Fixed and variable interest rates for operating, machinery and real estate loans all increased modestly from the first quarter. 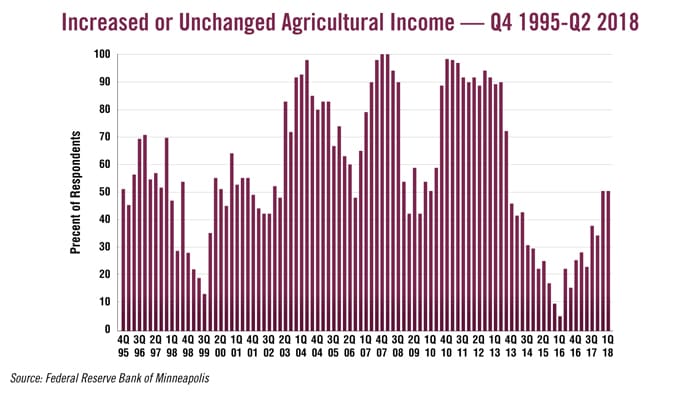 Meanwhile, the report found a moderate increase in land values, with the average value for non-irrigated cropland in the district increasing by more than 3% year-over-year, irrigated land increasing by 2% and ranchland values rising by between 2-3%.

The third-quarter outlook is for continued contractions due to further decreases in income, capital expenditures and household spending. More than half of respondents expect capital spending to fall and one-third expect loan demand to rise.

And now from the Implement & Tractor Archives… 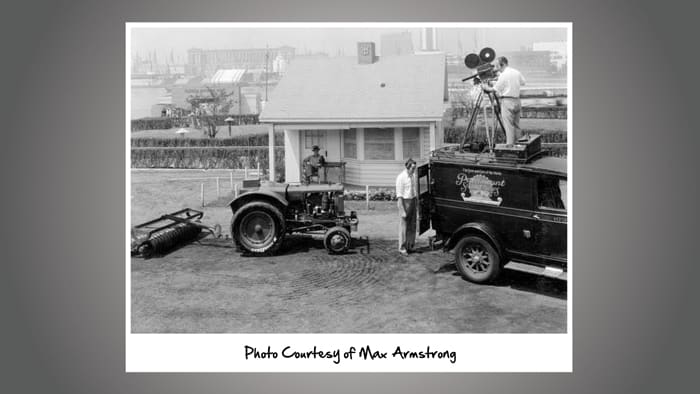 The Chicago World’s Fair — the Century of Progress — took place this week in 1933. During the fair, International Harvester displayed a radio controlled tractor concept. At the time, commercial AM radio had only been around for about 10 years. Now 85 years later, we’re just starting to see autonomously controlled equipment being developed in the ag industry.

As always, we welcome your feedback. You can send comments and story suggestions to kschmidt@lessitermedia.com. Until next time, thanks for joining us.

[Podcast] On the Record: Optimism Fluctuates Among Tariff Concerns and Low Commodity Prices

Can Ethanol Pump Up Commodity Prices & Get Farmers Spending Again?