Only 40% of dealers expect some growth in their precision farming sales due to continuing headwinds in agriculture.

Increasing the revenue stream from the sale of precision farming equipment and service in 2016 is expected to remain a significant challenge for North American dealers. At the same time, according to Precision Farming Dealer’s 2016 Benchmark Study, 40% of the total survey respondents are confident that they’ll be able to increase revenue during the current sales year.

Only 21.1% of dealers expect any fall off in revenue, a considerable improvement from last year’s results when 35.5% of dealers predicted declining revenues.

When it comes to forecasting strong growth, however, fewer dealers expect a significant gain in sales dollars in the precision segment of their business. Just one in 10 dealers are projecting revenue increases of over 8% for this year vs. 18% a year ago. This marks a continuing downward trend in strong growth expectations among dealers since the 2014 survey when 30% anticipated revenue growth of 8% or more.

On the other hand, based on responses gathered during the first quarter of 2016 from 27 different states and Canada, 22.2% of dealers reported precision revenue declines of at least 8% in 2015, more than double the 10.6% projected by respondents in last year’s benchmark study. The percentage of dealers reporting a 2-7% decline in 2015 revenue was about 2% less than forecast in last year’s benchmark study, 15.1% vs. 13.3%.

While it’s not surprising to see the pace of precision revenue growth slow down, it’s worth noting a shift in the coming year in how dealers generate income. The past 3 years had seen a gradual decline in sales of hardware as the dominant moneymaker, while revenue from supplemental services steadily grew.

Dealers often point to a saturated market for precision mainstays like GPS receivers, monitors and auto-steer systems, but some are finding success selling complementary components or tapping into niche technology markets, which could explain the increase in hardware sales.

However, dealers have also acknowledged a need to decrease their dependence on core precision products as the primary profit center. This was reflected in prior benchmark studies with annual increases in revenue from precision support and data management service. 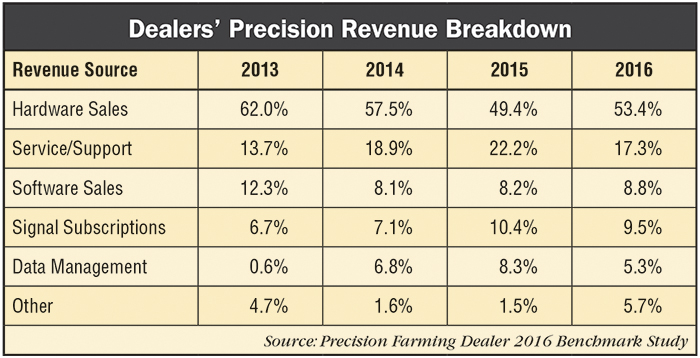 Part of the dip can be attributed to more dealers citing farm equipment salespeople as their primary precision sellers, increasing from 23.4% last year to 31% in 2016. Consistent with 2015, smaller percentages of dealers continue to rely on their parts (5.7%) or service (3.5%) departments for precision product sales.

A new category added this year was staff agronomist, and 2.3% of dealers utilize this position as their primary precision salesperson. Also asked this year was whether dealerships require agronomic training for precision specialists, with 22.8% saying they do.

It will be interesting to observe if either or both of these percentages increase in the future. In all likelihood, it will depend on how aggressive or tentative dealers are in developing agronomic services.

But this much is known — agronomists are well paid members of a dealership’s precision team. For the first time with this year’s study, we asked dealers to share salary ranges for key precision staff.

It’s also worth noting that at least 5% of agronomists and precision ag managers fell within each of the 5 different salary ranges, revealing a broad spectrum of how dealerships compensate these employees.

Last year saw a shift in dealers’ outlook for areas where they project the most opportunity to grow revenue in 5 years, with GPS and guidance dropping from first to fourth place and a momentum bump for application and planting technologies. 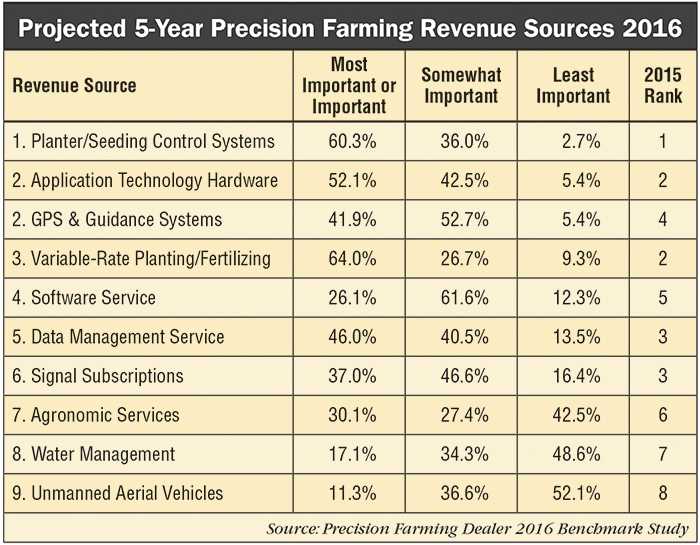 GPS and guidance rebounded in 2016, with 94.6% of respondents identifying this area as most important (41.9%) or somewhat important (52.7%), tied for second place with application technology hardware.

For the second straight year, planting and seeding control topped the list at 97.3%.

“We have to push cost savings, but it’s going to be hard to sell a $20,000 guidance system,” says a Georgia farm equipment dealer. “We have to focus on sprayer application equipment and planter upgrades. This equipment will need to be priced around $8,000 because farmers just aren’t spending money this year, and it doesn’t look good for next year, either.”

Other notable changes included a 10% drop in the percentage of dealers viewing data management service and signal subscriptions as most important areas for revenue growth. Both tied for third place in 2015 combining the most and somewhat important outlook (89.7%), but slipped to fifth (86.5%) and sixth place (83.6%), respectively during the year ahead.

The complete report appears in the Summer 2016 edition of Precision Farming Dealer (www.PrecisionFarmingDealer.com)

Dealers Confront a Challenging Year Ahead

10-Year Outlook: Planning Ahead for the Dealership of Tomorrow