FRANKFURT, Germany — With a production turnover of €7.38 billion ($8.2 billion), the agricultural machinery industry is holding its ground in Germany in difficult times.The on going economic weakness in this industrial sector has reduced the revenue of the manufacturers of agricultural machinery and tractors in 2015 by another 4%.

Low producer prices, especially for milk and rearing pigs, have slowed down many farmers’ willingness to invest extensively. “Unfortunately, no sound growth stimulus is yet in view,” says VDMA Managing Director Dr. Bernd Scherer. The fact that the decrease in 2015 was much less than originally expected, however, “gives reason to cautious optimism.”

According to Scherer, the current development of incoming orders shows “that the export business is becoming more dynamic again, and at least partly compensates for poor domestic demand.”

This applies particularly to tractors, where the decrease amounted to only just over 2% in 2015.“In the domestic sector we faced an almost double-digit decrease, whereas there was slight growth again on the international markets.” Manufacturers of drillers, sowing machines and plant protection technology also achieved a slight increase by the end of the year because they benefited from replacement purchases.

The results in self-propelled harvesting machines were very poor; the same applies to transport, milking and feeding equipment. These sectors were forced to cope with double-digit percentage decreases.

First signs of recovery in France and Ukraine

Domestic demand amounts to 28% of the market, and therefore still plays an important role for the German agricultural machinery business.However, in 2015 sales in Germany fell by almost 6% below those of the previous year.On the other hand, with a drop of only 3%, export sales were much better.

France in particular — still the most important export market for agricultural machinery and tractors made in Germany — “has been experiencing an increase since late autumn, and is likely to move into growth again within the current year”, Scherer points out. Also Ukraine, the focus of hopeful expectations for business with Eastern Europe, gives reason for cautious optimism. “Despite all the ongoing political and economic turmoil, this agricultural country is recovering slowly, step by step, as is evidenced by an increase of 15% in investment in agricultural machinery”. Due to the decline of the Rouble and difficult financing conditions, the perspectives for the Russian market “are still viewed with reservation.”

For 2016, the VDMA expects a production turnover for German agriculture machinery companies of about EUR 7 billion, which corresponds to a further decrease of 5%. Scherer sums up that “the situation remains characterised by cautious optimism rather than distress.” After all “the fundamental conditions of the international agricultural machinery business” remain unchanged: “Reliable energy and food supplies cannot be achieved without us.” 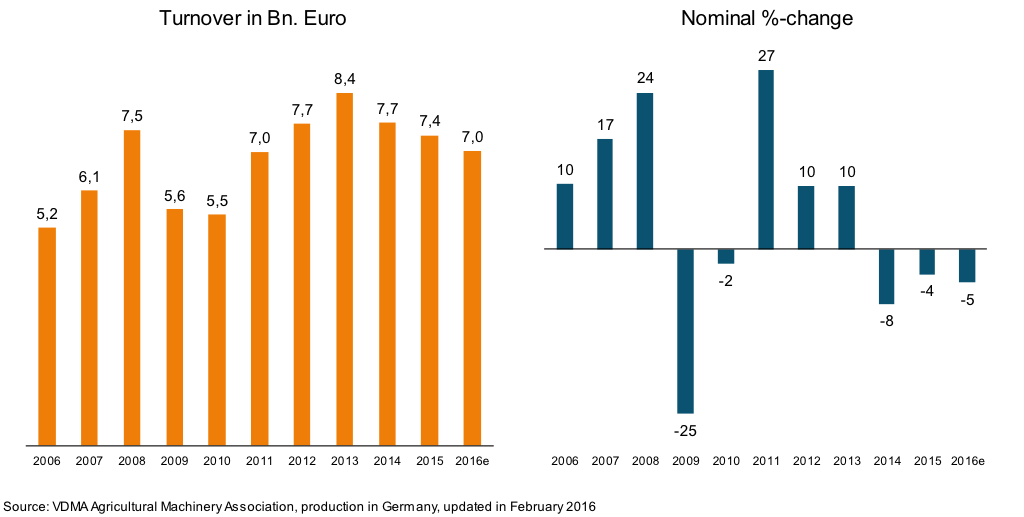