“Our second quarter results reflect the significant challenges caused by weaker global industry demand and currency headwinds,” stated Martin Richenhagen, AGCO’s chairman, president and chief executive officer. “AGCO’s performance demonstrates our ability to deliver solid results in a weaker industry environment. The quarter was highlighted by the successful reduction of our expenses and company inventories. By reducing production hours approximately 22% compared to the second quarter of 2014, our June 2015 inventory levels were substantially lower than our position at June 2014. In addition, our expense reduction actions have been largely completed resulting in lower factory overheads and selling, general and administrative expenses compared to a year ago. Improving our products and service levels for our customers remains a top priority. These improvements and a successful release of many new products with advanced technologies have been well received by our customers, making AGCO very competitive in the market.”

“During the first half of 2015, lower commodity prices and the expectation of reduced farm income have pressured global sales of farm equipment,” continued Mr. Richenhagen. “Grain prices continue to be highly sensitive to 2015 crop production forecasts and will likely remain volatile throughout the growing season. Industry retail sales in North America declined with a significant drop in high-horsepower tractors, combines and sprayers. Growth in hay and forage equipment and small tractors, due to healthy conditions in the livestock sector, has provided a partial offset to the decline in large agricultural equipment. In Western Europe, margins for dairy producers remained weak and lower commodity prices kept market demand soft from the row crop segment. Industry sales declines were most pronounced in the United Kingdom, Finland, France and Germany. Reduced industry sales in South America were the result of lower demand in Brazil due to softness in the sugar sector, weakness in the general economy and changes to the government financing program. Our long-term view remains optimistic with expanding demand for grain supporting farm economics and healthy growth in our industry.” 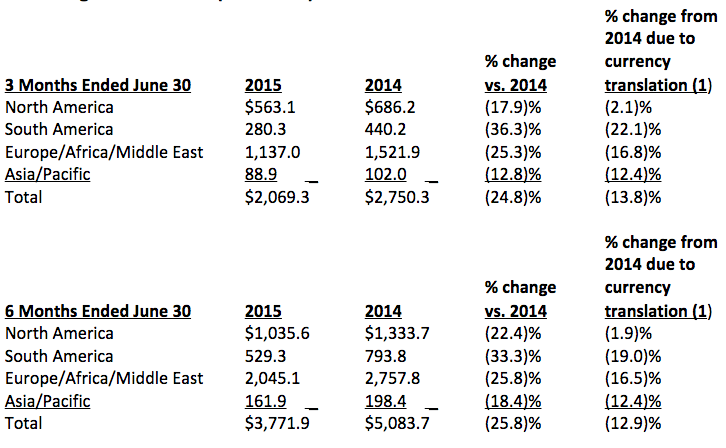 Net sales in the South American region decreased 14.3% in the first 6 months of 2015 compared to the first half of 2014, excluding the impact of unfavorable currency translation. Sales declines in Brazil were partially offset by sales growth in Argentina and other South American markets. Income from operations decreased approximately $29.5 million for the first half of 2015 compared to the same period in 2014 due to lower sales and production volumes, as well as a weaker mix of sales.

Weaker global demand for agricultural equipment and the unfavorable effect of foreign currency translation are expected to negatively impact AGCO’s sales and earnings in 2015. AGCO’s net sales for 2015 are expected to range from $7.7 to $7.9 billion. Gross and operating margins are expected to be below 2014 levels due to the negative impact of lower sales and production volumes along with a weaker sales mix. Benefits from the company’s restructuring and other cost reduction initiatives and a lower tax rate are expected to partially offset the volume-related impacts. Based on these assumptions, 2015 earnings per share are targeted at approximately $3.10, excluding restructuring and other infrequent expenses.