The nation's farmers planted the largest soybean crop on record this year by devoting millions of acres of land to the crop that had been used for growing corn, the U.S. Dept. of Agriculture said Monday. 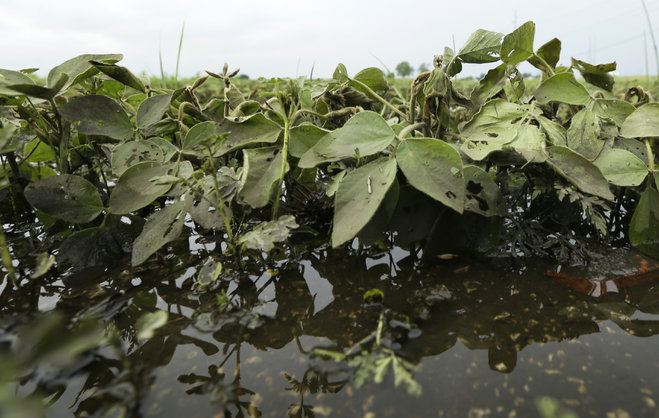 Soybean plants sit in a flooded field farm field, Monday, June 30, 2014, near Dallas Center, Iowa. The U.S. Dept. of Agriculture, in a report released Monday, says farmers are planting the smallest corn crop since 2010 but as expected have planted the largest soybean crop on record. (AP Photo/Charlie Neibergall)

"Corn might be king in the U.S., but soybeans are knocking on the palace door," said Grant Kimberley, a corn and soybean farmer near Maxwell in central Iowa and director of market development for the Iowa Soybean Assn. "The increase of soybeans has been dramatic the last couple of years here and I think the increased protein demand worldwide has a lot to do with that."

About a third of the U.S. soybean crop is exported to China, where there's a large demand for soybeans to feed hogs, poultry, and dairy cows.

The change in planting was also due to a drop in corn prices and rise in soybean prices.

For much of the last decade, farmers in the primary corn and soybean growing states of the Midwest had greater profit potential with corn, the strong market driven largely by increasing demand from the ethanol industry. Corn prices surpassed $8 a bushel in August 2012, when a drought that gripped much of the nation reduced the supply of corn amid high demand.

As corn prices remained strong, farmers planted more acres to take advantage of higher profit. Acres planted in corn climbed and in some cases, farmers strayed from the common practice of rotating fields from soybeans one year to corn the next. For a few seasons, some planted corn followed by corn, which often decreases the per-acre yield of the crop because it doesn't allow the soil to recover. Corn needs an abundance of nitrogen in the soil to flourish, and soybeans increase nitrogen levels in soil. Insect problems including corn rootworms also can increase when corn follows corn in a field, increasing chemical costs.

"We did increase corn acres a lot and there has been some switchback based on economics and guys are just getting tired of that corn on corn. It's a tough thing to handle," said Kevin Scott, who farms 2,500 acres in corn and soybeans near Valley Springs, S.D., about 15 miles east of Sioux Falls.

"Farmers are going to grow what's most valuable to them and corn and soybeans work a little bit better than wheat in that area right now," Scott said.

Corn prices declined throughout last year, to below $5 per bushel. They saw a brief increase to above $5 in April but since then have fallen $1 and remain around $4.20

Soybean prices, however, have mostly climbed since 2012, from around $13 to nearly $14 per bushel.

Many farmers indicated this year that they would return to their corn-soybean crop rotation to both replenish nitrogen in the soil and take advantage of the increased profitability of soybeans.

Even with reduction in corn planting, it will still be the fifth-largest corn acreage planted since 1944, the USDA said.

Many corn and soybean growing states have seen a stormy spring and too much rain has left some fields drenched and water pooling. That impact is yet to be seen, but it could cut into the actual number of corn and soybean acres harvested this fall.

The USDA reports that 76% of the corn crop is in good to excellent condition, compared with 63% last year.

Soybean plants also are faring better than average with to 83%t emerged by June 15, with progress equal to or ahead of the normal pace in 14 of the 18 major growing states, the USDA said.

Less Than One-Quarter of U.S. Corn Rated Good or Excellent