Considering that farm real estate (land and buildings) is the single largest asset on the farm-sector’s balance sheet, trends affecting farmland values are always a good thing for ag machinery dealers and manufacturers to keep an eye on. Right now, it appears farmland values have reached their zenith and will begin to plateau or decline somewhat.

An Extended Run Up

In a September 2, 2013, report, Andrew Swenson, farm and family resource management specialist at North Dakota State Univ.’s Agribusiness and Applied Economics Dept., said, “No one knows the future, but there is a good possibility that we have seen the last of the rising land value reports for a while.”

Swenson goes on to point out that, “It has been a historic run that culminated with an exclamation mark. On August 2, the U.S. Department of Agriculture reported results from a June survey showing average North Dakota cropland values at $1,910 per acre, which was a 41.5% increase from the previous year. At 30.2%, South Dakota had the next highest increase. The national average was 13%.”

According to Swenson, in 2003, North Dakota cropland was less than one-fourth, $460 per acre, compared with its current value. During the past 10 years, it has averaged an annual increase of nearly 16%. During the past 100 years, the closest comparisons to this multiyear increase in values were 1973 through 1981 and 1942 through 1949.

Investment in U.S. farmland is still competitive with alternative investments, but the era of extremely low interest rates and extraordinarily high commodity prices is drawing to a close, according to a new report from the Rabobank Food & Agribusiness (FAR) Research and Advisory Group.

“We’ll likely see lower commodity prices this year, but they aren’t going to be low enough long enough to substantially impact land values over the coming year or so,” says report author and Rabobank Food & Agribusiness Research and Advisory (FAR) senior analyst, Sterling Liddell. “In the short term, strong farmer balance sheets and high rental rates will support current levels. However, decreasing commodity prices will keep the values from accelerating as rapidly as they have been.”

The report, “Land Values Peaking Out — But Not Down,” finds in the medium term, the single greatest risk to U.S. agricultural land values is looming higher interest rates. Interest rates have been increasing through the first half of 2013, but based on the current Federal Reserve policy, a significant increase isn’t expected until 2014 or 2015.

“We are entering an era where planning how you’re going to pay for your land is likely to become as important as planning for marketing your crop,” notes Liddell.

The report forecast finds a decline in land values in the central U.S. of 15-20% over the next 3 years. In the Western and Southeast U.S., the decline will be less marked than in the Midwest. The key determinant in the susceptibility to land value changes is an area’s reliance on grain and oilseeds. While an increase in interest rates will have a similar impact on agricultural land values throughout the country, the amount of change will depend on the type of crop production and proximity to urban areas.

Three of the major Federal Reserve districts that cover major agricultural regions reported on the current situation in each, which included current trends in farmland values. Here is a summary of each of their reports. 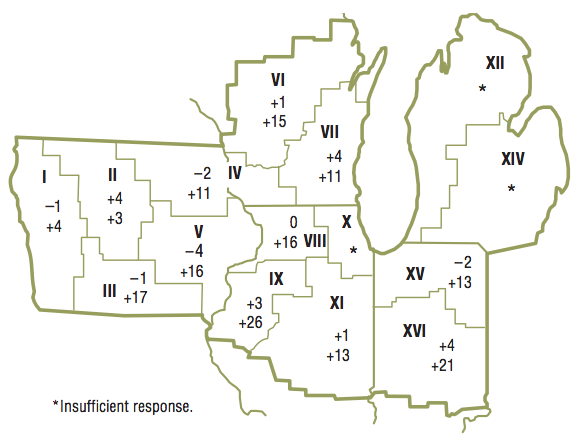 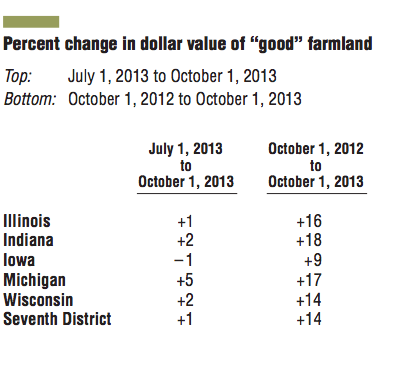 On a year-over-year basis, farmland values in the Seventh Federal Reserve District gained 14% in the third quarter of 2013. However, the return of drought seemed to temper the year-over-year gain in Iowa farmland values. There was a 1% increase in “good” agricultural land values in the third quarter relative to the second quarter of 2013, according to the 195 agricultural bankers that provided responses for the October 1 survey. 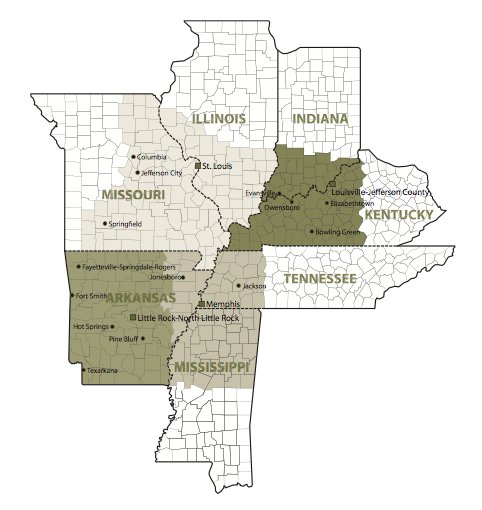 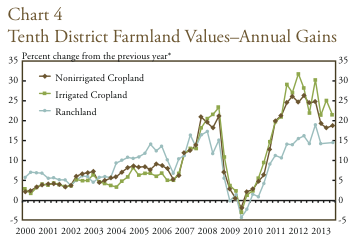 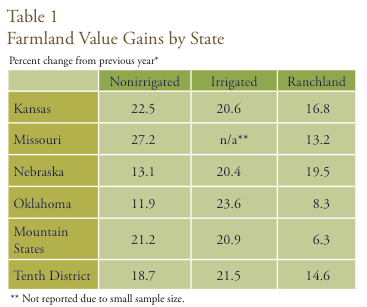 Farmland value gains have continued to outpace increases in cash rental rates, highlighting the potential for a future adjustment in farmland values. The ratio of non-irrigated cropland values to cash rents, historically less than 20, recently reached 27 in the District, according to survey results.

This district includes Colorado, Kansas, Nebraska, Oklahoma, Wyoming, the northern half of New Mexico and the western third of Missouri.