For Case IH dealership Binkley & Hurst in Lititz, Penn., helping others in need is just the way things are done. When a major blizzard in February destroyed six greenhouses at Grassy Hill Farm outside New Haven, Conn., they didn't hesitate to help out. Their caring and generosity helped save a farmer's livelihood. 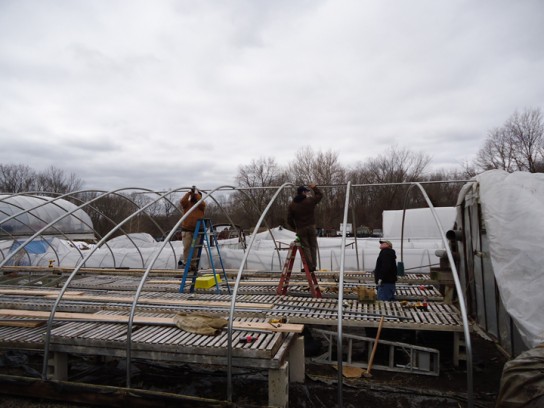 How does the Case IH dealer in your area help others? Share your stories with us.

Joseph Moncheski has been a Binkley & Hurst customer for more than 20 years, buying parts through them for his Farmall tractors. The Moncheski family's roadside stand sells sweet corn, beans, peas, pumpkins, peppers and other vegetables in addition to potted plants, such as geraniums and impatiens. They also sell their product to some local grocery stores. Grassy Hill Farm celebrated their 100th anniversary in 2010.

After the blizzard, Moncheski called Chuck Sauder, Binkley & Hurst Parts Manager, and said that the storm had destroyed all of his greenhouses, which are essential for starting seeds in the spring. A few of the greenhouses were somewhat useable but still would need work. The family had had to crawl on their stomachs to reach hay for their livestock. Moncheski was discouraged-he was going to need to start growing plants for this year's crop, and without a greenhouse, his livelihood was at stake.

"I could hear in his voice that things weren't good," Sauder says.

The folks at Binkley & Hurst decided that they were going to give back by helping Joe. The employees pitched in funds toward a new greenhouse for Moncheski, raising nearly half the amount needed. On a Saturday, a group of seven Binkley & Hurst employees, some of whom had never even met Joe before, picked up the greenhouse at a local supplier. Using the dealership's semitrailer, they took the greenhouse on the four-hour drive to Joe's operation and assembled the structure on site.

Moncheski was very grateful for everything, and overcome with emotion. "I can't thank Binkley & Hurst enough," says Moncheski.

"We're very humble about helping Joe out," says Sauder. "We didn't do this for the publicity. It doesn't matter how much equipment Binkley & Hurst sells-how we treat people and help others is far more important."

Today, Joe's early parsley and pepper seedlings are going strong. He expects they will be on schedule with maybe a week's lag time.