Farm Household Income is Diverse in Sources and Levels

Because of the USDA’s broad definition of a farm, the population of farm households is economically diverse. In 2011, households of the principal operators of commercial farms — farms with annual gross sales of $2a0,000 or more — had a median total income of $127,009 and a median income from farming activities of $84,649. In contrast, households associated with intermediate farms — those with less than $250,000 in sales whose principal operators considered farming their primary occupation — typically have a loss from farming.

Of the three types of farm households, only intermediate farm households had a lower median total income than U.S. households overall ($45,889 compared with $50,054). This chart is based on data found in the Farm Household Well-being topic page on the ERS website, updated November 2012. 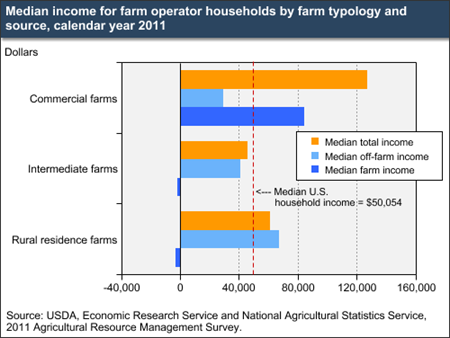