Food prices usually move in the same direction as fuel prices, often with a slight lag as fuel costs are incorporated into food prices. However, while the direction is often the same, the sizes of the price swings differ. Over the last two decades, motor fuel prices have experienced both double-digit annual increases and similarly large annual decreases, with an average price change of 11.5 percent per year.

Food prices, on the other hand, have only posted annual increases in the last 20 years of between 1 and 6 percent, for an average annual increase of 2.7 percent. Home energy prices, which incorporate other sources of energy, are also considerably more volatile than food prices.

More information on food price changes and forecasts can be found in the Food Price Outlook data product, updated September 25, 2012. 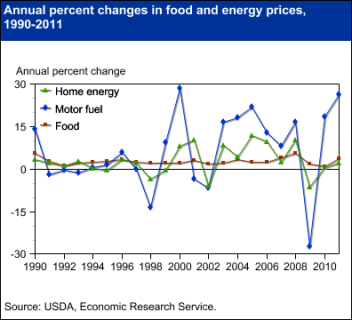