100,000th Versatile Rolls Off the Line in Winnipeg

At the same time that Buhler Industries celebrated its history on October 26 with production of its 100,000th Versatile tractor, it also marked the start of its future with the launch of its newest tractor models. 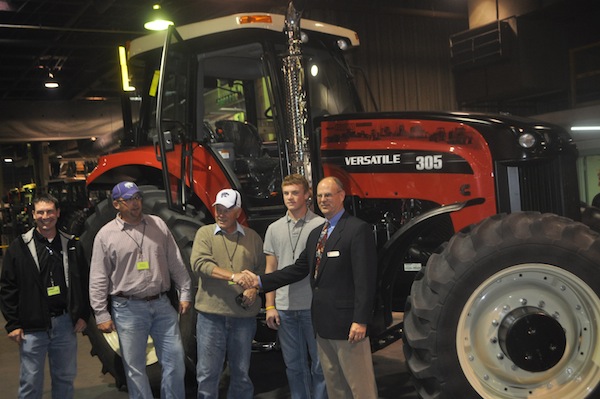 Darrell Steiner (far right) presented Buhler Industries' 100,000th Versatile tractor to its new owners during a ceremony at the company's headquarters in Winnipeg, Manitoba, on October 26. Included in the ceremony were (l-r) Jon Yost, Yost Farm Supply, Goodland, Kan., the dealership that sold the tractor; Chris, Rodney and Cade Bracelin of St. Francis, Kan., the farmers who purchased the new tractor.

It's was huge milestone for the Canadian farm equipment company when it handed over the keys to the 100,000th Versatile tractor ever built to a Kansas farmer. The Versatile tractor brand has had numerous owners during 46 year history, and those 100,000 machines include some built for New Holland, Fiat and Caterpillar.

Peter Pakosh and Roy Robinson of Versatile Manufacturing Ltd. built the prototype of the company's first "popularly priced" articulated four-wheel drive farm tractor in 1965. The two Canadian entrepreneurs then put the Versatile D100 into full production in the fall of that year.

According to Grant Adolph, Buhler's COO, it took a lot of time, materials and human effort to reach this milestone, including:

Darrell Steiner, director of sales for Buhler, made the presentation of the commemorative tractor to Rodney, Chris and Cade Bracelin of St. Francis, Kan. The three-generation farm family works 10,000 acres of wheat, dryland and irrigated corn, grain sorghum, and run about 600 stocker cattle a year. This is the 22nd Versatile tractor the family has owned.

Jon Yost of Yost Farm Supply, Goodland, Kan., the dealership where the Bracelin's purchased the tractor, was also on hand for the ceremony. 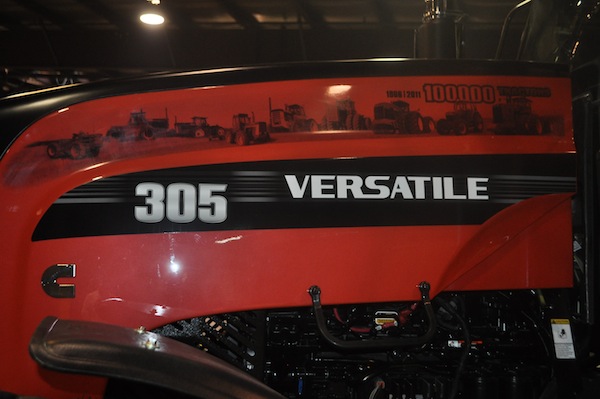 Buhler Industries' 100,000th Versatile tractor is a 305 row-crop unit adorned with chrome-plated exhaust grill, exhaust tip and steps, as well as a special mural decal featuring a sampling of all Versatiles built since 1966.

Buhler used the opportunity to roll out its newest generation of tractors with Cummins iT4 engines. The new lineup includes four-wheel drive tractors from 350-550 horsepower.

Buhler had announced earlier that it would utilize Cummins QSX 11.9L engines for models 350 and 400, and QSX 15L engines for its 450 and 500 models with exhaust gas recirculation systems (EGR) to meet Tier 4 interim emission requirements.

In addition to the engines, which are built exclusively for Versatile tractors, the new equipment will also feature Caterpillar powershift transmissions.

The flow capacities of the tractors' hydraulics were increased to 58 gpm standard flow and are available with a high flow option of 113 gpm.

In addition to the new powertrains and hydraulics, the newest Versatile tractors were redesigned from the ground up. The new sloping hood increases forward visibility by 35% compared with previous models. The redesigned cab offers 85.9 square feet of window glass and is 14% roomier than previous models. 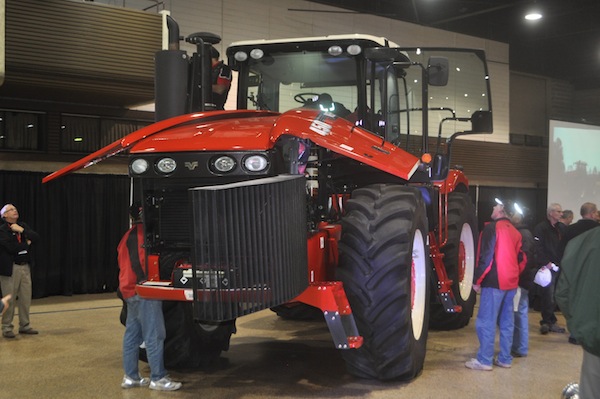 Buhler Industries' equipment owners and dealers were on hand to view the launch of the company's new lineup of Tier 4 interim tractors, which were redesigned for 2012.

In addition to being roomier than most tractors in their horsepower range, the new Versatile models also include many of the creature comforts that growers are looking for. One of the features is a new right-hand console that provides fingertip control of all the tractor functions.