By Martha Mintz posted on September 29, 2011 | Posted in Manufacturer News 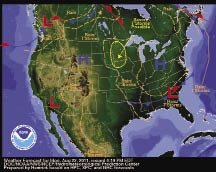 Meteorologists look into the future every day. While this afternoon's weather is usually an easy call to make, things get a little dodgier with a 10-day forecast, much less the 10-year forecast.

But veteran Iowa State Univ. meteorologist Elwynn Taylor didn't flinch when Farm Equipment tasked him with providing a weather outlook for the next 10 years.

"There are indications that the climate will become increasingly volatile over the next 20 years. Dry years will be drier and wet years will be wetter. Volatility may not be permanent, but it will be a fixture for the next 10-20 years," Taylor says.

Current volatile conditions are no surprise to Taylor. He says they're classic La Niña weather patterns. The past four winters have been snowier and the springs wetter, causing flooding. But Taylor believes climate change may cause the La Niña and El Niño weather cycles to become stronger.

"This is a more volatile cycle than we expected 10 years ago when we went through the last 10-year La Niña-El Niño cycle. But when we look back, it lines up with the 89-year natural climate cycle, repeating the extremely volatile weather we saw in the early 1900s as we approach the cycle again," Taylor says.

Higher temperatures — whether caused by natural weather cycles or human impact — will feed higher precipitation in the Midwest. Taylor explains that air moving from the Gulf of Mexico at 100% humidity will carry 17% more water with a 5-degree temperature increase over today's norm. Seventeen percent more water in the air equates to 17% more precipitation.

The Midwest has seen approximately a 10% increase in annual rainfall since the 1950s, pushing rivers out of their banks more frequently than ever before.

"A 10% increase in precipitation doubles the stream flow of local rivers, putting them out of their banks six times more often," Taylor says.

Farmers in the future hurt by multiple floods may be reevaluating what acres get planted to high-value crops.

"Lands that flood will do so more frequently, so producers may have to switch to planting a lower-value crop on those at-risk acres," Taylor says.

Another pressing decision will be what machinery to use and how to use it.

"When weather becomes more erratic, it's because the winds are stronger. We will see stronger winds and more precipitation, which will make protecting the soil from erosion a more challenging job," Taylor says.

Originally published as a special report in the September 2011 issue of Farm Equipment.

Since 2011, Martha has authored the highly popular “What I’ve Learned About No-Till” series that has appeared in every issue of No-Till Farmer since August of 2002.


Growing up on a cattle ranch in southeastern Montana, Martha is a talented ag writer and photographer who lives with her family in Billings, Montana.