So far, so good. According to the latest (September 10) report from USDA, agricultural commodity prices are on the rise and look strong for the last quarter of 2010 and going into 2011.

The ag agency has also raised projections for net farm income and cash receipts for 2010.

Livestock receipts are expected to increase $17.7 billion in 2010, led by a 26% surge in cash receipts for dairy.

Here’s a summary on USDA’s expectations for commodity pricing from its September 10 World Agricultural Supply and Demand Estimates (WASDE) report.

SOYBEANS — The U.S. season-average soybean price range for 2010-11 is projected at $9.15 to $10.65 per bushel, up 65 cents on both ends of the range. Through the middle of September, soybean prices are up 7% year-over-year compared with the same time last year.

COTTON — The average price received by producers is forecast at 63 to 77 cents per pound, 2 cents above the last 11 months. The midpoint of the interval, 70 cents per pound, would also be the highest price since 1995-96. 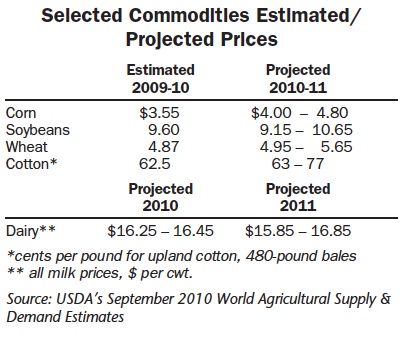